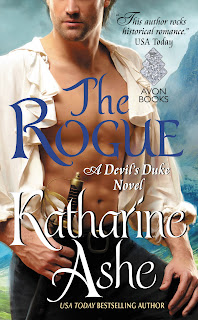 THE ROGUE – Katharine Ashe
A Devil’s Duke Novel
Avon Books
ISBN: 978-0-06-241273-7
March 2016
Historical Romance
Scotland – 1822
Lady Constance Read must wed soon in order to obtain a substantial amount of money. She’s not happy about that mostly because there is only one man she wants, and he is unobtainable after their meeting six years previously. Independent and unafraid, Constance is also a member of The Falcon Club, its mission to find missing persons and return them home. She is unaware who the director is, but as the Sparrow, she maintains a correspondence with their nemesis, Lady Justice. However, Constance’s father, the Duke of Read, is demanding a marriage and has arranged one with a neighboring duke, whose evil reputation precedes him. Then who rides into her father’s castle, but the very man who broke her heart six years ago.
Evan Saint-Andre Sterling is still reeling from his brother’s death, and arrives at the Duke of Read’s castle to discover that the duke wants Saint to give his daughter sword fighting lessons. The very woman who tore his heart apart. Despite arguing otherwise, Saint is forced to accept the challenge, and the steam begins to rise almost immediately between him and Constance.
In the meantime, young women are disappearing, and Constance wants to infiltrate the secret society that she suspects is responsible. Unfortunately, she must be married in order to join. How can she wed the controlling neighbor and achieve her goal, though? Can she count on Saint to help her? She knows he is only there because of something her father is holding over his head.
Book One of the Devil’s Duke Series is fast paced and filled with adventure and romance. Constance and Saint fight their attraction to one another, both unsure of the other’s feelings. Secondary characters must be watched, for surprises ensue. An exciting mystery, and a sweet love story, THE ROGUE is not to be missed.
Jani Brooks
at April 04, 2016