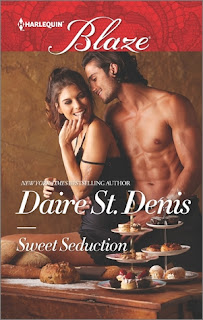 Bakery shop owner Daisy Sinclair is going through a rough patch in her life right now, with the only good thing being her shop’s success. It’s even going to get better with the arrival of a newspaper’s food critic at the shop. But her meeting with the critic turns into an embarrassment when he walks into her office while she’s naked. It doesn’t help that Daisy feels a thrum of heated pleasure when the man peruses her curves. After all, getting involved with a man who’s about to rate her shop can only lead to trouble.

Jamie Forsythe isn’t exactly the food critic; his identical twin brother Colin has that distinguished honor. Jamie is filling in for Colin because his twin suddenly can’t taste food and asked that he go check out the place for him. Jamie is intrigued by Daisy, much more than the fact that he saw her delectable body. He knows that he needs to come clean with her as to who he is, but how will she react? And once that little problem is out of the way, can he start a pursuit of her, where he hopes things lead right to the bedroom? But their relationship has a very serious roadblock placed in the way: Jamie is the lawyer assigned to represent Daisy’s soon-to-be ex in the divorce proceedings. The one where the bakery is part of the marital assets.

There’s sweet music being played between Daisy and Jamie in SWEET SEDUCTION, but they may be headed to a discard pile. Daisy’s life has been baking and opening the bakery, but a bad choice in a husband could lead to her losing it all. She’s in debt, but her ex wants half of the value of the property and she doesn’t have the funds. Her tactics against her ex has been to be belligerent and trying to ignore the consequences. Jamie is an attorney (with a few side gigs covering for his brother as a food critic) and didn’t realize his firm represented her ex until after the attorney assigned bailed out of the company and he took over. By this time, Jamie has already had a taste of the sweet and sexy Daisy, so now he’s in a tough bind. Help his client…or Daisy?

After the initial miscommunication over Jamie’s identity, he and Daisy still have to get over trust issues. She just came out of a bad marriage, while he still has bad memories over what he sees as a failure to protect his late sister from domestic violence. Because of his sister, he tends to be overprotective of women, while Daisy prides herself on being independent. To say the two clash is an understatement. But the one area that they do agree on is that they are well matched sexually. Jamie makes her feel special and wonderful, something that was lacking in her marriage and had led her to have self-esteem issues. With Jamie’s tender touch, Daisy is feeling on top of the world…until she learns he represents her ex and will help force her to sell the bakery. But Jamie decides to help her out in a roundabout way. Will Daisy save her bakery?

Steamy love scenes and teasing sexual innuendo scorch up the pages in SWEET SEDUCTION by Daire St. Denis. The chemistry between Daisy and Jamie sizzles and readers will be rooting for them to make it work out. Grab a comfy chair and a cold drink, then grab a copy of SWEET SEDUCTION.