Spotlight on KAT MARTIN with a contest.....Win a copy of INTO THE FURY 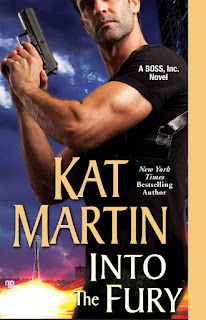 Tell us about your newest release.
Here’s how I describe it:  Take death threats against ten of La Belle's most beautiful lingerie models as they travel the country on a widely publicized fashion show tour, mix with macho bodyguards, throw in murder, mayhem, copycat killers, and millions of dollars in diamonds, and you have INTO THE FURY, my newest Brodie novel.   This is Ethan’s story as he goes toe-to-toe with Valentine Hart in a novel of intrigue, action, and steamy romance.

What was one of the most surprising things you learned in creating your story?
That lingerie modeling is a tough business--think Victoria’s Secret--and that the women in the top spots are extremely smart as well as beautiful.

How long have you been writing?
Over thirty years.

What authors or friends influenced you in helping you become a writer?
My husband was the greatest influence, my boyfriend at the time.   He had already written a novel but couldn’t get it published.  I started helping him and realized writing was what I wanted to do.  My close friend Meryl Sawyer, who was writing Romantic Suspense at the time, was also a very strong influence.

What does your family think about your career as a published author?
I don’t have much family left.  My brother and sister don’t read!  My sister-in-law is a fan.  My hubby is a writer, which makes communication about writing part of our lives.

Besides writing, what other interests do you have?
I love to travel.  We get to Europe as often as possible, we’ll be in Brussel’s this year.  I’m really looking forward to the trip.

Can you tell us what is coming up next for you?
Up next is INTO THE WHIRLWIND, out May 31, followed by INTO THE FIRESTORM.  They’re both BOSS Inc. novels set around a Brodie owned security firm in Seattle.  Ethan is a bodyguard.  Dirk Reynolds is a private investigator, and Luke Brodie is a bounty hunter.

How can readers connect with you online?
Webpage  is www.katmartin.com
Twitter is   @katmartinauthor
Facebook is Kat Martin author


Hope you will join me!

About INTO THE FURY

Take death threats against ten of La Belle's most beautiful lingerie models as they travel the country on a widely publicized fashion show tour, mix with macho bodyguards, throw in murder, mayhem, copycat killers, and millions of dollars in diamonds, and you have INTO THE FURY, Kat Martin's newest Brodie novel.
Ethan Brodie goes head-to-head with Valentine Hart in this novel of intrigue, fast-paced action, and steamy romance.

WIN A COPY OF INTO THE FURY.

New York Times bestselling author Kat Martin is a graduate of the of at where she majored in Anthropology and also studied History.   She is married to L.J. Martin, author of western, non-fiction, and suspense novels.
Kat has written more than sixty-five novels.  Sixteen million copies of her books are in print and she has been published in twenty foreign countries, including , , , , , , , and .
Born in , , Kat currently resides in , on a small ranch in the beautiful Sapphire mountains.
Her last 10 books have hit the prestigious New York Times bestseller list.  AGAINST THE WILD, AGAINST THE SKY, and AGAINST THE TIDE her latest release, took top ten spots.

cheryl c said…
I have enjoyed many of Kat's books, and this one sounds like another winner.
6:04 PM

Patoct said…
Thanks for the contest. I liked you on fb.
patoct
5:21 AM

Karielle Stephanie said…
I can't wait for Kat's newest book to come out - thanks for the giveaway!
11:46 PM

Laurie G said…
I would love to read Valentine and Ethan's love story. Sounds exciting!
Models, millions and murder!
5:20 AM