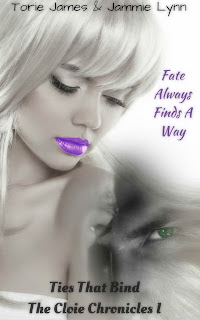 1.  Tell us about your newest release.
Ties That Bind is the beginning of a new series, called The Cloie Chronicles.
The main character of Cloie is very precious to me. As are ALL of my characters! However, Cloie is the sole reason I found courage and strength to once more pursue my dream of writing. As a huge fan of mythology, I eventually tumbled into The Dark Hunters Series, by Sherrilyn Kenyon (*swoons* total fangirl!!) in which mythology plays a huge part.  One of the main protagonists is the younger half brother to the Greek Fates: Atropos, Lachesis and Clotho. They are referenced here and there, but not in a favorable light. No one really has anything good to say about those Goddesses now that I think about it!
I decided to change that after I joined a DH role play group and ended up with Clotho...Cloie...as my character. I began to ask myself what her real story was. I refused to believe, as all of mythology would indicate, that she was cold, unfair and vicious, playing with lives like a child with toys. There was more to Cloie...I just knew it.
One of the most amazing people I know, I met through roleplay in the DH world.  The person behind this particular role play character went on to become a very intense and major part of Cloie herself and I am very proud to have her input and work as my writing partner on this series. Without Jammie Lynn, there would be far less to this story overall. She's a true soul sister.
One of my greatest joys has been bringing Cloie to life and sharing her story with the world. She has taught me there are differences between who we are and what we do. She has changed my life in countless ways and helped me change my own stars.
And we're still going strong...
2.  What was one of the most surprising things you learned in creating your story?

Crazily enough, the thing that astounded me the most is that there is a character very close to Cloie's heart who loathes her existence to the point of obsession. And it's not Soren. Or Dagr.
3.  Do you have any interesting or quirks or rituals?

I need a bag of mini Rolo's, endless coffee, my sonic screwdriver and lucky lightsaber to write. No kidding.
4.  What authors or friends influenced you in helping you become a writer?

I've been entirely blessed in my circle of friends and family. They've had my back since the beginning, nursing my doubts and insecurities with gentle affection, tremendous sarcasm and endless patience. And I've met so many fellow wordsmiths who I consider inspirations, it's my privilege to call upon them and count them among my supporters!
5.  What does your family think about your career as a published author?

I love to spend my free time travelling time and space with this extraordinary person, we call him Raggedy Man. We’ve visited ancient Mesopotamia, future Mars and had cocktails on the moon.

Currently, I'm working on the 3rd book of my New Camelot Series and about to release another new series on the world called Fractured Fantasies. Think Twilight Zone with a heavy dose of sex. I'm also working on Cloie's next book with my writing partner, Jammie Lynn!

I love having stalkers! Don't be shy... you can find me at the following:

Ties That Bind: The Cloie Chronicles, Book One
By
Torie James
Author Bio:
I've loved reading since I was old enough to hold a book in my lap. While my friends were out playing, I was generally curled up nearby falling down rabbit holes, catching second stars to the right, and stepping through wardrobes into mysterious lands and countless adventures. When those stories ended, I made up my own and kept going.
This later on translated into a strong passion for writing that has helped me keep my feet on the ground and my head in the clouds.
Lover of Dr. Pepper, all things chocolate, and Duran Duran, my dreams finally became a reality with the publication of Timeless Night, with the amazing people at Breathless Press.  Timeless Night begat Timeless Desire. I'm currently working on the third book in the series, Timeless Surrender. I've also written several short erotica tales called Fractured Fantasies on top of beginning the sequel to Ties That Bind: The Cloie Chronicles with my writing partner, Jammie Lynn.

For thousands of years, the Gods of Olympus and Asgard have warred, each determined to establish dominion over the Earth. Both pantheons grow weary and in a slick unprecedented move, Zeus and Odin design a plan to unite their realms.
Clotho, the youngest Greek Fate bears many burdens and secrets but none greater than the one she doesn't even realize she carries.
Soren, a proud and ancient Viking warrior holds the power of demons and gods, but not by his own choice. More importantly, he holds the heart of the very woman who broke his own.
Dagr, grandson of Odin and heir to Asgard, desires little more than ultimate power and when offered Cloie's hand in marriage to cement his place, eagerly agrees. But he has his own reasons for wanting the baby Fate in his grasp...and bed.
Passions collide and betrayals abound when the First Evil is unleashed on Gods and man alike. Cloie holds the key to all destruction and salvation.
Her secret will save the world...

Excerpt:
"Smile, child. This is your wedding day."
Cloie stared straight ahead, refusing to meet Zeus's gaze, although she heard thick lust coloring each word. The leisurely stroke of his hand swept down her arm in proprietary fashion, lingering along the gentle swell of her right hip before he stopped.
“I’d smile were the groom of my choosing, Papa.”
Zeus’s fingers curled around the nape of her neck, holding her in place. The stinging, heat of his powers seared her flesh with lacerating pain, causing her to flinch once, then grow still. She refused to shed a tear or make a single sound. Despite the burning agony, she wouldn't give her stepfather the satisfaction.
“I know well what your choice would be, Clotho. I’m about to make you Goddess Queen of the Norse Pantheon and you still defy me! For your idiot pet!" Zeus’s hot breath washed over her ear, his lips brushing the delicate shell. His grip on her neck tightened, the acrid stench of scorched flesh choking her.
“He’s not my pet.” She bit out, coughing.
“He is nothing! He lives because of Odin's stupidity and your defiance! And you would be his whore!”
“Better his whore than your daughter.” Defiance flared in her voice.
Snarling, the Greek King of the Gods shook her like a rag doll, forcing her to meet his blazing cerulean eyes. “You will marry Dagr. You will act as befits the daughter of Zeus and a Queen of Asgard. If at any time, I sense Dagr’s unhappiness with this union or you, I myself will destroy Soren. If you disobey me, the same. I see defiance in your eyes, Clotho. And arrogance. I can't kill him but I can make him wish for death. His quality of life depends on your performance and your obedience to your loving Papa.”
Always using her heart against her. His modus operandi never wavered. It worked every time. And well the Olympian knew it.
“Then best you get me to the altar, Papa.”
Each word was laced with careful respect, all rebellion gone from her in the face of his threat. She'd harmed Soren enough, she would not allow Zeus to lay one finger on the keeper of her heart. Cloie kept her face impassive when Zeus released her, swallowing hard past the knot of anguish his hands on her skin had caused. Clever God, none would see the wounds he'd inflicted with her hair down as it was.  Unbound hair to attest to her innocence. Ha!
“I will marry Dagr. I will be a most worthy Queen and helpmate. I shall unite Norse and Greeks together as no other union has. I will do all of this and more.” She slid dainty fingers around his elbow while he used his powers to swing aside the silky curtains of the white tent Hera insisted she have to prepare in. “But by my own word, if you ever lay a harmful hand on Soren, it will be the last time you have such.”
“Empty threats, child. And well you know it. Just do as I tell you and there will be no need. You’ll thank me when you are ruling Asgard.”
“Don’t you mean when you are ruling?”
“Clever girl.”

Thank you so much for having us kip 'round! Much love to all the staff at RRT!