Q & A with Carolyn LaRoche 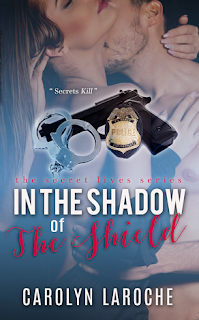 
Thank you to Romance Reviews Today for allowing me to visit with their readers once again. When I was here last month, it was to celebrate the release of Undercover in Six Inch Stilettos the first book in the Secret Lives series. Today I am back because the second in the series, In the Shadow of the Shield, is now available. In this book, Diana is mourning the loss of her police officer husband when another officer, Carter Ryan approaches her with the suggestion that Donnie's death may not have been the accident everyone wanted her to believe. Diana and Carter join forces to clear Donnie's name and in the process discover that it is possible for two damaged hearts to be repaired-and possibly love again.


What was one of the most surprising things you learned in creating your story?

What I loved most about writing this story was exploring the concept of a sort of May-December romance. Diana is not only eight years older than Carter but, being forty six, she technically falls into the middle aged category. Generally, the older-younger concept is acceptable when the man is older than the woman. It was interesting to explore the emotional roller coaster Diana travelled not only dealing with moving on from her marriage and loss of her husband but doing so with a considerably younger man. The other thing I hoped to illustrate both in the book as well as the series, is that sex and romance don't disappear when one leaves their twenties. In  Undercover in Six Inch Stilettos, Cyndi and Jason have been married ten years and have a daughter yet they are just as hot for each other as a couple of twenty somethings. They have an active intimacy that is on-going. In In the Shadow of the Shield, Diana holds a rather unorthodox job as a 900 operator and before her husband's death, they too have a great sex life. With Carter, the chemistry runs hot and the physical attraction strong. They are like a couple of teenagers, sneaking around behind the back of Diana's actual teenaged son. It was important to me to write books, and


Do you have any interesting or quirks or rituals?

I'm not really a quirky writer in that I don't have to do anything special to get in the mood to write. I am a huge procrastinator though and even when I am ready to sit to down to work, I have to do a million other things first…just because.

When I first started writing to become published, I'm not so sure most people took me very seriously. I mean, romance writing really gets a bad rap. People my mother's age think it's all about bodice ripping and people my age equate romance with erotic sex. There is nothing wrong with either but I consider those to be two extremes on the spectrum. Romance to me means happy endings. Strong heroes yes, but not necessarily heroines that depend on the hero to save them. Sometimes the female lead rescues the male. In this current age of romance, happily ever after comes in many ways, no white horse required.


Besides writing, what other interests do you have?


Writing is my number one favourite thing to do in this world. If I can't write, I want to spend time with the people I care about. My sons are very active in music and athletics so they keep us busy too. Baseball is my favourite sport-from little league to major league, I love ball games. I'm a huge fan of the ocean and spend a fair amount of time at the beach. I also crochet a little and of course, I love to read. Recently, I've been in to indie books. There are tons of amazingly talented writers out there.

As for what is coming up next, I have just finished the third book in the Secret Lives series and submitted it to my publisher. If all goes well, it will be available in the early part of next year. I've also begun to look for a home for my new series,  a contemporary romance set on the beaches of Cape Cod and involves, big surprise here, sexy baseball men not necessarily looking for love but finding it anyway.


In the Shadow of the Shield
By
Carolyn LaRoche

Carolyn LaRoche grew up in snow country but fled the cold and ice several years ago. She now lives near the beach with her husband, their two boys, two finicky cats and one old dog. When she is not at the baseball field cheering on big hits and home runs, she is busy teaching science to unwilling teenagers.
Social Media Links:
Facebook: https://www.facebook.com/AuthorCarolynLaRoche?ref=hl
Blog:  http://carolynlarocheauthor.blogspot.com/
Goodreads: https://www.goodreads.com/author/show/7734909.Carolyn_LaRoche?from_search=true
Twitter: @CarolynLaRoche
Amazon:  http://www.amazon.com/Carolyn-LaRoche/e/B005OKHIDI/ref=ntt_dp_epwbk_0
Blurb:
When a police officer falls, justice must be served.

Donnie Massey was an honest, skilled police officer. That’s probably what got him killed. When his wife Diana watches him die in front of her, the worst part is going to be telling their son, Jackson.

After a year of mourning, Diana decides it’s time to move on with their lives. The first step to getting closure is to visit Donnie’s grave. But when she gets there, she’s not alone...

Good cops are rare. Carter Ryan is one of them.

Mentored by Donnie, Carter is at the grave when his widow shows up. It may not be the best timing, but he needs her help. Carter admits the fallen shield may not have died in the line of duty, but was likely murdered while involved in a secret investigation with deep criminal ties. Diana agrees to aid in unveiling the truth. Donnie deserves that much.

The definition of insanity...

As the two work side by side, a new and delicate romance begins to bloom. But would falling for another cop be the worst mistake of Diana’s life, or the best decision she’s ever made? When the investigation leads them to an underground meth ring, their mission goes from risky to down right perilous.

After a brush with death hits too close to home, will Diana risk loving another cop? Or will their chance at happiness be forever buried in the shadow of the shield?

Excerpt:
They were standing very close. Too close. She could smell that musky soap of his again, and it was all she could do to stay where she was. He sure looked good in that uniform. Too good. She moistened her suddenly dry lips with the tip of her tongue.
“Don’t do that.”
“What?”
“Lick your lips that way. I have to get back on the road in a minute, and that might make me quit my job so I can see you do that again.”
She giggled like a schoolgirl. “Oh, you can’t do that. Your uniform is half the appeal. Don’t you know, once a badge bunny, always a badge bunny?” She tapped the badge on his chest with one finger. “Badge bunny, huh?”
In one smooth move, his arm slipped around her and his lips pressed to hers in a quick kiss. “I hate to leave, Madam Bunny, but the streets of Virginia Beach are begging to be kept safe.”
“What kind of crime is there in a resort town in the middle of the winter?”
“You’d be surprised. Hookers still got pimps to pay, no matter how cold it is. Crack heads still need a fix, and drive-bys are very popular this time of year. The discerning gangster prefers not to freeze the family jewels to get the weekly quota of shootings in.”
“I suppose that makes sense, since it was this time last year when Donnie got mixed up in that supposed meth case.” No sooner had the words left her mouth that they heard the ringing of a cell phone.
Carter let her go and dug into one of his pockets. “That’s the Louie phone number. A text message.”
“What’s it say?”
“He says he wants a pizza with his Snickers and his Mountain Dew.”
“What?”
“Hold on. Another message is coming in. It’s a photograph.”
“A photo of what?”
“Hard to tell. It’s pretty dark, but it looks like three people. He says he caught them leaving the house, and they are the same guys he saw the other night.”
“Ask him who they are.” Her heart rate picked up at the thought of a possible lead. “Are they cops?”
Carter tapped out a message and then waited for Louie to reply. “Okay, he says they left and locked the place up tight. He doesn’t know who they are, but he is certain they are the same guys he saw the other night.”
Carter typed in another message, then set the phone down on the counter by his radio. It buzzed almost immediately with a message from Louie, promising to let them know the second the men returned, as long as he could have an extra-large double cheese pie. “All right, as much as I hate to go, I need to get back out on patrol. Lunchtime is over.”
“Lunch time? Was I supposed to be a quickie on your lunch break?”
Carter grabbed his radio and clipped it back on his belt. “Trust me, baby, if that was why I was here, there would be nothing quick about it.”