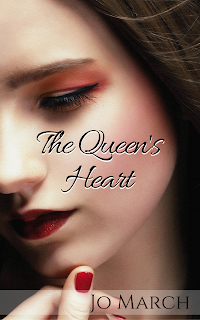 As queen of Wonderland, Clarissa should have been secure in her position, but Alice sought to change all that. A clause in the dead king's will only serves to spur on their childhood rivalry. Alice will stop at nothing to take the throne for herself.  The best laid plans can go awry though and it's only a matter of time until the true queen of Wonderland will be crowned for good.

It was interesting to take characters that I thought I knew and let them have free reign in rewriting their story. It was surprising to realize that even though I didn't necessarily like the way a character decided to portray themselves, I really enjoyed taking the journey with them.

I have discovered that there is a certain album that seems to perfectly kickstart the creative process for me and so I find that if I'm battling with my writing, all I have to do is play this album on loop and away I go!

I've always loved words, ever since I learned how to read and according to my parents, I've always written stories, so I guess you could say that words themselves influenced me! It wasn't until I was much older and finished with school that I realized that this was genuinely something you could do for a living (although that was before the eBook revolution and getting a mainstream publisher was a daunting prospect). Now I have a wonderful support system of other authors that encourage and assist each other and I love it.

I love photography and there is nothing more relaxing than taking your camera out and spending a few hours capturing whatever catches your eye.  Often, while I'm focusing on the pictures I want to take, my mind is off working out the next part of a story, so it's a win-win situation for me.

I'm working on a military themed short which I'm hoping to have available around Christmas and then to finish a full length novel that I've been working on this year.

The Queen's Heart
by
Jo March
About the Author
Jo March lives in her own Wonderland—a place filled with books, animals and plenty of ways to exercise her imagination and creativity. She cannot remember not wanting to be a writer and indulges whenever she can. She lives in Cape Town and considers it the most beautiful place in the world to live.

Blurb
Clarissa could never have foreseen the magic a simple hatter could bring to her life.

As queen of Wonderland, Clarissa should have been secure in her position, but Alice sought to change all that. A clause in the dead king's will only serves to spur on their childhood rivalry. Alice will stop at nothing to take the throne for herself.  The best laid plans can go awry though and it's only a matter of time until the true queen of Wonderland will be crowned for good.
BUY LINK: http://www.amazon.com/Queens-Heart-Jo-March-ebook/dp/B00ZYRODY8/ref=asap_bc?ie=UTF8
Excerpt
"Who are you?"
"I'm just a simple hatter, miss. Newly arrived here to ply my trade at court."
"Interesting. Well, don't let me keep you..."
At her dismissive tone, the hatter raised his eyes and stared at her for a moment. "Did anyone ever tell you that you're awfully bossy? I'm sure the queen herself isn't as bossy as you!"
"Not lately, no, and since you are new here, you may want to wait until you meet the queen to decide what she's like." Stepping to one side on the path, she cocked her head at the exit. "I believe you were just leaving?"
Slowly he walked toward her, closing the distance between them until he towered over her. Realizing that it might not be safe to be alone with this stranger, she was tempted to take a step backward, but one look at the expression on his face showed that he was expecting her to be intimidated. Resolutely she stood her ground. Staring defiantly up at him, she crossed her arms defensively across her chest.
"Am I in your way?"
"Not at all." And with that he dropped his lips to hers. The kiss was gentle at first—their mouths the only point of contact between them—but within moments, his tongue had teased her lips apart and his hands were buried in her hair, drawing her nearer. Of their own volition, her hands explored the planes of his chest through the cotton shirt he wore, and her fingers memorized every detail.
Without warning he pulled away, his breathing ragged. His gaze bore into hers and she felt as if he were reading every thought that flashed across her mind. Her heart fluttered like a trapped butterfly in her chest—the sound so loud that she felt sure he must be able to hear it. With extraordinary gentleness, he ran the back of his hand slowly down her cheek before stepping quietly past her and leaving the garden.