Promo Spotlight and Q & A with Ember Leigh, author of A NEW YORK MINUTE 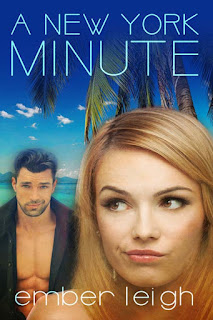 “A New York Minute, which is available via The Wild Rose Press, came out on December 11th, 2015. It’s one of my favorite tropes, enemies-turned-lovers, made all the more fun by a pair of equal-witted entertainment industry TV hosts who have no problem dishing out insults. Josh Lambert cancels Paige Alexander’s daytime TV show as his company takes over hers; and this means that she gets sent to be a news anchor on a replacement show, where Josh is the star and big boss. Working for the enemy doesn’t sit so well with Paige—but she can’t deny the sparks flying between her and the enemy, either!

That Hawaii has no native reptilian species! The story is set on a fictional island, one used exclusively by the entertainment industry for filming shows, reality TV, movies, etc. But I researched all the islands to get a feel for what might be out there, since I’ve never visited Hawaii personally. I learned a lot of interesting things in the process!

I practice Ashtanga yoga, which could be considered either a quirk OR a ritual, depending on how I feel that day. It lays an important foundation in my life, in both a physical and a mental sense—without it, I doubt I could do much.

J.A. Rock (www.jarockauthor.com) is a childhood best friend of mine, and we grew up writing novels and critiquing each other’s work. Without her, I know for a fact I wouldn’t be where I am today. I admire her so much. She inspires me to be a better writer.

For those family members in the know, they are really into it. I’ve personally requested that my father NOT read my romance novels, just because, you know, sex scenes and all that, but he really loves that I am following my passion and supports it. My mother, too—she’s a writer as well, so she gets it!

Ashtanga yoga; cooking; wine tasting; traveling. And travel. And more travel. I am a FREAK for travel! I think it’s why I started the travel-themed short story series…I apparently am not satisfied with real-life world travel, I have to also fiction-travel!

I’m putting the final touches on my first ever New Adult novel, a best friends-turned-lovers story set in my home state of Ohio. Two old friends find each other again after one teaches English abroad and the other stays in the hometown to start his own business (see, can’t keep travel out of ANYTHING!). After that, I think my first romantic suspense novel is on deck. I can’t wait to share these stories with the world!

A New York Minute
Blurb:
Paige Alexander, successful host of A New York Minute, adores her job and will do anything to save the show that’s her brainchild. But when IBC, fronted by Josh Lambert, buys NYCBC, Paige’s show is cancelled, and her choices are unemployment or a non-starring role on a new show co-hosted by Jerk Lambert, a man who makes her hotter than hell in every way.

Having scaled the golden rungs of the corporate ladder, Josh doesn’t do relationships or complicated. Promised a multimillion dollar payday if he turns Wakin’ Up—the show that replaced Paige’s—into a hit, Josh kisses uncomplicated goodbye when she shows up. The woman fascinates and terrifies in equal measure, and he’s suddenly questioning the value of gold versus the value of her.

Forced together in an Hawaiian paradise, the steam just keeps rising—on set, in the sauna, and in the narrowing distance between them.


Excerpt:
A New York Minute:
“I’ve wanted this to happen since the day I met you,” he whispered in her ear, sending shivers up and down her spine.
“So have I,” she admitted, too quickly for her own taste.
He laughed, deep and gravelly. His green eyes sparkled—the mask of his professional façade had completely fallen away. She loved this real Josh above her. He was so boyish yet mature, hard-bodied yet gentle.
“But Paige, I thought you hated me.”
“What makes you think I still don’t?” She placed tiny kisses up and down the sides of his neck. Kissing him removed the veneer of his professional side, allowed her to peer behind the curtain to the soft core inside. A regular guy with power, a west coast boy with dreams. Wiping away the Hollywood lacquer revealed something even more attractive beneath.
“Well, this certainly doesn’t look like you hate me,” he whispered, fingertips trailing down the side of her face, over the dip in her neck, making swirls in the area between her breasts.