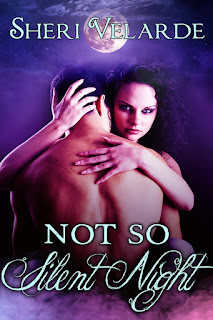 It’s great to be back here on Romance Reviews Today! Since I was recently on and interviewed for Possessed by Love, I thought I would try something a little different this time around. Today I would like to talk about music and writing and how the two are interconnected for me.
Music plays a huge roll in my life and that of course means that music has a major influence on my writing. Now I am a rock and roll gal at heart, so it is no wonder that many of my characters have the rock n roll mentality and toughness. That is certainly the fact for Alexander and Anna from Not So Silent Night. Alexander embodies the self-confidence of a front man. He commands the room whenever he walks in and is certain in his every move and want. The total alpha male that is for sure and worthy of the attitude of Mick Jagger and the likes.
Now Anna is a bit on the darker side. She does not necessarily command the room like Alexander, but she certainly does stand out. Think of her as the Keith Richards of the crowd. Someone you doesn’t necessarily want all the attention that she gets, but someone that others are not able to keep their eyes off of. Personally, when thinking of Anna I think of some of the harder women in rock and metal. Beautiful, but certainly not someone to be messed with since they are fighting hard to belong in a perceived “man’s world”.
I also draw inspiration for myself and pursuing my dreams from fellow creative types like musicians. Music, like writing, takes a lot of hard work, practice and tons of perseverance; but all of it is worth it to be doing something that you absolutely love! Earlier this year I went to see the Foo Fighters, one of my favorite bands, and I was in awe of the joy on Dave Ghrol’s face as he played. Here is a man who has been doing this for over twenty years in the Foo Fighters alone and he still loves his job! That is something that I personally inspire to be like in twenty years from now for me, only as an author because my bass skills just aren’t going to cut it.
Buy Link: http://www.amazon.com/dp/B0187T305M
Author Links:
Website/Blog: http://sherivelarde.weebly.com/
Facebook: https://www.facebook.com/pages/Sheri-VelardeKelly-Ryan/632892500084202
Twitter: https://twitter.com/Sher_V

Blurbs:
Another lonely Christmas approaches for Anna and her life of penance—until an otherworldly distraction appears and changes her life.

Anna is a lonely woman, running her dead grandmother's flower shop. She hates Christmas and could not feel more lost when a handsome and mysterious Russian, Alexander, walks into her shop and her life. Each has secrets that they are harboring. Just as their passion erupts, the good old boys in town threaten to ruin everything. Getting to know each other is tough for most couples, adding in magic does not make it any easier. Now with a pack of werewolves out to destroy them, things become intense. They find themselves in a fight for their lives. Can their newfound love give them the strength to win against this threat and trust in the future?

Excerpt:
She had almost finished cleaning up in back when she heard the bell on the door ring less than five minutes before closing. "Seriously? Can't people let me get out of here on time just one damn night?" she muttered to herself as she stormed toward the front so she could wait on her customer and then get the hell out of the store.

Anna whipped around the corner in a huff, not caring if she scared the latecomer away. She stopped in her tracks and almost forgot what had pissed her off when she saw the customer in question. The most breathtaking back view of a man she had ever seen stood just inside the doorway, and her brain stopped working for the moment. Wow, who knew broad shoulders and a great rear could stop a woman in her tracks? While she gawked like an idiot, the man turned around and proved to be even more distracting from the front. This guy was like a wall of muscle, perfect body attached to a very masculine and handsome face with the deepest blue eyes Anna had ever seen.

"Sorry, I know you are about to close, but I need a gift of flowers," he said when he saw Anna. He had a very thick eastern European accent that she thought might be Russian, which of course only made him hotter. She noticed his eyes taking her in, and she couldn't help but stand a little straighter, showing her curves off to her advantage while she absentmindedly ran her fingers through her long, wavy, raven hair, which most men seemed to love.

It took Anna's brain a few moments to catch up before she could speak. Her previous anger and frustration vanished, replaced by eagerness to help this particular customer. "No problem at all. Do you have an idea of what kind of gift you are looking for? Is this for your girlfriend or wife?" Anna held her breath as she waited for this mystery man to answer, a bit annoyed with herself that she cared so much about what he might say. 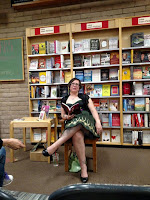 Sheri Velarde, lives in New Mexico with her husband and their two dogs.
Being an avid reader since an early age, she has wanted to be a writer for as long as she can remember. She has been writing all her life, but only recently started to actually try to pursue her dream of writing for a living. She specializes in all things paranormal and that go bump in the night. Her heart truly lies in exploring unknown worlds or adding the supernatural to our world. If it goes bump in the night or has magical connotations, Sheri writes about it.
She is constantly putting out new material with various publishers, so it is best to keep up with her on her website www.sherivelarde.weebly.com.
In her spare time Sheri is an artist, jewelry designer, independent comic writer/artist and freelance non-fiction writer. Hiking in the mountains, going to live concerts, art openings, museums, and hosting intimate dinner parties.