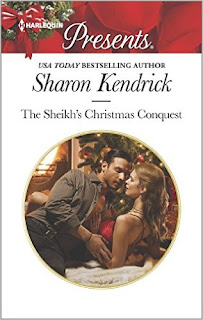 Sheikh Saladin Al Mektala needs Olivia Miller. Rather, he needs her services as a “horse whisperer” to cure his prized mare. Livvy so far has rebuffed his phone and email requests to come to Jazratian to perform her “magic” and he decides to go to her in the remote English countryside…just as a snowstorm hits the area and knocks out the power at the bed and breakfast that she owns. With no other guests—and Saladin there without bodyguards—they’re all alone. Livvy is stubborn, but Saladin knows that soon he’ll have her on a plane to his country—and also in his bed.

After embarrassingly being jilted on the altar years ago, Livvy retired from her job providing special services for horses and retreated to the family home, which she turned into a bed and breakfast. She has no plans to come out of retirement, yet Saladin is persistent in pursuing her and isn’t afraid of using seduction as his weapon of attack.  His plan works, and while he made love to her while they were stranded, once they’re in his country, he cannot touch her without fearing scandal. It’s not like he plans to marry, since his heart still belongs to his late wife…

Saladin is used to people caving in to whatever he wants as he is the ruler and no one says no to him. But Livvy has turned him down repeatedly when he “asked” to hire her to help cure his mare. Years ago she was the famed horse whisperer, but after the scandal where she was jilted on the altar and her fiancé left her for her best friend, she has buried herself in a remote part of England. As Christmas approaches, she expected a full house with holiday vacationers, but with the arrival of Saladin and the snowstorm, everyone cancels, leaving them alone. Saladin uses their isolation to his advantage, making Livvy crave his kisses…and more. But he has an ulterior motive in using sex to be his bargaining chip. It succeeds all too well, but it isn’t until they’re in the air flying to Jazratian that Livvy learns he won’t touch her again for fear of causing a scandal. Yet as much as he tries to keep away from her, his body craves her even more.

Livvy and Saladin are foes in a battle…he wants her for a job and she wants to be left alone in THE SHEIKH’S CHRISTMAS CONQUEST. But the bigger battle between them is the sizzling attraction that heats up the more they’re alone, and really heats up when he tries to keep away from her. Saladin’s late wife died tragically and he blames himself, and as such he has hardened his heart from future involvement with any woman. If he changes his mind about remarriage, it certainly wouldn’t be with a woman from a foreign country. Yet, Livvy’s beauty and innocence snares him. Like a man dying of thirst, she is his oasis.

Find the author's books at Amazon