Virgo's Vice is book #3 in my Zodiac Series, romantic suspense in which each primary female character belongs to a different star sign and exhibits the traits associated with her sign.

I like to raise awareness of some sort of social problem with every book I write. In this one, videographer Lexie King was repeatedly molested by her aunt's boyfriend as a child, and as a result she is now addicted to anxiety drugs. She knows she has a problem, and signs up to work on a new reality show set in Africa. She leaves her medications behind in an attempt to kick her addiction and better herself. Imagine her despair when she discovers the man who molested her is one of the contestants.

This book is set in Africa, which is where I was born and raised, and they say Africa gets into your blood and you can never truly leave it.

My mother wrote short stories and I somehow always knew I would follow in her footsteps.

These days, writers don't barricade themselves into a remote cabin in the mountains and create their masterpiece as they used to do. Most writers are ordinary people who have jobs-like me-and write whenever they get the opportunity.

5. What genre do you write?

I write romantic suspense, which is romance woven into a suspense story. When you think of many of the most famous and classic stories, more often than not, a man and a woman fall in love, even if it was not written with romance as the primary focus. Love truly is what makes the world go around.  I attribute the suspense part of my writing to growing up in Africa and living life on the edge. Among other things, there was a time when I had to carry an UZI in case of ambush by terrorists, who raped, tortured and murdered the innocent.

6. Can you tell us about what's coming up next for you writing wise?

My next novel, Scorpio's Sting is complete, but still in the self-editing phase. It's a hard-hitting story about the human and drug smuggling that takes place over our borders every day, and the vicious and dangerous drug lords who are responsible. 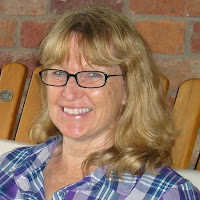 Trish Jackson grew up on a farm in Zimbabwe, Africa, where it was not unusual to have to carry an UZI around for protection from armed gangs of insurgents. This sparked a love of adventure and suspense, and being a romantic at heart, she writes romantic suspense. She moved to the U.S. in 1990, loves country living, horse riding, chocolate and all animals.

Trish's passion is helping the innocents of the world - children, the elderly, the mentally challenged, and animals. They always feature in her writing. Her stories are set in small towns, where the people enjoy country values, and the pace of life is a little slower.

WAY OUT OF LINE, a poignant romantic suspense about everlasting love is the first of her books set in Africa. She is compelled to write others about the land of her birth because once you have lived in Africa, you can never get it out of you.

Her REDNECK SERIES are romantic suspense/comedies about Twila Taunton, who is proud to be a redneck. Sassy and evocative, her adventures as a private investigator assisted by Harley-riding Great Aunt Essie and canine Scratch, while juggling her love life between two hunks.

CAPRICORN CRAVINGS Book #1 Zodiac Series, where each heroine will belong to a different star sign. Capricorn Riley Shaughnessy knows she's falling for hunky Powell Stewart even though he could be a serial killer.

AQUARIUS ADDICTION Book #2 Zodiac Series. Arlettea Xylander, a diminutive FBI psychic finds the man of her dreams on the same day she is diagnosed with a deadly disease. She puts doing him in first position on her bucket list, but can the mysterious Voodoo Queen or the ancient spell book be the key to finding a cure?

VIRGO'S VICE Book #3 Zodiac Series is coming in October, 2015. When Lexie King has signed up to be a camera operator in Allan Dockery's new survival reality show in Africa she had no idea the monster from her childhood would be there. Can hunky cowboy, Billy Murphy save her from him?
at November 08, 2015

I thoroughly enjoyed reading this interview of a very talented author. I have read Trish Jackson's work and she never fails to entertain and intrigue the reader. Trish, keep those books coming. Your audience can never get enough!

I've read some of Trish Jackson's work and enjoyed it immensely. Thanks for sharing this interview. I was particularly struck by her Euro-African background and by her interest in social issues.