Promo Spotlight on ONCE TOUCHED by Lauar Moore with a contest to win a copy!

The youngest of the three Knowles siblings, Quinn has in her blood the love of the land and its beautiful creatures. Raising enough money to build an animal sanctuary is a dream Quinn lives every day—while fending off her family’s well-intentioned matchmaking schemes. Though harboring secret fears about intimacy, Quinn soon realizes she cannot fight her growing attraction to a man who has suddenly entered her life.

Scarred by his months in Afghanistan and the violence he witnessed there through his camera lens, photojournalist Ethan Saunders throws himself into hard ranching work as a prescription for healing. But falling for Quinn has given him the one thing he thought he’d lost forever: hope. Ethan discovers that Quinn, like the innocent animals she rescues, is shy, and afraid of entrusting her heart to a man. Passion soon awakens Ethan’s strength, and his tender seduction may be just what Quinn needs to believe in herself—and in his love. 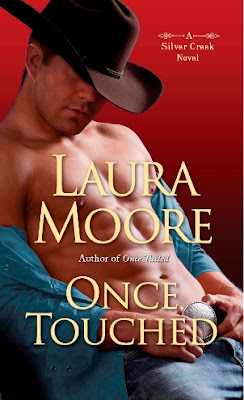 Excerpt from Once Touched:

These days, when Quinn Knowles needed a pair of ears to listen to her, she sought out long, furry ones in a soft dove gray that stuck out like handlebars on a bike.
People were all right to talk to now and again. But her friends and family were unsuitable at present, for the simple reason that they were part of her problem.
“Okay, so it might not be exactly fair to call love a ‘problem.’” Perched on the goat pen’s top railing, she leaned forward to scratch Hennie’s furry chin. “But it’s all a bit much. I can’t take two steps without tripping over some blissed-out pair.”
Maybelle gave a bleat that sounded suspiciously like a laugh.
“I’m not exaggerating,” Quinn said. “The situation is seriously annoying.”
In response, the doe stuck her nose in the feeder and withdrew a mouthful of timothy hay. Maybelle had a weakness for timothy.
“I’m willing to give the guests a pass. After all, that’s what they’re here for.” Located on three thousand bucolic acres in Northern California, the setting encouraged relaxation. The amenities and services that her family and Silver Creek’s staff provided were designed to pamper the senses. The ranch’s restaurant offered delicious food, locally sourced. The cabins, stocked with luxury comforts—cloud-soft beds, combed-cotton bed linens, and bathtubs large enough to accommodate two with lots of wiggle room—created a sensual nest where guests could indulge and, in the true spirit of Marvin Gaye, get it on.
Wilhelmina stepped forward to nibble on Quinn’s knee. Because she had a staff meeting to attend later, Quinn moved her leg a tad to the left, avoiding a smear of masticated hay and spit on the front of her jeans, and returned to the topic du jour.
“It’d be one thing if all this love and romance were confined to strangers passing through. But thanks to my family, the love vibe’s closing in. And I’m the last one standing.”
Both her brothers had fallen, and fallen hard. Ward, her oldest brother, was engaged to be married. Tess’s and his wedding was scheduled for January, a mere three months away. Quinn preferred not to think about how fast the date was approaching. She’d attended enough weddings to be able to say with certainty that she was allergic to them.
Reid, her other brother—better and wiser than she was by four years, as he liked to claim—had also succumbed. He and Mia Bodell, their neighbor and one of Quinn’s best friends, had announced their engagement last night at the Sunday family dinner. Mia had looked beautiful, radiant with happiness, and Reid couldn’t stop grinning. Quinn’s mother—equestrian by vocation, hotelier by profession, and matchmaker by some weird and deeply twisted impulse—had wept tears of joy and satisfaction. Her two sons were destined for happily-ever-afters with terrific women.
Of course Quinn was happy for the four of them. But that didn’t mean she wanted to join the party. And it was getting old, her running into the lovers with their lips locked and their hands clutching and stroking. Their besotted cooing was driving her up the wall. She’d rather listen to her foster parrot Alfie’s loudest shrieks any day.
Even her parents, who should be immune after thirty-plus years of marriage, were afflicted—infected—and were behaving like newlyweds.
Whatever was going around her family, Quinn intended to remain immune. The whole point of being a twenty-four-year-old woman in the twenty-first century was that she could be single and totally absorbed in her own thing. Call her selfish, but she had neither the time nor the inclination to deal with guys and their wants and expectations.
And she’d rather be set upon by fire ants than be needy herself.
Albertina ambled over to Gertrude and began mouthing her neck in some communal morning grooming. Gertrude’s ears twitched in bliss.
“Don’t get me wrong, girls. It’s not that I have anything against love. It’s just not for me. I can’t have a man hanging around and slowing me down when I have so much to accomplish. Mom should understand that.”
But Quinn had the sneaking suspicion her mother was at it again—the compulsive matchmaking business. Couldn’t the woman leave well enough alone? It was embarrassing. Uncomfortable, too.
There was only one thing to do: figure out how to outwit a mother who was as wily as mothers came.
“You know my mom,” she continued. “She’s the one who brings you pine branches to chew. Nice lady, right? You’d think she’d be satisfied having two of her offspring happily matched and ready to say ‘I do’ before the minister. But no. She has to go and hire J—”
“You often talk to your goats, Quinn?” Josh Yates asked.
Speak of the chaps-wearing devil.

Yodamom said…
Quinn's story should be so good. She is a feisty independent woman (my favorite) and Josh sounds like just the right guy to give a girl goosebumps. I can't wait
6:09 AM

Unknown said…
I can't wait to read this!!! I've read everything from this author so far and can't wait to get this. Thanks for the chance. schultheis319@AOL.COM
6:19 AM

Unknown said…
I will read this book over the holidays. I have long awaited Quinn's story.
Thanks for the chance, Kay
6:23 AM

Laurie G said…
I'm looking forward to visiting the Silver Creek Ranch and reading Quinn's brothers, Reid and Ward's, earlier stories too. You are a new author for me. I like that you have chosen an emotionally wounded warrior to open Quinn's heart to love. Her compassion will also help him heal.
6:29 AM

Laney4 said…
Liked Once Tasted's HEA. Look forward to Once Touched's HEA too!
7:05 AM

Kathy Campbell said…
Can't wait to read it. I love this series.
7:38 AM

Kathy Campbell said…
Can't wait to read it. I love this series.
7:38 AM

Ann: Romancing the Readers said…
I can't wait to read it. It seems like forever since I read the last one. Very enjoyable series! Thanks for the chance to win!
11:23 AM

Unknown said…
I have read all books written by Laura. Awesome author. Every book has been fabulous.
2:55 PM

Unknown said…
I have read all books written by Laura. Awesome author. Every book has been fabulous.
2:56 PM

Martha Lawson said…
Love her books and can't wait for this one!!!