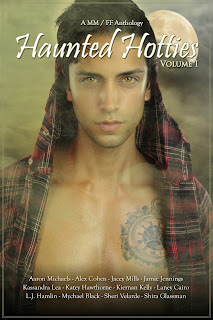 Possessed by Love is a short story that is part of the Haunted Hotties anthology out on Torquere Press. My contribution is a sweet ghost story about how a huge storm and some frisky ghosts bring two lonely men together to ignite their passion.

Well this turned into a m/m piece all on its own. I usually write m/f and had previously written a f/f short, so it was a bit of a surprise to write a m/m story and I was thrilled it came out good and got published! New genres are always a little scary.

Well I am a pantser, meaning I never plot out my books. I get a vague idea and then flesh it out a bit and just start writing. I let the characters take me where they want to go. Also, I rarely write at a desk. I am usually on the couch, at the kitchen table, in bed, anywhere but a desk.

Authors like Stephen King and J.K. Rowling were huge influences. On a more personal level, it was my friend Kelly who got me published. I had been writing forever, but never showed anyone my work. She found out I had some paranormal romance stories and asked me to read them. She did and loved them. She is a brilliant woman and reads the genre a lot, so I used her encouragement to make my first submission and I got published! The rest is history I suppose.

My husband is a huge supporter of my writing. He is the one who encouraged me to take the leap to full time writing last year and continues to encourage me each and every day. He seems pretty darn proud of me.

I make my own independent comics as a hobby. I also paint and make jewelry. I really want to take up dance, yes even in my late 30s I want to take dance classes, for fitness and to help with some balance issues.

I have a couple stories out right now for anthologies and I am currently working on two novels, a sequel to my romantic fantasy Quest for Redemption and a time-travel/steampunk epic. My husband and I are also thinking of starting our own publishing company next year, so that is exciting!

Possessed by Love
By
Sheri Velarde 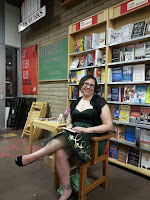 Sheri Velarde, lives in New Mexico with her fiancé and their two dogs.
Being an avid reader since an early age, she has wanted to be a writer for as long as she can remember. She has been writing all her life, but only recently started to actually try to pursue her dream of writing for a living. She specializes in all things paranormal and that go bump in the night. Her heart truly lies in exploring unknown worlds or adding the supernatural to our world. If it goes bump in the night or has magical connotations, Sheri writes about it.
She is constantly putting out new material with various publishers, so it is best to keep up with her on her website www.sherivelarde.weebly.com.
In her spare time Sheri is an artist, jewelry designer, independent comic writer/artist and freelance non-fiction writer. Hiking in the mountains, going to live concerts, art openings, museums, and hosting intimate dinner parties.

Blurb
Andrew faced the growing storm with animosity. He would be trapped in his shop for a couple of days with no food or electricity. Hopefully he could at least get food at the Church Street Café. Food he did find and so much more once Damian, the owner of the café, asks him to ride out the storm with him in the quarters above the restaurant. Generators, food and warmth aside, Andrew has spent months wishing for such an invitation from the mysterious and sexy Damian. What starts out as light flirtation turns into so much more. Something comes over both men, letting them leave their insecurities behind as they become possessed by passion and love.
Buy links:
http://amzn.com/B016MU9688
http://amzn.com/B016LVX0HG
http://www.torquerebooks.com/index.php?main_page=product_info&cPath=200&products_id=4510
https://www.allromanceebooks.com/storeSearch.html
Book excerpt
The door opened and a rush of warm air enveloped and light him. Andrew sighed in relief, stepping inside. Looking around and seeing no one, he called out, "Hello. Are you open?" His voice echoed slightly in the strange quiet that had befallen the entire city, especially the usually busy tourist section where he worked and practically lived, trying to make his designs successful. Venturing farther into the restaurant, heading towards the kitchen in back, he figured it would always be possible to take some food and leave money. As he pushed the kitchen door open, he called out again, "Is anyone here?" It was strange that the lights were on and the place was so warm when the rest of the square was dark and cold, it left him feeling a bit uneasy.
Suddenly something moved behind him. Andrew turned quickly but no one was there. The entire dining area was open and he didn't see a soul, yet he was sure he had felt someone right behind him only a moment before. A chill ran down his spine, even though the room was warm from several fires burning. A little scared, he warily continued into the kitchen.
"Hello?" Still no answer, so he proceeded to look for food. Upon finding some takeout supplies, Andrew began to fill them with posole and chili, figuring he could warm them on the wood stove back in his store in some old pot or something should he be stuck longer than expected. “Always be prepared.” He mumbled to himself, chuckling as he remembered his brief stint and disastrous stint in the boy scouts where he learned that motto.
Just as he was packing up to leave, wondering why all the food was there and still warm without a person in sight, he heard a deep, sexy, masculine voice behind him. "Can I help you with something, Andrew?"
Andrew shrieked like a boy as he turned around. "Damian, you nearly scared me to death. I called out over and over with no answer." Andrew’s heart rate kicked up a notch, as it always did when he was in the presence of the new café owner. The man was so damn good-looking; he always reminded him of Benjamin Bratt: tall, dark, and handsome, but with a Spanish accent. He was just too hot for him to handle, and he usually stammered inanely, making a fool of himself in the other man’s presence.