Promo Spotlight: BREAK ME DOWN by Roni Loren 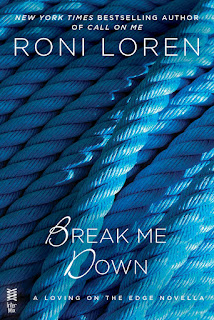 Samantha Dunbar needs to forget Gibson Andrews. When he trained her to be a domme, she experienced just how hot things could get with the sexy executive. She was ready to hand him everything—including her heart. But Gibson backed away, declaring them incompatible. He’s a dominant, and Sam’s no submissive.

But after an attack shakes Sam to her core, Gibson tracks her down at her family’s rundown farmhouse and makes her an offer. He’ll stay the week and be hers in every way—a helping hand for the renovation and a willing lover in her bed. He swore he’d never give up control to anyone again, but he hasn’t been able to touch another woman since Sam. Maybe a week alone with her will cure him of his relentless craving.

But one taste only makes them want more, and Sam and Gibson are drawn in deeper than ever. The man who won’t give in has just met the girl who won’t give up… 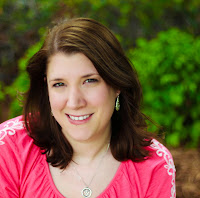 He banged on it again before she could reach it, so when she swung the door open, his fist was still hovering in the air. He blinked as if surprised she’d actually appeared, and then blatant relief descended over his features. “Thank Christ.”

Her jaw clenched, and she had to force it to relax to speak. “What the hell are you doing here?”

His gaze skated over her, a deep line appearing between his brows as he ignored her question. “Shit, Sam, you look . . . baby.”

She had a good idea what she looked like. She was sweaty, covered with wood dust, and between the attack last night and all the crying, her face probably looked like she’d been hit with a wet bag of rocks. Goddammit. This was the last thing she needed Gibson to see. And the fact that he’d forced her into letting him see her like this pissed her off even more. “Don’t you dare call me baby or look at me like that. You’re not supposed to be here. I didn’t invite you.”

His blue eyes flicked upward, rigid determination there. “You don’t need to be alone right now. And you damn well shouldn’t be alone out here in the middle of nowhere.” He swung a hand toward the door. “A stiff wind would knock this thing down. What are you thinking?”

Well, that just punched all her bitch buttons. “Thanks for stopping by. It’s been fun. I’m alive and fine. You can go home now. Buh-bye.”

She moved to shut the door, but his hand flew out to block it from closing. “Oh, no you don’t. You can be pissed at me all you want. But if you think I’m leaving you out here like this, let me alleviate you of that notion. Not gonna happen, sunshine.”

Her grip on the door tightened. “What? You gonna drag me out kicking and screaming, Gib? I’ll fucking fight you.”

A muscle in his jaw ticked and he took a step forward. “You know I’m not going to put my hands on you like that. But you either come willingly or you’re going to be staring at my ugly mug until you do.”

Ugly mug was about as far from the truth as possible. Even with dark shadows under his eyes, his hair disheveled from raking fingers, and a wrinkled shirt, he looked like he’d just fallen off the stage of some hot man revue. But she was too ticked off to care about how hot he was. Mostly.

“Not unless you come with me.” He ducked under the arm she had braced on the door and strode inside.

“Oh my God.” She spun around, the door swinging shut on its own behind her. “Boundaries, dude. Ever heard of the word?”

“Yep. Can spell it and everything.” Gib crossed his arms over his chest and peered around, examining the place. His gaze landed on the sander and the stripped floor of the adjoining dining room. “Is this what you’ve been up to?”

She groaned. He wasn’t going to go away. That much was clear. And she wasn’t going with him. He really would have to fight her for that. She’d waited too long to take this week off. And she wanted that week spent here. If she could knock out the list of projects she had, she’d be that much closer to having this place livable. “I’m renovating. Despite what ideas you have in that tetosteroned brain of yours, I didn’t run out here because I’m freaking out over what happened last night. I had a vacation planned. I’m going to spend the week here—alone. I just left a few hours early. And I’m fine. I come out here all the time. I have a gun. I have Darcy. No serial killers have bothered me yet.”

“Yet. There’s a key word for ya. Friday the 13th Part Thirty-Five could be set here.”

“Look, I get that you don’t want me here. But you’re not going to convince me everything’s peachy. Your argument would hold more water if it weren’t obvious that you’ve been crying, that you haven’t slept, and that you were completely freaked out when you bolted at the Ranch.”

She gritted her teeth, hoping her steely gaze would make him back the hell off. “I’m. Fine.”

But instead of backing off, he stepped closer, his eyes softening and his hands cupping her shoulders. “I don’t think you are. And that’s cool. Feel whatever you need to feel. You don’t have to hide that from me or be embarrassed. But I need you to forget for a second that you’re mad at me. Forget all that shit at the Ranch. And remember that before anything else, I’m your friend, Sam. And if this were my brother or Pike or Foster acting like a hardheaded, reckless jackass, I would call them out, too. Would you let Tessa do this? Stay out here alone when she’d just been through something fucking traumatic?”

His palms on her shoulders were almost too much. She’d die if he could feel her trembling. But the touch was somehow grounding, too—settling. And she hated to admit he was right. She’d never let Tessa do this. She could come up with ten arguments for why it was a dumb idea. But she couldn’t leave. If she left, her attackers won. They would successfully steal her vacation, change her plans, alter her life. She met Gibson’s gaze, needing him to understand, needing him to hear her. She put her hands over his. “I can’t go, Gib. I won’t. I get what you’re saying, but . . . I need this. Maybe more than anything. I need to be here.”