Promo Spotlight on SATIN AND STEEL by Brantwijn Serrah 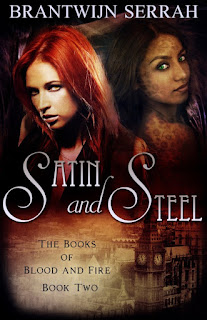 1.  Tell us about your newest release.
Satin and Steel is the second book in my Blood and Fire series, the sequel to Lotus Petals. It continues the story of Rhiannon Donovan roughly half a century after the events of Lotus Petals and explores the world of a vampire lost in grief. But Rhiannon’s also a member of the Blood Circle, the Five Demon Nations, and the creatures around her aren’t going to allow her the luxury of human emotion. This book is about Rhiannon’s development as a demon and her choice between good and evil. There’s a new love interest with a very wicked plan in mind...but fans of Lotus Petals will be happy to know things in Japan have not stayed buried.
2.  What was one of the most surprising things you learned in creating your story?
Satin and Steel brings with it the first appearance of the Blood and Fire werewolves, so I did some background research about wolves in Europe at the time. I’ve enjoyed the idea that werewolves in certain regions would reflect the particular species of real wolves in the same region. It turns out that wolves in Britain were hunted to extinction centuries before. I touch on this in the book briefly.

3.  Do you have any interesting or quirks or rituals?
Lately I’ll find a YouTube video with and hour or two of instrumental music (nothing with words), pop on my headphones, and just write. I’ve saved hour-long videos of Celtic music, “Epic” music, “Spooky” music. Whatever is appropriate for what I’m currently writing, I’ll pop a similar video on and just go with it.  It’s not really the same as using music as inspiration...I don’t really incorporate anything from the music into the work. It’s more like just white noise, blocking out distraction and centering my brain in the tone of the work.

4.  What authors or friends influenced you in helping you become a writer?
I've always been a writer at heart.  I have to give deep thanks, though, to my husband Ken and my best friend Rissa, who have always pulled for me to get published. They have been my biggest supporters from day one, and that is why Lotus Petals is dedicated to them.

As for authors, I have to say that Jim Butcher, who writes The Dresden Files, is a huge influence and inspiration to me. I would say that even if all I knew of him was what I'd read through his books—they are terrific—but I actually had the pleasure of meeting him, and he just blew me away by being exceptionally open, friendly, and willing to talk shop. I thanked him for his books and told him what an inspiration to me they were, and he was very encouraging that I keep submitting my work, that it would be a success if I kept trying. So that was pretty amazing!

5.  What does your family think about your career as a published author?
My mom is incredibly excited but disappointed that she can't brag about me at church.  She keeps asking for copies of my books not so she can read them but at least so she can put them on her bookshelf and be proud of me. I keep telling her she probably really doesn't... since they have titles like The Big Book of Orgasm and whatnot...

Genre: Paranormal Erotic Romance (NC17)
Book blurb
They say love ruined her. It's time to prove them wrong.
Half a century ago, Rhiannon lost the woman she loved. Since then, unlife has held little meaning for her, and she's fallen from grace among the vampire nation. She once swore to throw herself into the sun the day Aijyn died...but it turns out she's no good at keeping promises.
Sometimes the best cure for heartache is surrender. There's a demon in London with new promises: darkness to run in, pleasures to hunt, rules to break. Sent to track down a dangerous traitor, Rhiannon is caught up in a game of murder and treachery between three warring races...and the sinful, seductive shadow-walker who could be her redemption, or her ultimate undoing.

Author bio
When she isn't visiting the worlds of immortals, demons, dragons and goblins, Brantwijn fills her time with artistic endeavors: sketching, painting, customizing My Little Ponies and sewing plushies for friends. She can't handle coffee unless there's enough cream and sugar to make it a milkshake, but try and sweeten her tea and she will never forgive you. She moonlights as a futon for four lazy cats, loves tabletop role-play games, and can spend hours watching Futurama, American Horror Story or Buffy the Vampire Slayer while she writes or draws.
In addition to her novels, Brantwijn has self-published erotic short stories available on Smashwords or Amazon.  She's also had a short story published in the Cleiss Press Big Book of Orgasm and the anthology Coming Together Through The Storm. She hopes to have several more tales to tell as time goes on.  She has author pages on GoodReads and Amazon, and loves to see reader comments on her work. Her short stories occasionally pop up at Foreplay and Fangs, her blog at http://brantwijn.blogspot.com.
Social links
Brantwijn's Facebook Page: http://tinyurl.com/qf2bzwk
Foreplay and Fangs blog: http://brantwijn.blogspot.com/?zx=6ba3380c7201b326
Foreplay and Fangs on Facebook: http://tinyurl.com/q2cmnep
Find Brantwijn on Google+
And on Goodreads
Say hi to her on Twitter

Book excerpt
In a blink, the demon disappeared into the silhouette of the smoke stack. Then, Rhiannon felt slender fingers brushing along her shoulder, slow and coy. She spun to find Vivienne lounging happily on her stomach atop another chimney, slipped there through the shadows without a sound.
“What we have heard about you,” she said, “is far from rumor.”
Rhiannon jerked away. “Don’t touch me.”
The corner of Vivienne’s smile twitched, for a moment becoming hard, an irritated scowl.
“Your kind is only the Fourth Blood of the Drogh Lord’s kingdom,” she hissed. “The werewolves and shadiil came long before vampires. We are older than even the oldest of your race, gravespawn, something you and your mother would do well to keep in mind.”
Rhiannon bristled at the insult. “Older than vampires, but still the spawn of beasts,” she spat. “Rife with a touch of madness because of it, I’d say.”
Vivienne fell silent, searching Rhiannon carefully. “They say you have been mad once.”
Rhiannon’s spine straightened. A wary prickle traveled through her shoulders and a low growl started deep in her throat.
“Drank the blood of another vampire, didn’t you?” the shadiil purred. “Drained a rival warrior to death, just as a rabid thrall does, and lost your pretty little mind.”
Rhiannon’s hand returned to the hilt of her blade.
“You haven’t exactly been the same since then, have you, Rhiannon Donovan?”
“It’s a lie,” she muttered. “I am not a thrall. I know my own mind and I am not rabid!”
Vivienne’s smirk returned, as if renewed by the anger she’d provoked. She slid her knees out from under her and dropped to the rooftop, backing Rhiannon down.
“You were expected to become the first Archon in the history of the Blood Circle Council to bear four fangs,” she said. “A vampire colder and crueler than any ever squirted out from between her dam’s thighs. Colder and crueler than most who were sired with a bite, perhaps. What happened to you, Rhiannon Donovan? Where did your strict, disciplined focus and cold-blooded dedication go? Where is the tigre méchant et sanguinaire, the malicious and bloodthirsty tiger?”
“Back away, shadiil,” the vampire spat. “I am still a Weapons master.”
Vivienne stopped, tilting her head, scanning Rhiannon up and down with giddy cruelty.
“They were wrong about you,” she said. “You are no Archon.”
“It no longer matters to me if I am.”
Green eyes glittered. “My race knows better, little Rhiannon. My queen knows better. You will throw off every expectation the bloodsuckers have of you. You will throw off every expectation everyone has of you. You are no Archon at heart.”
She stood close enough that her pretty, elfin nose almost touched Rhiannon’s. The vampire realized she’d stopped growling, caught off guard by those glowing, hypnotic eyes.
“Non, non, Rhiannon. At heart, you are nothing less than a Councilwoman herself.”
Rhiannon snorted.
“You are the one who is mad, shadiil,” she muttered, turning to slip down the way she had come. “Run off. Let me hunt in peace.”
“I am not teasing you, ma chérie,” Vivienne said with a smile. “This is what the seers have told us: you will become the greatest vampire among all vampires.”
“Your seers are blind.”
With a cold rush of shadows, the other demon appeared out of the darkness before her, materialized in the silhouette of the window casement.
“Enough of grand talk then, since it bothers you so,” she murmured. “Reconsider hunting with me. We will find this beast and put it in the ground. You can go back to your race a hero and get back on the path you pursued so hungrily before you lost your mind.”
“I didn’t lose my mind!” Rhiannon insisted, pushing past her.
“The shadiil prides of London and our werewolf allies will be far more helpful to you than your own kind. We are not so busy prattling about the blame and covering up our blunders. You will find us to be far more pleasant company.”
“I don’t want company.”
“Arrêtez, ma cher...wait.”
Rhiannon paused, another growl escaping her.
Vivienne strolled up to her side. “May I see your teeth, ma beau chérie?”
Rhiannon sneered. “What?”
Vivienne lunged, putting her soft hands to Rhiannon’s face and nudging her lips away from her teeth. As the curious beast inspected the bracketed fangs in eyeteeth and canines, her smile quirked up at the corners even more. She started to purr, her tongue peeking out to run over her dark lips.
“Oh...they are most lovely, bastard child,” she murmured, stroking one hand along Rhiannon’s cheek. “So lovely, I could almost bite you myself, and send you home to your mother with my naughty teeth marks all over your tight little body.” 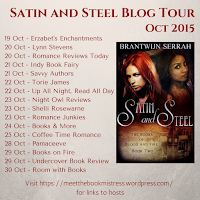 Thank you kindly for hosting us today!