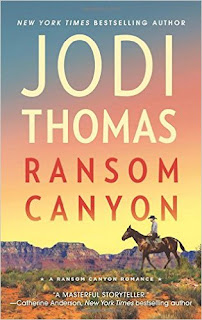 Staten Kirkland, the last of the founding families of Ransom Canyon, runs his big ranch with a practical and steady hand. But all the while the memories of his wife and son haunt his dreams. No one knows the pain he endures or the loneliness he feels except for Quinn O’Grady, Staten’s late wife’s best friend. The three of them grew up together, and Staten’s first thought the night his son died was to run to Quinn. Five years later, the two maintain their secretive relationship, but make no commitments to one another, or have expectations either. Quinn is known in the community as a private person, and she likes it that way. She maintains her farm and hides her own past from everyone.

Growing up in a big family on the ranch neighboring the Kirklands’, Lucas Reyes has big plans for his future. When he finishes high school, Lucas is going to college, and every penny he makes working for Staten Kirkland is going into savings. One night, he accompanies the high school football star, the local sheriff’s daughter, and another friend in an escapade that will affect all four of them.

Recently released from prison, Yancy Grey is looking to make a fresh start, although his plans are hardly law abiding. Setting up temporary lodging in a local elderly housing community, Yancy is surprised at the events that have him wondering what he’s doing with himself.

RANSOM CANYON is a new series introducing readers to a close-knit society that takes care of its own, but can also open its arms to strangers. Sometimes, however, those strangers have plans that can harm citizens and change the future of others.

In true Jodi Thomas fashion, readers will be drawn into this tale, feeling empathy for the beautifully written characters, and enjoying the everyday life in a small town. Fans will love this new setting and meeting the people who, I’m sure, will inhabit future Ransom Canyon novels.