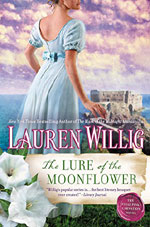 England and Portugal, 2005 and the Regency Era

It's almost Eloise Kelly's wedding day. After giving up on finishing her dissertation, “Aristocratic Espionage during the Wars with France: 1789-1815”, Eloise has moved to England from Boston to marry the man of her dreams, Colin Selwick. She met him while researching his family history, and after Colin's visit to Boston, he's convinced Eloise to turn her dissertation into a novel. And to marry him. But just before the ceremony can take place, they receive a mysterious message and a threat to harm Colin's great-aunt. Nothing ever goes smoothly for Eloise!

The Pink Carnation is in Portugal to find and rescue mad Queen Maria, whose royal family has fled the country as Napoleon's troops march into Lisbon. Evidently they either left her behind or she refused to leave, but the British think she has been taken by loyalists who plan to use her in their resistance movement. Jane Wooliston, the Pink Carnation, is alone on this mission, well almost alone. She has recruited the agent known as the Moonflower, Jack Reid. He is far from pleased to discover that the infamous Pink Carnation is a woman. And sparks begin to fly almost immediately between the two.

Jane is well aware of Jack's history. He hasn't always been the most loyal employee. Her self-confidence is put to the test since she needs Jack for his ability to speak Portuguese, and he makes no bones about the fact that he resents taking orders from her, even if she is the Pink Carnation! Jane also has a few secrets she keeps from Jack that will most likely infuriate him.
THE LURE OF THE MOONFLOWER is, indeed, the last Pink Carnation novel. I savored every word and loved each page. The humor and the brilliance of these conjoined tales have entertained me for years, beginning with THE SECRET HISTORY OF THE PINK CARNATION. Each tale has impeccable research and wonderful characters. Readers will be thoroughly satisfied with the concluding novel. Do enjoy Eloise and Colin's very entertaining wedding ceremony, and discover what Jane does in “retirement”. But do read the entire series because you are selling yourself short of fun reads if you don't.