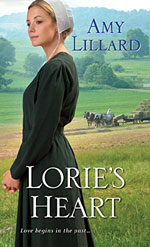 The day Laurie Kaufman and her stepmother Maddie look upon her father's lifeless body in the morgue is the worst day of Lorie's life.  The authorities told her he died in a car accident!  Henry Kaufman is Amish, how could he die behind the wheel of a car?  The police leave them with a box that hold her father's possessions, and right now Lorie has more questions than answers.  Her father sported a tiny tattoo on his chest; she saw it in the morgue, and it's yet another puzzle to be solved.  Her stepmother is no help.  Maddie won't speak about it.  She sends Lorie to the storeroom above the family restaurant to put the box away. Lorie is not to ask questions, not to open the box, but just obey and lock it away from sight.  And, as if this weren't enough, her father owns a car!  How can that be?

Lorie is no stranger to the storeroom above the restaurant.  She hides there to paint.  Painting is something the Amish frown on; it's against their set of rules called the Ordnung.  Painting is all about pride, something the Amish hold no quarter with.  Yes, Lorie has secrets, and apparently, so did her father.  She learns his real name is Henry Mathis, and he has an address in Tulsa.  In for a penny, in for a pound, Lorie asks for help and finds someone to drive her to Tulsa, where she learns she has an Englisch grandmother!  Confusing?  Yes.  With each secret Lorie uncovers about her father's life, several more pop up like the proverbial Pandora's box.  How can she learn the truth without walking outside the Ordnung?

Zach Calhoun works at the assisted living center where Betty Mathis, Lorie's paternal grandmother lives.  Zach first meets Lorie at the quilt auction in Wells Landing when he buys food from the restaurant booth.  Zach is intrigued by Lorie; she's so pretty, even covered by her Amish clothes and kapp.  Now, suddenly, she's here in Tulsa to learn about her grandmother.  Will Zach be able to see her and perhaps become her friend?

LORIE'S HEART nearly breaks as she searches for answers to her father's many secrets.  Luke Lambright, who left the Amish life to drive race cars, has been driving her to Tulsa, and she's lied to Maddie so she can sneak away into the Englisch world where her grandmother lives.  But Betty Mathis has Alzheimer's disease, so the information Lorie learns is cloudy at best.  Totally caught between the Amish and the English world, Lorie is determined to have all the answers to her questions.  How can she decide about her future until she knows the truth of her past?  Treading a thin line of danger, Lorie must learn the truth as best she can, all the while trying to stay within the strict code of the Amish Ordnung.

Dynamic characters from the previous books help Lorie along. Her friends Emily Riel and Caroline Fitch keep her secrets as she tries to jump between the Amish and the English worlds, all the while lying to her stepmother about her activities.  Lorie is also falling in love with Zach, something totally forbidden.  Their worlds can never mesh; their lives are just too far apart.  What can she do?

LORIE'S HEART is the third book in the Wells Landing series, following CAROLINE'S SECRET (August 2014) and COURTING EMILY (January 2015).  LORIE'S HEART is a wonderful addition to this collection.  All of these wonderful novels stand alone, but reading the entire series will make your experience so much richer!  And, in April 2016, author Amy Lillard brings us the next book in the series, JUST PLAIN SADIE.

I can sum up this story in one word:  WOW!

LORIE'S HEART is a fabulous book, a real Perfect 10 story of one woman's life that is challenged beyond belief; her adversity and her perseverance in finding the truth and making her life's choices is extraordinary.