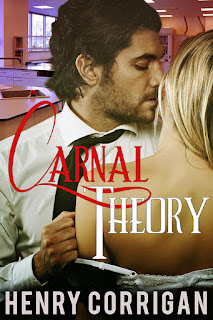 Carnal Theory is my first published novel so to say it’s near and dear to my heart is an understatement. It’s about Dr. Elizabeth Spencer. She is a brilliant behavioral researcher who has a radical theory about sex. She believes that with sex toys being as advanced as they are, people no longer have to worry about finding a partner to achieve lasting satisfaction. They can now enjoy blissfully pleasurable sex lives all on their own.
Like any respected scientist, she needs to test her theory. But when she meets her test subject, Dr. Michael Aaronson, the science and her objectivity begin to go awry.

How much research the secondary characters would require. Spencer has a pair of students helping her conduct the experiment, one of which is named Adara. Born in India but educated in Britain, she is warm and competent and funny but I needed to do a lot of research to make sure not only her speech pattern but her clothes also matched her character. It was an interesting experience, made even more so because it was so new to me.

The other day, someone remarked to me that no one uses pen and paper anymore. It’s all about laptops, phones and tablets now. If this is true, then my quirk is that I always write everything by hand when I’m concocting a story. I use a laptop later on, transcription, editing, etc. But for the real down and dirty creative process, I start with pen and paper. It’s comforting to feel my hand move across the page and see all the craziness come pouring out of my head.

At the very beginning, it all started with Stephen King. My mother has read every story that man has ever published and most of them ended up in a bookshelf in my room. So I caught the reading bug from her and thanks to King I felt like I wanted to be a horror writer. It wasn’t until I started reading Selena Kitt and Rachel Kramer Bussell’s anthologies that I realized I could be an erotica writer.

Most of my family, the ones who know what I do with my spare time, are actually very supportive. My mother and stepfather constantly tell me how much they love my writing. My three weird sisters (some of my oldest and closest friends) always cheer me on every time I publish something. My father and stepmother don’t know what I do, but that has more to do with being able to explain it to them rather than an issue of support.

I am very much into graphic novels and horror movies, much to my wife’s dismay. I’ve been a horror movie fan all my life so my sister and I make a point to try to make it to the theater for new releases. There’s just something special about seeing a horror movie in the theater. I get wrapped up in the suspense and end up jumping at everything, even the cheap scares. Once a year, a local independent theater hosts an all-night horror movie marathon which I’ve been going to for the last several years. There is nothing quite like watching a horror movie in a room full of hardcore horror fans. No one talks or tweets or texts and they cheer during the bloodiest bits. It’s fantastic.

Shortly before I launched Carnal Theory, I finished the rough draft of another book. With the craziness of the launch and marketing the blog tour, I had to put editing it on the back burner. I managed to pick it up again just the other week and have started the dreaded editing process. I don’t have a working title yet but once I’m done with the blog tour my plan is to polish it up. With a little luck and determination, I’m hoping to get it into the hands of a publisher before the year is out. Wouldn’t that be something? To end the year 2015 with two books my readers can get excited about!

Readers can find me anytime on the trifecta of social media. Twitter, Facebook and my blog.
henrycorrigan.blogspot.com
Twitter: @HenryCorrigan
Facebook: https://www.facebook.com/henry.corrigan.35
I’ve met a ton of wonderful people online and I would love to meet a few more (maybe even more than a few). J

Carnal Theory
by Henry Corrigan
Blurb:
Dr. Elizabeth Spencer has a theory about sex.
As Northeastern State University’s leading behavioral researcher, the beautiful yet guarded doctor believes that lifelong satisfaction is no longer a couple’s only game.

After being left to her own devices thanks to years of disappointment, Spencer sets out to put her theory to the test. But when she meets her subject, the handsome, stubborn and unpredictable Dr. Michael Aaronson, more than just the science begins to go awry.
As their sessions together heat up, and the two find themselves more and more on common ground, a sudden betrayal puts the entire project and their careers in jeopardy. Thrust into the national spotlight with questions flying on all sides, Spencer and Aaronson must face not only an uncertain future, but their own pasts as well.

Will Spencer lose everything she set out to prove? Or will she finally find the satisfaction she’s been looking for all her life?

People come to erotica for the heat, but they stay for the heart.
Buy Link:
Amazon http://www.amazon.com/dp/B00YZ0M09U
Smashwords: http://t.co/YSsuB3EUuM
Author Bio:

For more from Henry, you can check out his blog, or find him on Facebook and Twitter.