Spotlight Promo and Contest: MADE FOR US by Samantha Chase! 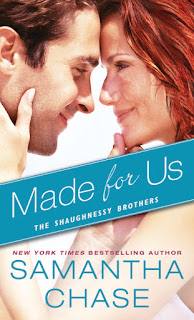 Made for Us is the first book in the new Shaughnessy Brothers series. We start off with eldest brother Aiden who willingly took over caring for his siblings after their mother’s passing and has never looked back. He works to hard and, 17 years later, he’s still fiercely protective of his family.
Zoe Dalton is new to their North Carolina town and, as an interior designer, finds herself working with Aiden on his newest subdivision. Zoe is also dealing with the more recent loss of her mother and has made this cross-country move to heal and fulfill a promise she made.
Their relationship quickly grows as Zoe manages to draw Aiden out of his shell. Their problems start when Zoe interacts more with his family. It threatens the balance Aidan has spent a lifetime achieving and he’s not sure he’s ready for the change. Between work, family, hurricanes and two people who are still dealing with profound losses, their road to happily ever after is guaranteed to be a bumpy one.

This was a very emotional story to write. I’d just finished writing several books in the Montgomery series, but this was a story that had a lot more emotional aspects to it. More layers. I wanted readers to see the ugly side of grief and the times when people say stupid things and aren’t nice and that it’s okay. I think this is the most realistic relationship I’ve ever written.

In the third grade. No joke. I used to love to draw and we had an assignment due where we had to write a short story, but we had to also illustrate it. At first I was more excited about the drawing portion, but after I wrote the story, I thought that it was something I could do more of. I’ve been writing ever since. I hand-wrote my first romance in ninth grade – on loose leaf paper! I’m thankful every day for the invention of the computer!

It varies a lot. When I’m deep into a story, I get up, go directly to my office, check emails and then start writing. I’ll write on and off from maybe ten in the morning until eleven at night. In between I’m on Facebook and do stuff around the house – and shower! – but for the most part I tend to stay focused on the story and try to get anywhere from 3,000-5,000 words done a day.
5. Do you have an interesting writing quirk or habit?
Not really. Although I do find when I hit the two-thirds part of a book, I suddenly cannot write a thing. Like…nothing. I can picture everything in my mind but my fingers refuse to cooperate. It’s the most painful part of every book for me.

That there are mean people out there! Seriously, I was an avid reader who loved to leave reviews and when I got published (particularly when I was self-publishing) the review I got sometimes were just mean! They weren’t constructive or helpful to anyone, they were just attacks! I don’t see the point in doing something like that but it happens more and more and it makes me very sad.

I taught creative writing to homeschoolers for many years. I had students at the high school level who shared with me how they were participating in National Novel Writing Month and getting copies of their stories in paperback and I thought, if they’re doing it, why can’t I? We used to talk about it during class and they started encouraging me! My husband was a big supporter and author Emilie Rose was so incredibly kind and gracious and took the time to invite me to coffee and encourage me to follow my dream. I’ll never forget that.

My husband walks in to my office at least once a week and just shakes his head. He’s always like “So you just decided to write a book.” And that’s really how it went. I just sat down one day and decided to do it. My kids think it’s cool but as for the rest of my family, it’s exhausting trying to explain to them how it all works! I feel like I spend a large portion of every conversation with my dad explaining to him what I’m doing and why I’m doing it and how my schedule goes and how long it takes for a book to come out. Both my parents have been incredibly supportive of my career.

I’m an avid reader, I love to scrapbook, I’m a Disney World FANATIC – someday I may have to just get a condo there – and I’m addicted to HGTV and Scrabble.

There is a LOT of stuff coming up! In October, Sourcebooks is going to re-release my books “The Christmas Cottage” and “Ever After” as a duo in paperback and then in December we’ll see the release of the next Montgomery book, I’ll be There. In 2016 we’ll see another three Shaughnessy books along with the re-release of I think five of my backlist titles – most coming out in paperback for the very first time!

Summary
Can't make time for love?
The Shaughnessy brothers have spent the years since their mother's untimely death taking care of each other and trying to make their father proud. Oldest son Aidan is hard-working, handsome, successful-and still single. Sure, he'd like to have his own family someday, but who has the time?
She'll show him how to find it
Zoe Dalton, a stunning designer Aidan meets on one of his construction jobs, has the beauty and heart to make Aidan realize how much he could be missing. But it's not easy to break down walls you've spent years building up. Now there's a major storm bearing down on the North Carolina coast, and it could be catalyst enough to force Aidan and Zoe into some major decisions of the heart.

New York Times and USA Today Bestseller/contemporary romance writer Samantha Chase released her debut novel, Jordan's Return, in November 2011. Although she waited until she was in her 40's to publish for the first time, writing has been a lifelong passion. Her motivation to take that step was her students: teaching creative writing to elementary age students all the way up through high school and encouraging those students to follow their writing dreams gave Samantha the confidence to take that step as well.

When she's not working on a new story, she spends her time reading contemporary romances, playing way too many games of Scrabble or Solitaire on Facebook and spending time with her husband of 25 years and their two sons in North Carolina.

Thank you so much for the interview and for having me here today!! Great questions!!

Sounds like a good read. Love an emotional story.
LADBookfan