Spotlight on THE COWBOY'S SURPRISE BABY by Deb Kastner 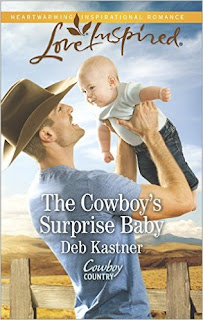 Cole Bishop has come home to Serendipity.  Several years spent in the U.S. Navy serving aboard an aircraft carrier prepared him well for a career in naval intelligence, but instead, Cole is just starting a new job as a wrangler for Redemption Ranch.  Working as a cowboy is far below his skill set, but Cole has a reason for returning home: his seven-week-old son, Grayson.

Tessa Applewhite is a counselor at Redemption Ranch.  Owners, Alexis Haddon and her husband Griff, started this ranch retreat to help troubled teenagers learn life skills.  The teens spend time on the ranch learning to ride the horses, feed the livestock, and attend to all the other aspects of ranch work, including housekeeping and kitchen duties.  The one person Tessa doesn't expect to see in Alexis's office is Cole Bishop.  They've been apart for over ten years, ever since she turned her back on him right in front of the entire town.  She loved him then, but Tessa refused to be a military wife.

For Cole, the most important thing in his life right now is his son.  He doesn't have a wife; he's never been married.  Grayson's mother, Nora, was only a forgettable partner of a one night stand, and she wants nothing to do with the baby, leaving Cole his sole parent.

THE COWBOY'S SURPRISE BABY isn't the only bombshell to confront Cole.  Imagine his surprise when he learns that he instead of wrangling livestock, he's a mentor to a bunch of teenagers!  And, on top of all that, he has to work closely with the one woman who stole his heart in high school and never returned it.  Cole is shocked to see Tessa.  He thought she went off to study law in the big city, but he has to put his feelings aside and focus on his son.

Tessa and Cole have a lot to work out between them, but the teenagers keep them busy while they skirt around their own personal issues and focus on their jobs.  That approach works just fine until some of the town's residents decide to do a little matchmaking.  When Jo from the cafe and Alexis come up with the idea to put on a musical for the summer barbecue, they persuade Tessa and Cole to teach the kids how to perform.  It's the perfect opportunity for the couple to spend more time in each other's company, and a town full of eager babysitters for Grayson helps that along!

THE COWBOY'S SURPRISE BABY is the third installment in author Deb Kastner's Cowboy Country series.  This book follows YULETIDE BABY (December 2014), and THE COWBOY'S FOREVER FAMILY, (March 2015).  Each book stands alone, and all are centered in the small town of Serendipity, Texas with dynamic characters and lots of meddling going on.

THE COWBOY'S SURPRISE BABY is a heartwarming novel of second chances and a new, stronger love for Tessa and Cole, who have a special love coupled with faith and persistence.  The secondary characters are equally engaging as the townspeople take on the mission of pushing Tessa and Cole into each other arms.  Love, faith, and exciting threads of smaller stories weave in and around Tessa and Cole's romance, and makes this a wonderful book to delve into!

Thank you so much for reading my novel and writing this lovely review!