Spotlight and Q &A with Brantwijn Serrah!! 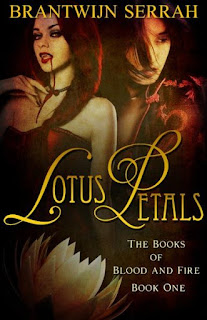 Lotus Petals is a story I've been hoping to share with readers for years. It's the story of a vampire's first love, in a world where demons are never meant to love, and humans are nothing but playthings and prey.  The characters-Rhiannon and Aijyn-have been with me more than a decade, and I'm so very, very excited to have them finally come to life for others, as well!

2.  What was one of the most surprising things you learned in creating your story?
In my research, I discovered the 'precursor' to the geisha were courtesans known as oiran. What I found surprising, though, was that there wasn't a lot of information to find on them! Strange enough not to find a lot of their history online, but even scouring books at the library, it was very difficult to pin them down. I'm still not sure why this is.

Well, I have a real hang-up if I don't have a title for what I'm writing.  I guess it's a quirk. I can know what the story is about, I can even picture every scene in my mind, but unless I have a title that sits well with me, I can't get down word one. It's irritating.

I've always been a writer at heart.  I have to give deep thanks, though, to my husband Ken and my best friend Rissa, who have always pulled for me to get published. They have been my biggest supporters from day one, and that is why Lotus Petals is dedicated to them.

As for authors, I have to say that Jim Butcher, who writes The Dresden Files, is a huge influence and inspiration to me. I would say that even if all I knew of him was what I'd read through his books-they are terrific-but I actually had the pleasure of meeting him, and he just blew me away by being exceptionally open, friendly, and willing to talk shop. I thanked him for his books and told him what an inspiration to me they were, and he was very encouraging that I keep submitting my work, that it would be a success if I kept trying. So that was pretty amazing!

I'm an artist and I draw, paint, and use a Wacom tablet for digital work. I also customize My Little Ponies (Google "custom mlp" if you want to see what that means), and I've recently become interested in sewing plushies.

I've submitted the sequel to Lotus Petals and am waiting to hear back on its acceptance, and I'll be working on the sequel to my second series very soon. I have a stand-alone book in the works called Enslaved.

When she isn't visiting the worlds of immortals, demons, dragons and goblins, Brantwijn fills her time with artistic endeavors: sketching, painting, customizing My Little Ponies and sewing plushies for friends. She can't handle coffee unless there's enough cream and sugar to make it a milkshake, but try and sweeten her tea and she will never forgive you. She moonlights as a futon for four lazy cats, loves tabletop role-play games, and can spend hours watching Futurama, Claymore or Buffy the Vampire Slayer while she writes or draws.
Brantwijn has published three full-length erotic novels: Lotus Petals, Goblin Fires, and His Cemetery Doll. In addition to these, Brantwijn has had several other stories published by Breathless Press, including contributions to the 2013 Crimson Anthology and 2014 Ravaged Anthology.  She's also had a short story published in the Cleiss Press Big Book of Orgasm and the anthology Coming Together Through The Storm. She has author pages on GoodReads and Amazon, and loves to see reader comments on her work. Her short stories and audio readings occasionally pop up at Foreplay and Fangs, her blog at http://brantwijn.blogspot.com.
Short Blurb:

Aijyn, human slave to a ruthless vampire Lord, would never dare do anything to incur his wrath. Then, she fell in love... with his bride.

Longer Blurb:
Rhiannon Donovan, daughter to the vampire Queen, would rather die than be made a bride to a demon Lord. Aijyn, courtesan to the undead Daimyo of Kansai, can think of nothing more horrifying than his promise of eternal life.  In the halls of the Blood Lotus Temple, the two women struggle against the chains of their fate, and find a solace in each other that could mean freedom for them both... or might cost each of them their lives.
Social and buy links
Brantwijn's Facebook Page: http://tinyurl.com/qf2bzwk
Foreplay and Fangs blog: http://brantwijn.blogspot.com/?zx=6ba3380c7201b326
Foreplay and Fangs on Facebook: http://tinyurl.com/q2cmnep
Find Brantwijn on Google+
And on Goodreads
Say hi to her on Twitter
Lotus Petals at Champagne Books
Lotus Petals on Amazon
Lotus Petals on Barnes and Noble

Excerpt
"Rhiannon-sama," she began again, well aware she might be broaching a subject Rhiannon would easily wish to avoid, even to the point of sending her attendant violently away.
"Hm?" the vampire murmured.
"Your bodyguard...she likes to see you in pain."
Rhiannon waited a long time before she answered.
"Perhaps I like pain, mortal."
Aijyn did not argue...but she had seen the expression on Rhiannon’s face when Sölva had tormented her.
"You must hide the scars from the daimyo," she chided gently. "And you cannot allow her to leave any more marks on you, if you do not wish to anger him."
"And if I do wish to anger him?"
"Do not be petulant," Aijyn scolded.
"Does he believe his bride will be untouched? That his kin-born bastard bride will not have experienced acts of the flesh? I am over half a century a living birth-child. Does he realize how most kin-born are meant to earn their keep in demon houses?"
"He expects you will be untouched for him," Aijyn said. "Whatever has gone before, now you are his. And Gohachiro is not a man to share his treasures."
"Doesn’t he like to use pain?" Rhiannon asked. She rolled over under Aijyn’s hands, lying on her side and reaching out to touch the scar she herself had left on the courtesan’s wrist. At the light caress of her finger, a delicious tingle of pleasure ignited under the skin, making Aijyn shiver as the vampire had a moment ago.
Rhiannon pulled Aijyn closer, and lowered herself over the wound to kiss it a second time. The warm arousal intensified, and Aijyn caught her breath as her body awoke to the sensation, nipples stiffening under the soft silk of her kimono.
"Here," Rhiannon whispered, reaching up to brush the dark strands of hair from Aijyn’s shoulder, revealing the tiny, neat scars of bites past. Scars that would never heal the way the vampire’s did, white little lines and half-moons, memories of Gohachiro’s affections.
"Doesn’t he give you pain…" Rhiannon said, following their contours with light but deliberate pressure.
"…so he may turn it into pleasure?"
"Rhiannon-sama…" Aijyn murmured vaguely. One hand had dropped into her lap; the other rested on the vampire’s warm, lean arm. Strange awareness filled her: the touch stirred up the first bloom of eagerness in her loins and the pit of her belly.
"Pain is what we are, courtesan. Pain, hunger, pleasure, death. We are the undead. I am just over half a century old, more than twice your age, and I have been Sölva’s for longer than you have been alive. There are scars you will never see, all over my body: the marks of her fangs, of her whip, the cut of her blade, the pierce of steel needles. And every one of them sings when she touches me, screams when she hurts me...and it is ecstasy."
"Rhiannon-sama…"
Aijyn realized with some dread she had made a mistake. The vampire’s touch brushed against her, terribly light, terribly fleeting, but her voice...soft, beautiful, rich, like strong liquor.
Rhiannon’s hand came to rest on the back of Aijyn’s neck. She gently pulled the courtesan closer, resting forehead-to-forehead and searching deep into Aijyn’s wide, dark eyes.
"You do this for him, too?" she whispered. "You...perform anma for him? You touch his body with such delicate affection?"
"Yes," Aijyn whispered.
"And does it make him want to fuck?"
Before she could think better of it, Aijyn lifted up a hand and slapped her.
The strike was not a hard one. At least, to Rhiannon it would not have been hard. Aijyn’s palm stung as though she had struck it against solid rock, and she quickly pressed it in her other hand, hissing with pain.
Rhiannon did not strike back. She remained perfectly still, her expression unchanging. After a moment, once Aijyn had collected herself, the vampire leaned closer and pressed her mouth against Aijyn’s own.
"It makes me want to fuck," she said. Then she stood, one smooth, languid motion, and retreated to her coffin to at last submit to her daytime sleep.

Thank you so much for hosting us today!