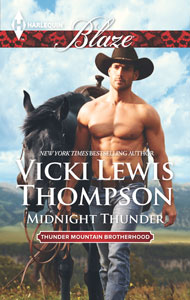 Cowboy Cade Gallagher had just quit his job as a ranch hand in Colorado when he gets a call from his long ago ex-girlfriend, Lexi Simmons, that his beloved foster mother is in the hospital in Sheridan, Wyoming. He races there, knowing he will come face to face with Lexi again, the woman he once loved but whom he couldn’t promise marriage.  Once back at Thunder Mountain Ranch after checking on Rosie, his foster mother, and her husband, Cade decides to stick around for a while to make sure she’s okay. With Cade and Lexi alone, the sexual heat rises once again, and she makes it clear she’s ready for some hot and sweaty sex to happen between them. Is Cade playing with fire by getting involved with Lexi?

While Lexi tells herself that she’s gotten over Cade, he still makes her heart beat fast and she figures getting to the crux of the problem is quicker than evading it. That means making it clear to him she’s open to sex between them with no strings attached. But despite her avowal that she won’t fall for Cade again, she’s soon falling for him again. Cade will be on the road once Rosie is better, so is Lexi asking for trouble by letting Cade into her bed, only to see him walk away again?

The sex is hot, and each time it gets better for Cade and Lexi in MIDNIGHT THUNDER. They were hot and heavy during high school, and she thought they were headed for the altar until he let her know he had no plans to marry her, and they broke up. Soon after, Cade hit the road, working one ranch job after another, but never found a woman he wanted to spend the rest of his life with because it always came back to his first love, Lexi. As a child who landed in foster care, he feels like he’s damaged goods and not good enough for any woman. Can Lexi convince him that he’s worthy of her…and can he stay at Thunder Mountain Ranch?

From the moment she spotted Cade when they were teenagers, Lexi was hooked on him. It didn’t take long for sex to be part of their relationship, and she has fond memories of their couplings in the bed of his truck. He still has that same truck, so it’s bit of a fond homecoming as they try out the truck bed once more. In MIDNIGHT THUNDER, while they’re all worried about Rosie’s health, Cade and Lexi still find time to get “reacquainted.” But when it comes time to leave, will Cade have second thoughts? What about the plans to help Rosie and her husband hang onto the ranch after Cade learns it’s about to be foreclosed?

MIDNIGHT THUNDER is the first book in Vicki Lewis Thompson’s Thunder Mountain Brotherhood series about a trio of foster brothers who vowed to be brothers despite there not being any actual blood relationship among them. In this tale we get to meet the other two brothers and their backgrounds, with a hint of the ladies who will soon have them groveling in their own books.

Grab an icy cold drink because you’re going to need this to read MIDNIGHT THUNDER. Sex between Cade and Lexi just may be better this time around. Will it lead to a happily-ever-after this time? Find out in this sizzling tale that I highly recommend.

“This modern cowboy tale expertly balances sex and emotion with a touch of humor. It’s one of the hottest western romances of the year!”
–RT Book Reviews on Claimed!

“[The series] has cowboys, it has sizzling sex, and the books are all well written.”
–Sugarbeat’s Books on Cowboys Like Us

“Once again Ms. Thompson’s writing is crisp and straightforward, with an uncanny ability to weave the beautiful western landscape of the Grand Tetons into the storyline. Overall a hot, sexy read.”
–Harlequin Junkie on Riding Home

MIDNIGHT THUNDER
by New York Times Bestselling Author
Vicki Lewis Thompson
Thunder Mountain Ranch was the only place cowboy Cade Gallagher had ever called home. But after he and Lexi Simmons broke each others’ hearts, he left it behind, along with his foster family. Since then, Cade has drifted, looking for something—anything—to call home. Until a call from Lexi changes everything.
Cade has been gone too long. His foster mother is hospitalized, and the ranch is in deep financial trouble. Yet even as his world crumbles, Cade’s hunger for Lexi is almost as tangible as the taste
of her lips and the way her body fits deliciously against his. It’s bittersweet surrender. But Lexi isn’t the girl she used to be, and she’s determined to have the hot cowboy in her bed only if she keeps him out of her heart.

ABOUT THE AUTHOR:
A romance writing career has brought Vicki Lewis Thompson many wonderful things –New York Times bestseller status, an appearance on LIVE with Regis and Kelly, the Nora Roberts Lifetime Achievement Award from Romance Writers of America, thousands of readers, many dear friends, and the cutest little yellow convertible in the world. Her career has also given her work she loves. Although she’s written more than 100 books, she continues to be fascinated by the many ways that a man and woman fall in love. The age-old story remains a challenging puzzle to be solved anew with each book. That makes her a very lucky person, indeed.
Website: http://www.vickilewisthompson.com
Twitter: @VickiLThompson
Facebook: www.facebook.com/vickilewisthompson