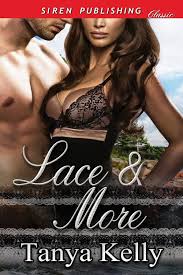 Kim Morrison knows she has a few indulgences that cause tongues to wag, with her fondness for sexy 5” stiletto heels, wine, loud music, and hot guys—not in that order.
She loves the single life. Monogamous relationships and happily ever after fairy tales belong in exactly that…fairy tales. Kim once made the mistake of falling in love, and she doesn’t plan on repeating it. But a girl’s gotta have male company and can’t rely solely on toys.
Millionaire land developer, Damon Black, arrives in Beechfield with one purpose. Revenge. From the moment he sees Kim, the woman who betrayed him, he is engulfed by memories he thought were long buried.
Determined to get vengeance, Damon sets on a course of destruction. As the passion re-ignites between them, Kim is convinced she can enjoy the mind-blowing sex without getting emotionally involved this time.
But when the past collides with the present, Damon must re-evaluate everything. Will his hate cost him his love?

AUTHOR INTERVIEW
Q: Tell us about your latest release, Revenge & More?
A: Revenge & More is Kim Morrison’s love story. Kim was introduced in my first novel, Lace & More as the fun, outspoken BFF and her character became so strong to me that I knew she needed her own happily ever after.
Q: What makes this story so special to you?
A: Every story I write is special to me for one reason or another. In the case of Revenge & More, the idea of never getting over or moving on from your first love holds dear to me. They do say you never forget your first love. Thankfully, I married mine J
Q: When did you first realize you wanted to be a writer?
A: In high school I found I could always better express myself thru writing. Family and friends joked that I was a dreamer. Always had my head in the clouds. Romance was my true passion from an early age. Whether it was short stories, poems or letters, most of my writing always centered around love and romance or as a typical young woman—around heartbreak.
Q: What is a typical writing day like?
A: I’m an early riser thanks to my husband who created that habit…which wasn’t always the case. I try to write as soon as I’m up with coffee with in hand for an hour before kids get up and the workday starts. Then if I’m not taking my son to hockey or not too exhausted, I’ll get some more caffeine into me and write in the evening.
Q: Do you have an interesting quirk or habit?
A: I always put on music when I’m writing. It becomes background noise to drown out a houseful of boys. The rule in the house is if my office door is shut and music is on, do not disturb unless someone’s bleeding…lol.  I won’t even bring my cell phone into my office because if I’m having trouble with a scene, the temptation of checking my phone for a distraction is too strong.
Q: What was one of the most surprising things you learned as a published author?
A: I think the thing that blew me away the most was how supportive other published authors are. I didn’t expect and was pleasantly surprised by how many more seasoned authors would gladly give advice, help promote your release or just offer an ear to listen. I’ve met some fabulous writers and made some great friends that have really helped me learn the ropes in this industry.
Q: What authors or friends influenced you in helping you become a writer?
A: Christine d’Abo, an amazing author and a good friend was a big influence. We used to be critique partners many years ago and seeing her follow her dreams and the success she’s achieved encouraged me to finally do the same.
Q: What does your family think about your career as a published author?
A: They are all very supportive and proud of me, including my parents who raised me to dream big. My husband likes to think every hero I create is inspired from him and truthfully, he can take a lot of credit. He is my best friend, my rock and the love of my life—not to mention sexy as hell.
Q: Besides writing, what other interests do you have?
A: I love reviving old furniture. I’ll visit thrift stores and yard sales looking for solid pieces with character that have seen better days. But then I’ll give them new life. Sometimes I sell the pieces or keep them. My house is a mixture of modern, new furniture and unique pieces I’ve redone.
Q: Can you tell us about what’s coming up next for you writing wise?
A: I currently have two more novels in the works. One is a novella with a young woman dealing with a traumatic past and the man who helps her let go and embrace life. The second is a longer story and while it would still be considered romance, it could also be considered chick lit. It’s full of humor, friendships, love and finding yourself.