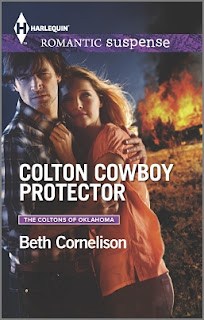 After losing her cousin in an auto accident while Laura was helping her flee her abusive husband, Tracy McCain wants nothing more than to repay her cousin’s sacrifice by getting close to Laura’s little boy, Seth. She can do this now that her own husband is dead. With freedom and insurance money, Tracy leaves Denver for Oklahoma and the Colton ranch. She accidentally crashes a lavish party, complete with press and cameras, put on by Laura’s ex in-laws to announce the engagement of their daughter Greta. Taken variously as a guest and caterer’s staff, it takes a while for Tracy to find Seth’s dad, Jack Colton.

Laura just could not take life on a ranch after growing up in the suburbs; she had no interest in the great outdoors or the animals. She left when Seth, now five, was just a little guy, believing he’d be better off staying with his father and wealthy family than with her as a single mom. Tracy wants to tell Seth about his mother and how much she loved him, but, right away, Jack is positive Tracy is after money and orders her to leave. His sister Greta, however, invites Tracy to stay in the big house for as long as she wants. Jack and Seth live in the original ranch house, a long walk away. Even with the antagonism and disappointment, a current of interest flows between Tracy and Jack, something they both try to ignore. It’s not easy; Jack doesn’t want Seth to be alone with Tracy—he told his son that his mother died, rather than have him know she left him. And then it becomes apparent that someone malevolent has an interest in Tracy. Jack’s protective side kicks in and moves Tracy closer, even though Tracy wants to leave if she has brought danger to Seth and the ranch.

The Coltons are a large, extended family and Harlequin has other miniseries about them, But the Coltons of Oklahoma have the potential for at least five more highly readable books. (Some already in the works by other authors.) Don’t forget the newly engaged Greta, and the other Colton sons are eligible hunks as well as Jack. There are Brett, a playboy; Ryan, with the Tulsa Police; Dr. Eric, a trauma surgeon; and half-brother Daniel, a horse whisperer. You’ll like the patriarch, John (Big J.) Colter, but probably not the uppity matriarch, Abra.

You won’t go wrong getting in at the start with the enjoyable and suspenseful tale, COLTON COWBOY PROTECTOR.

“Steady pacing and a solid plot, complete with a dramatic, passionate ending, are all hallmarks of one terrific romance.”
–RT Book Reviews on Colton Cowboy Protector

“Ms. Cornelison has written a multi-layered story of fear, passion, and risks. Her characters, the story, the romance itself are memorable…”
–Once Upon a Romance Review on Healing Luke

“Cornelison has written a page turner that is truly enjoyable from beginning to end.”
–Fresh Fiction on Cowboy’s Texas Rescue

“Be ready for a roller coaster ride of emotions while you enjoy this wonderful novel.”
–Long and Short Reviews on Reyn’s Redemption

A beautiful stranger appears at the Colton ranch during a party, and Jack is none too pleased. With ties to his ex-wife, Tracy McCain claims to be on a mission to bond with his son. But this intriguing widow also has a target on her back. As the Colton family brings Tracy under its broad wing, a relentless assassin puts everyone in jeopardy. Jack's protective instincts go into overdrive and only fuel his secret attraction to Tracy. Living closely together under Jack's roof, the heat between them starts to sizzle. In fact, the only thing stronger than Jack's heady desire for Tracy is his will to keep her safe so that one day they can become a family.
ABOUT THE AUTHOR:
Award-winning author Beth Cornelison has been writing stories since she was a child. A University of Georgia graduate, Cornelison worked in Public Relations before becoming a full-time writer. She has won many honors for her writing, including the coveted Golden Heart, awarded by the Romance Writers of America. She lives in Louisiana with her husband and son.