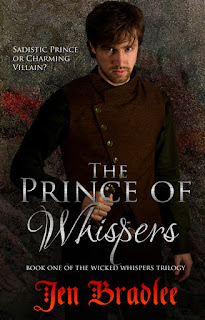 Well, The Prince of Whispers is a historical erotic romance set in the mid-Fourteenth Century. The hero (and I use that term loosely since he's very much an anti-hero) is a self-centered, cocky, silver-tongued prince by the name of Crispin Saville. He is heir to the throne of Meradin, a country nestled between the UK and Ireland. Despite the best efforts of his parents to raise him properly, Crispin is wild and stubborn, hell-bent on satisfying his own lustful cravings be it for women or power. Chastised and thrown from the castle, Crispin wanders into trouble, where he's rescued by the infamous outlaw, The Lady of the Forest. Ruby takes an instant dislike to him, even before she discovers his true identity. Without trust, the intense sexual attraction between the two threatens to ruin both of them. As murder and treason are uncovered in the kingdom, Ruby and Crispin must find common ground and work together in order to stop the chaos threatening to consume the nation.

It is the first book in a trilogy. The novels will each have a Happily For Now ending, but they will need to be read in order to get the complete story in chronological order. I try not to do cliffhangers, yet that's hard to not do when you have a story like Crispin's.

One of the most surprising things I learned was how much I could come to love and hate a character in equal measure. Crispin has created a paradox within my heart. I loathe him because he never allows me any control in the story. He tells me exactly what happens and expects me to follow him blindly. I'm used to my characters talking to me, but Crispin pushes me beyond that. He hovers and often likes to speak to me at the most inopportune moments. Everything is a seduction to him; he has a way of commanding a room with a simple spoken order. Unfortunately, I am not immune to it.

I listen to music as I write. I have to have some kind of background noise with a beat. It gives me a rhythm to follow and often will fill in the mood of the scene in my head. There are several playlists on my computer that I rotate through, but for Crispin, I listened to my Loki playlist, since he was the original inspiration for Crispin's character.

I have several author friends who gave me the support and push I needed to get into writing. Decadent Kane is the one who told me to write Crispin's story when I told her some of the things he whispered to me. I'm fortunate to have a small contingent of writers who will beta read for me as well as brainstorm ideas when I get stuck. I couldn't write without a network like that. I'm a lucky girl.

My family is supportive, but it can be difficult to support someone who spends a large quantity of time on the computer writing. They're always excited when I take breaks to go out on an adventure with them, like hiking or camping. I try to balance both writing and family time, you know, to keep the peace.

I love belly dancing. Well, any dancing really, but belly dancing is sensual and soothing. It's also a great way to get my husband's attention. *wicked grin*

I also dabble in photography and gardening, play otome games, and read manga. I'm also a rabid fangirl for Tom Hiddleston, Benedict Cumberbatch, and David Tennant. So...yeah, there's that. Sorry, I'm sure you didn't want a confession there.

My publisher recently closed, so I will be going through the short stories I had published with them and releasing them myself. I have shiny new covers and man, are they gorgeous. Once they are released on Amazon and Smashwords, I will be starting the plotting process for Crispin's second book. I'm also in the middle of writing a few small projects. I guess I'll have to wait and see which characters are speaking the loudest. But I will tell you, one of the stories I have in the queue is the story of Topper and Madame Red, who were secondary characters in my Wonderland inspired tale, A Cat Without a Grin. These two will set the brothel ablaze.

If you are expecting a traditional medieval tale or charming prince, you will not find it here. I am not like other men for I have a voracious appetite and will appease it no matter the cost. Do you doubt my confession? Then I invite you to step into my kingdom.

Women were created for pleasure, tis my obligation to see them fulfilled. When I whisper, they come to me. All save one...Lady Ruby. I can see the desire in her eyes even though her pure and noble heart fights against it. She may be an outlaw, but a rare gem such as she has never been found in Meradin.  She is my challenge, my penance, and my weakness. Nothing short of Almighty God Himself can keep her from me. I shall possess her. Ruby is mine.

Dear reader, will you begrudge me your company when you learn of my past and how wicked I can truly be? Or will you come to me willingly, surrender yourself to my charms, and beg for more? Surely my tale of intrigue, murder, and treason will be enough to tempt you to sin with me if only for a short while. Come with me, and I will lay myself bare.

His gaze narrowed. "Do not mistake my interest in you for compassion, Ruby. I have never been a thoughtful or compassionate man."
"What do you want from me?" she asked. "I have no coin, no wealth, nothing that would satisfy your greed."
"Is that so?" he whispered, reaching up to brush his fingertips across her jaw and down her neck. She was softer than he had imagined, and his cock hardened at the solitary touch. "I think you underestimate your own value, my lady." His hand stilled instantly at the cold press of a blade against his inner thigh.
"One more move, bastard, and I'll send an entire kingdom of whores into mourning."
Ruby's threat hung between them. Crispin watched her closely. He could see the lust in her gaze, but she was fighting it and winning. He dropped his hands to his sides.
"I yield," he said. Even though he no longer touched her, he was close enough to feel the heat radiating from her. He bit his lower lip in agitation. Her gaze fluttered to his mouth, and he saw her silent gasp, the hitch in her breathing. He grinned and took a step back. "Please, join me. You are welcome to use the bath, if you are so inclined."
Ruby shook her head. She approached the table where his dinner sat. "May I?" she asked, glancing at him.
Crispin nodded. His appetite had shifted. He watched her take large, ravenous bites. He glanced down at his erection. It was obvious he would have to woo her into his good graces. He shuddered to think what she would do to him should his identity be revealed, but even if they did indulge in some bed sport, he would be long gone before she realized he was the prince. He snatched his trousers off the bed and pulled them on. She ate silently, occasionally sneaking a peek at him.
"Enjoying your meal?" he asked, lying down on the bed.
"Aye," Ruby said around a mouthful of food. She swallowed and turned toward him. "I believe the guards must have left by now." She stood and headed for the door. "I thank you, again."
In an instant, Crispin was on his feet, his body between her and the door. Her surprised expression reminded him of cornered prey. He took a step closer to her. She swallowed and licked her lips.
"I need to leave. Stand aside." Ruby shook her head and stalked forward, pushing against him, hoping he would move.
Crispin grabbed her by the waist and backed her up, tumbling them both onto the bed. He took her wrists and held her hands above her head, securing her under his weight.
"Why must you be so stubborn?" he asked, his voice husky.
"Why must you restrain me?" She arched a brow. "Get off."
"So you can draw your weapon against me again? I think not." Crispin groaned as she struggled beneath him. "The next time you threaten me with a blade, you had better be prepared to use it."

Jen Bradlee can get away with murder, metaphorically speaking of course.  She is a sensual woman who enjoys people watching, belly dancing, and taking walks in the rain.  Give her a man who isn't afraid to get his hands dirty and plays hard. The ones with rough edges and a little scruff are the best. She finds cathartic release when she pours all her fantasies and desires into her writing.  Comes with a warning label.  "Too hot to handle."