Spotlight on ... THE SCOUNDREL AND THE DEBUTANTE by Julia London 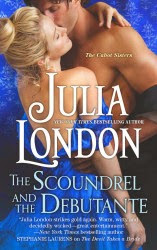 As the third of four wellborn sisters and the least impetuous one, Prudence Cabot has reached her twenty-second year without even coming close to a proposal. Both Honor and Grace have both married well in spite of their rather scandalous behavior; one of them is a countess. Prudence blames her sisters for blighting her chances for a happy life. When an invitation for her to visit her best friend who is married and expecting her first child arrives, her sisters urge her to accept. She gives in; she’s due for a bit of adventure after years of obeying every rule. It’s arranged for her to travel north with a doctor and his wife. As Prudence waits in town to meet them, she uncharacteristically defies her name and winds up boarding a public coach instead, rather than spend hours listening to Dr. Linford tediously expounding about the weather.

American Roan Matheson has come to England to bring home his younger sister. She was traveling with an aunt and uncle, but insisted on remaining another month with friends she has made...thus making her family very unhappy. Roan has difficulty understanding English accents and consequently travels in the wrong direction. A young lady he meets along the way helps him unravel his itinerary and buy him a ticket on a north bound coach. She then decides to go along. The ride is uncomfortable to say the least with six passengers in a coach built for four. Prudence is squashed between Roan and a large, nosey middle aged woman.

Nearly everything that could go wrong does on a journey full of mishaps and dangers, discomfort and awakening hungers…of more than one kind. Never mind the probability of Prudence’s name being besmirched. And do they ever find Roan’s elusive sister?

Roan is not really a scoundrel as the book’s title suggests. He has always been a dutiful, responsible son. It is Prudence’s reacting against the strictures of an aging maiden’s life that began it all. Go along on the bumpy ride with the handsome Roan and the blossoming Prudence and be highly entertained. So what if nothing can come of their mutual attraction? Can it?

Honor, Grace and their husbands, along with the youngest Cabot sister, Mercy, who wants to be a great artist, add much to the story, especially later on in the book. You might want to read THE TROUBLE WITH HONOR and THE DEVIL TAKES A WIFE first if you haven’t already, though it’s not necessary to enjoying THE SCOUNDREL AND THE DEBUTANTE.

Where to buy your own copy:   http://julialondon.com/books/scoundrel-debutante/