Regina Kyle tells us about..... TRIPLE TIME... her newest release! 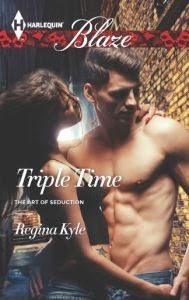 I’m so excited to be back at Romance Reviews Today! I was here in October talking about my debut novel, Triple Threat, and it’s hard to believe I’m already back talking about the second book in the Art of Seduction series, Triple Time.
Triple Threat was set in the theater world, one I know well thanks to my years of performing in school and community theater and as stage mother to my now sixteen-year-old daughter, who worked professionally for years and even toured the United States playing Jane Banks in Disney’s Mary Poppins. So I really didn’t have to do a whole lot of research (except into minor things like how to pick a good brand of scotch or what plants are native to the northeast).
But Triple Time was a different story. Sure, Gabe’s a district attorney and so am I (by day), so the legal part of the plot came second nature to me. But there are lots of other elements that weren’t so easy.
Like tattoos. Devin’s a tattoo artist. I don’t have any tattoos (my fear of anything painful pretty much precludes that). I’ve never even set foot in a tattoo parlor, but there’s a number of scenes in Triple Time that are set in Ink the Heights, the Washington Heights studio where Devin works. So when it came time to write those scenes I did what any inquisitive, perfectionist author would do: talked to my friends with tattoos, found a good local place to visit and asked a heck of a lot of questions that the patient folks there were kind enough to answer.
Then there’s art. Each of the books in the Art of Seduction series has a connection to the arts. In Triple Threat it was theater; in Triple Time Devin is a tattoo artist by trade who paints on the side, and secretly dreams of having her work shown in a New York gallery. There’s one particular scene set in the Metropolitan Museum of Art that took a bit of finagling. Sadly, I couldn’t make it to the museum for a visit, but the internet is a wonderful thing. I found pictures and maps and all sorts of information on the layout of the museum and the special exhibits they’ve had there. It made me realize that one aspect of the scene as originally planned wasn’t feasible, and it helped me craft a more realistic scene where Gabe – with the help of his famous ballerina sister – arranges to takes Devin on a special, after-hours tour.
But the most challenging part of writing Triple Time had to be writing the scenes with Devin’s autistic brother, Victor. I have several friends with special needs family members, and I wanted to make sure I wrote a character who was more than a cardboard cut-out of what people expect someone with autism to look like. I did a lot of reading and spent time with a friend and her special needs daughter. And in the end, I struck what I think was a good balance with Victor. Perhaps one of the most rewarding comments I’ve gotten on the book was from a fellow who has a child on the autism spectrum, who said that she was “touched and happy” with the way I handled Victor’s scenes and that he was portrayed in a sensitive light that wasn’t gushy but realistic.
Now I’m working on the third book in the series, Triple Dare. This one has a firefighter hero (Cade, Gabe’s best friend who appears in both Triple Threat and Triple Time), and the heroine, Ivy (Gabe’s twin sister), is a photographer. So you can imagine what my Google searches look like this go around. And having to visit a firehouse and talk to firemen – well, that’s just another one of the hardships I endure for the sake of my art.
Book Blurb:
How to unravel your straight-laced lover . . .
Gabe Nelson would be a great district attorney, but his public image is too boring to get voters’ attention. Tattoo artist Devin Padilla can help him show off his fun, sexy side, but she needs something in return—Gabe’s legal expertise to track down her missing brother. She’s not his type, but they can’t keep their hands off each other, whether it’s good for his image or not.
At first, Devin thinks she got the easy end of the bargain. Gabe’s the sexiest stuffed shirt in Manhattan, and his kisses practically set her on fire. But every deal has its fine print. As their relationship goes from business to pleasure, Devin realizes this one won’t cost her soul…it’ll just steal her heart.
Buy Links:
Amazon: http://tinyurl.com/qe5gccp
Barnes and Noble: http://tinyurl.com/n4tgswa
Author Bio:

Regina Kyle knew she was destined to be an author when she won a writing contest at age ten with a touching tale about a squirrel and a nut pie. By day, she writes dry legal briefs, representing the state in criminal appeals. At night, she writes steamy romance with heart and humor.

A lover of all things theatrical, Regina lives on the Connecticut coast with her husband, teenaged daughter and two melodramatic cats. When she’s not writing, she’s most likely singing, reading, cooking or watching bad reality television. She’s a member of Romance Writers of America and her local RWA chapter. Triple Tine is her second novel. She is also the author of Triple Threat, the first book in her Art of Seduction series for Harlequin Blaze.
My Links:
www.reginakyleauthor.com
www.facebook.com/reginakyleauthor
www.goodreads.com/goodreadscomreginakyle
@regina_kyle1
Excerpt:
He checked the clock behind the bar. Where was Devin? He’d never understood why women took so long in the bathroom. What the hell did they do in there, anyway?
“Seriously, Gabe. I’m worried about you.” Kara pulled out the stool next to his and sat, putting a hand on his thigh. Her shiny red nails were a stark contrast to the faded denim of his jeans. “The clothes. That girl you’re with. I wanted to talk to you earlier, but I was afraid she’d come at me with a switchblade.”
Christ, had she always been so judgmental? Yet another flaw he’d overlooked.
“I’m a big boy.” He picked up her hand and removed it from his leg, relieved that he felt nothing when she touched him. “I can take care of myself.”
“I’m sure you can, but…”
“Hey, babe.” Devin came up behind him and snaked an arm around his waist. Her hand came to rest on his hip, sending a bolt of white‑hot desire to his groin. “Sorry I got held up. The line was ridiculous. Miss me?”
She reached up on tiptoe and gave him a down‑and dirty, take‑no‑prisoners kiss, with just enough tongue to make it borderline obscene in a public place. He barely had time to reciprocate before she broke it off, sliding down his body and giving him a look that said Sit back and hold on tight. This is gonna be a wild ride. “That’s okay. You don’t have to answer. Your hard‑on speaks for itself.”
Kara gasped, and Gabe almost laughed out loud at the shocked look on her face.
“Are you okay?” Devin took a half step toward the other woman. “I know CPR. And the Heimlich maneuver.” “I’m fine.” Kara held up a hand to stop her. “Thanks.”
“Good.” Devin turned to Gabe and laid a palm on his chest. One finger traced the lettering on his T‑shirt. “What do you say we skip the last stop on the tour and go back to my place? I’ve never been a big fan of E. E. Cummings anyway.”
“I don’t know,” he teased, finally getting the idea and playing along with her. “That Black Label burger sounded awfully good.”
“I promise I’ll make it up to you.” She pressed a kiss to the hollow between his neck and shoulder, making his pulse jump.
“Well, in that case…” He picked Devin’s purse up off the bar and handed it to her. “It’s been nice catching up with you, Kara.”
The polite lie tripped off his tongue. He gave Kara a dismissive nod and put his arm around Devin, shepherding her toward the door. Devin returned the favor by slipping her hand into his pocket and squeezing his ass. His cock twitched and his mind burned with a question only Devin could answer.
Was she serious about going back to her place? Or was it all an act for Kara’s sake?
at May 21, 2015