Promo Spotlight and Contest: KILTS AND DAGGERS by Victoria Roberts! 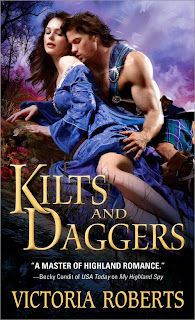 
Thank you for having me here today.


Kilts and Daggers is the second book in my award-winning Highland Spies series. This story follows Lady Grace Walsingham (Ravenna’s sister from the first book) and Fagan Murray (the captain of Laird Sutherland’s guard.)


Grace wants nothing to do with the Highlands, Scotland, or any man wearing a kilt. Let’s just say she’s in for a surprise when Fagan starts capturing her attention. Sparks definitely fly.


Here’s the back cover blurb:


Ever since Lady Grace Walsingham discovered her uncle and sister are spies for the Crown, she has yearned for adventure. She's counting the days until she can leave barbaric Scotland behind, even if she must endure Highland captain Fagan Murray's company for weeks.


Fagan has a simple mission: escort the haughty Lady Grace back to England. But nothing is ever easy. The sharp-tongued woman needles him at every turn. But when a menacing threat follows them on their journey, Fagan's grudging tolerance for Grace turns to respect...and into a perilous attraction that could seal their fate.


There were a couple fiery scenes that were my favorite. I love when Grace “tries” to put Fagan in his place. I favor the first kiss scene, but I don’t want to give spoilers. You’ll have to read that for yourself. *smiles*


3.       What was one of the most surprising things you learned in creating your story?


Grace tended to get a little wild. I had to rein her in a time or two.


4.       What authors or friends influenced you in helping you become a writer?


My fabulous critique partner definitely helped me become a writer, but several authors inspired me to want to write about men in kilts. Some of my favorites are: Karen Marie Moning, Hannah Howell and Lynn Kurland.


5.       What does your family think about your career as a published author?


Oh, they love it, especially my son who accompanies me to all my book signings. He dons his kilt and proudly uses his swagger to bring the lasses over to my table to buy books. (He’s only ten.) My daughter likes to brag to her Language Arts teacher about her mom doing signings with Nora Roberts, and my husband claims he’s the cover model for all my books. The only time they’re not happy is when I’m in deadline mode. Everyone knows to tread carefully. lol


I have plenty of interests but not enough time in the day. I love to go antiquing or play my guitar.


To keep up with the latest news, readers can join my newsletter at victoriarobertsauthor.com. You can also find me on Facebook at www.facebook.com/victoria.roberts.395.

“This book begs to be read and reread.”—RT Book Reviews, 4 1/2 stars on My Highland Spy

Ever since Lady Grace Walsingham discovered her uncle and sister are spies for the Crown, she has yearned for adventure. She’s counting the days until she can leave barbaric Scotland behind, even if she must endure Highland captain Fagan Murray’s company for weeks.

Fagan has a simple mission: escort the haughty Lady Grace back to England. But nothing is ever easy. The sharp-tongued woman needles him at every turn. But when a menacing threat follows them on their journey, Fagan’s grudging tolerance for Grace turns to respect…and into a perilous attraction that could seal their fate.

More praise for My Highland Spy:
“Beautiful! This book has it all.”—Night Owl Reviews, 4.5 Stars, Reviewer Top Pick
“One of the best... an outstanding Scottish romance.”—Romance Reviews, 5 Stars
“An exciting Highland tale of intrigue, betrayal, and love with a braw Highland hero and strong English heroine any reader will love.”—Hannah Howell, New York Times bestselling author of Highland Master

About the Author
Victoria Roberts writes sexy, award-winning Scottish historical romances about kilted heroes and warriors from the past. Prior to ever picking up a single romance novel, she penned her first young adult novella at 16 years old. Who knew her leather-studded motorcycle hero would trade in his ride and emerge as a kilt wearing Highlander wielding a broadsword? Victoria lives with her husband and their two beautiful children in western Pennsylvania.

Excerpt from KILTS AND DAGGERS by Victoria Roberts
“Mister Murray, I don’t feel at ease discussing these subjects with you.”
“Then call me Fagan. Mister Murray was my father’s name anyway.”
Grace looked around and then softened her voice. “Now is that truly appropriate?”
“I told ye before. Ye’re a long way from England, lass. Lest ye forget, ye’re in the Highlands now. We do things differently here.”
She lifted a brow. “How could I forget?”
“Ruairi said ye’ll be staying with us for a few weeks. More to the point, I already call Ruairi’s wife Ravenna.” He turned up his smile a notch. “Ye and I are practically like family. Ye will call me Fagan, and I will call ye Grace, or I could always call ye bhana-phrionnsa. I’ll be kind enough to give ye a choice.”
“Ravenna may permit you to call her by her Christian name, but I certainly do not, Mister Murray. Although you do make me laugh, I’m afraid you and I are far from family.”
***
When Grace’s eyes smoldered, Fagan knew he shouldn’t get too close to the flame for fear of getting burned. There was still enough time to take his leave. Otherwise, he’d be verbally sparring with a lass in the middle of the great hall. Ruairi would no doubt have his head for causing mischief with his kin so soon after the wedding.
Fagan slapped both hands on the table and casually stood. Instinctively, he took another step back in case the lass suddenly had a strong urge to reach across the table and throttle him—or worse. Nevertheless, once she heard what he was about to say, the table wouldn’t provide enough space between them.
“Verra well then. I think bhana-phrionnsa suits ye quite nicely.” When Grace’s cheeks turned scarlet, Fagan smiled. “Donna say I didnae warn ye. Remember I did give ye a choice.” He winked at her and then turned on his heel.
“Wait!”
He had a hard time trying to mask his smile. He turned around slowly and lifted a brow. “Aye?”
Grace flew to her feet, walked around the table, and closed the distance between them. She lifted her head, and by the way she was unsteady on her feet, he swore the daft lass was standing on the tips of her toes in a futile attempt to look him level in the eye.
“England and Scotland have been warring for centuries, Mister Murray, yet somehow Scotland has never won.” Lifting her skirts, she brushed his arm with her shoulder and took a few steps away from him.
That was until he called after her and stopped her dead in her tracks. “Cuine a chì mi a-ris thu, Grace?” When will I see you again? He made certain he said the words as though he spoke to his lover, which obviously had the desired effect because her whole body stiffened, and then she left him without a backward glance. Fagan’s mood was suddenly buoyant. He wasn’t exactly sure why he loved to unnerve Princess Grace, but he had one hell of a time doing it. 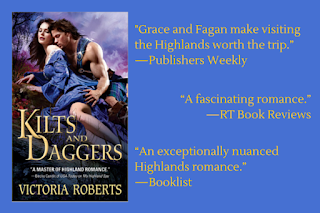 Giveaway for 3 copies of MY HIGHLAND SPY by Victoria Roberts

This sounds good thanks for the review
Penney

Hi if you pick my name please pick someone else as I brought the book yesterday , thank you
Penney