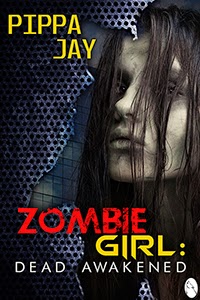 Zombie Girl: Dead Awakened is a young adult dystopian short, set about a hundred years in the future in a city that seems like utopia. My teen hero Connor wakes from a year long coma with no memory, only to learn that a bioweapon wiped out most of the population and turned the rest into mindless cannibals. Now he's got to survive on his own.

I had to do a lot of research on the causes, symptoms and after effects of comas. About 40% are caused by drug poisoning and 25% by loss of oxygen, including heart attacks. All surprising stats to me.

I don't know that they're interesting or particularly quirkly, lol. I have to listen to music while I'm writing, but need silence when I'm editing.

Three good friends encouraged me along the way as I was starting out. I don't think I'd have got this far without their support in those early days.

They thought I was a bit nuts to start with, but now my little monsters think it's cool having an author as their mum, and my hubs is often the one to encourage me when I get my down days.

I love to dance, to sew, and I've just started customizing some dolls to look like characters from my books to have as a centerpiece at conventions.

I'm re-releasing my debut science fiction romance novel Keir next month, then the print edition of my superhero romance When Dark Falls releases in June. I'll also be polishing Zombie Girl 2 up for submission, and writing ZG3 for July's Camp NaNoWriMo.

You can stalk me at my website, or at my blog, but without doubt my favorite place to hang around and chat is on Twitter as @pippajaygreen.

Imagine waking up to find the world has ended, but unfortunately you're not alone...
For Connor Innis, awakening from a year-long coma with no memories, no ability to move, and unable to speak was bad enough. Then he learns that a bioweapon set off a zombie apocalypse—for real—while he was sleeping, and the world he can't even remember no longer exists.
Rehabilitation might be torture, but far worse awaits him outside. All too soon, the hospital Mentor declares him fit to leave but with nothing to go home to except a city full of mindless, flesh-eating monsters. That is, until he forms a strange relationship with the one he nicknames Zombie Girl.

There was a zombie outside the window, staring in. Every last fragment of hope that he'd had curled up and died. Not a person. Just a zombie at the door, setting off the buzzer probably by pure chance. He might as well have thrown himself off the balcony.
Heart pounding hard enough to make his chest ache, Connor stood very still. He stared into the misted grey orbs of her eyes. She stared right back. Not at him, but through him, as though something infinitely more desirable lay far beyond anything she could see. He read a kind of dull desperation in her blank face. A longing. Even if that longing was just to tear him apart and devour him. Or maybe that was his imagination.
"Hello?" His voice came out as a dry croak and he wet his lips. He had to try something. He couldn't spend the rest of his life in silence and alone. Even this poor shell of a human was better than that. And maybe—just maybe—he could reach her. Maybe even help her find a fragment of her lost humanity. "Can you hear me?"
No sound or movement. No response at all.
Despair squeezed his throat. The hospital Monitor said the victims didn't suffer brain damage. The virus just stopped all the normal responses, isolating higher functions from their basic animal instincts. Even animals could react to a voice.
"Hey!" He banged on the glass, but even that didn't break her hungry stare. Perhaps she couldn't hear him, let alone understand or respond. Losing those higher functions must have included any communication ability.
Connor sighed, then placed his palm flat on the glass. "I wish you understood me. I wish you hadn't all got sick when I didn't." He rested his forehead on the glass and closed his eyes. "I really wish I could help you."
A moment later a dull thud and a vibration in the glass drew his attention. He raised his head.
She hadn't moved from staring. But her hand pressed against his, separated only by the glass.

After spending twelve years working as an Analytical Chemist in a Metals and Minerals laboratory, Pippa Jay is now a stay-at-home mum who writes scifi and the supernatural. Somewhere along the way a touch of romance crept into her work and refused to leave. In between torturing her plethora of characters, she spends the odd free moment playing guitar very badly, punishing herself with freestyle street dance, and studying the Dark Side of the Force. Although happily settled in the historical town of Colchester in the UK with her husband of 21 years and three little monsters, she continues to roam the rest of the Universe in her head.
Pippa Jay is a dedicated member of the Science Fiction Romance Brigade, blogging at Spacefreighters Lounge, Adventures in Scifi, and Romancing the Genres. Her works include YA and adult stories crossing a multitude of subgenres from scifi to the paranormal and often with romance, and she’s one of eight authors included in a science fiction romance anthology—Tales from the SFR Brigade. She’s also a double SFR Galaxy Award winner, been a finalist in the Heart of Denver RWA Aspen Gold Contest (3rd place), the EPIC eBook awards, and the GCC RWA Silken Sands Star Awards (2nd place).
You can stalk her at her website, or at her blog, but without doubt her favorite place to hang around and chat is on Twitter as @pippajaygreen.