Q & A with Petie McCarty and a Giveaway! 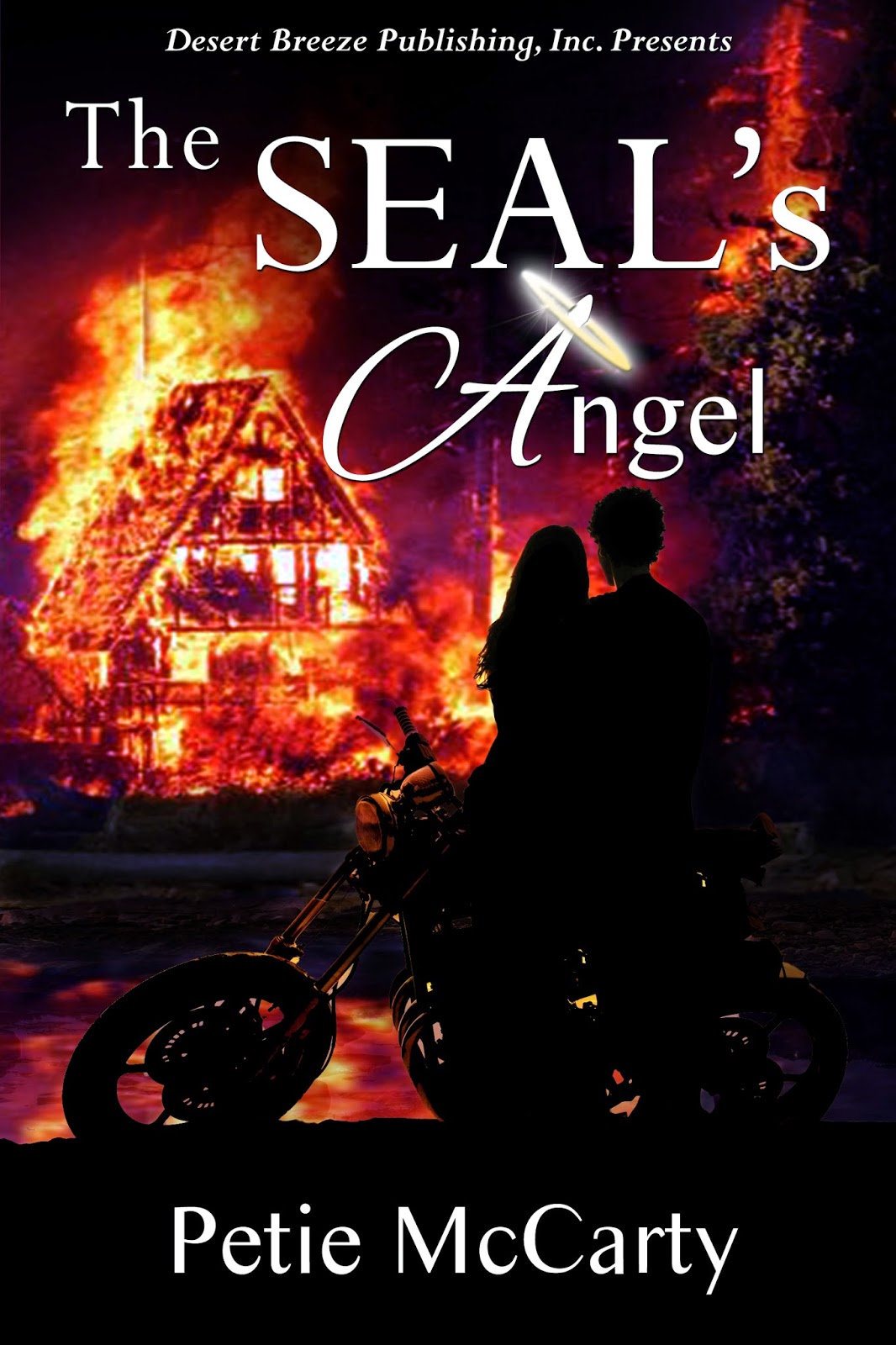 Thanks so much for allowing me to visit Romance Reviews Today to talk about my April 1st release, The SEAL's Angel. This is the third story in my Mystery Angel Romance [MAR] series. Each love story in the series has an angel hidden in the plot, and the angel's identity isn't revealed until the finale -- unless the reader figures it out first.

In The SEAL's Angel, Navy SEAL Sean MacKay's teammate is murdered after stealing a deadly nerve-gas formula from Syrian terrorists. Naval Intelligence believes MacKay's teammate was a traitor and shipped the stolen formula to his sister in the states for safekeeping. MacKay is given orders to find the sister before the terrorists do and to retrieve the stolen formula at all costs.

Foreclosure looms for Cory Rigatero as she fights to keep her rustic resort near Mt. St. Helens afloat after her brother deserted her to join the SEAL teams. Cory's whole world dives into a tailspin when Sean MacKay shows up at her resort with the news of her brother's death and the wild suspicion her brother may have sent her traitorous classified documents. No way will Cory trust MacKay -- the man who once seduced her and then vanished into the night without a trace.

As every author knows, research adds color and authenticity to a story, but when you can get help from an actual expert, you can make your story come alive. I was thrilled to receive help for this story from a friend of mine, a former Lieutenant with the Navy SEALs, who had to answer way too many of my questions and kept me from making any SEAL faux pas in the story. While I wanted to acknowledge him in my new release, like most Navy SEALs, he wished to keep his identity anonymous, so I'm giving him a shout-out and a big thank you here.

Through most of my life, I had never, ever considered writing a book, not in my childhood or college years or later. I always loved to tell stories, but I never wrote them. About a decade ago, I thought about a job change, but had no idea what I wanted to do. Now, I know I'm going to sound like a wack job, but one odd day during that decade back, a movie started running in my head -- first the general plot, then scenes flitting in and out.

I know. I know. Hard to believe. Surprised the dickens out of me, too. Well, the movie pestered me day after day until I finally started speed-writing scene bullets to get them all on paper, and that turned out to be my first book. Oddly enough, all my books have "arrived" that same way -- movies that run in my head, so real that I can see the scene layouts in color with all the characters.  *smile*  And no, I'm really not crazy. Just lucky, maybe.

I don't have any of those unfortunately. I know the best plan for any author is regular office hours, but I can't seem to manage that. I write when the movies are running in my head -- *wink*  see above. The scene writing can run until midnight or start up at five or can occur in the doctor's office waiting room or in a hotel room on vacation. I never travel anywhere without a steno pad. I can't take a chance on missing anything, so I write when the movie runs. Everybody is different, and this works for me, but I can tell you that I write every day, and I'm most at peace when I'm writing.

If you want my writer's quirk, then promise not to snicker. You've heard the phrase, "always has her nose in a book?" That's me. I sniff books. Yes, you heard right. I love the smell of books, especially brand new ones -- hard cover, paperback, doesn't matter. I do have to catch myself when I read in public. *grin*

As far as writing habit, my manuscripts are written in two ways: longhand and shorthand. I tried typing straight into the computer, but I move chunks of prose around too much as I write, and it's easier for me to have the first draft in longhand.

When the story action speeds up and that dreaded movie in my head runs faster, I slip into shorthand to keep up. Yes *eyeroll* the old Gregg shorthand. But, at least I don't miss any of the action. Nothing is worse for an author than seeing that great piece of narrative or slice of dialogue in your mind and then have it disappear -- poof! -- before you  can get it typed.

When you're first published, you're enamored with your accomplishment -- "Wow, I write a whole book, and someone wanted to publish it!" Euphoria sets in and you marvel for a while until the big surprise sneaks up on you when the marketing process begins and you join Amazon Author Central, Goodreads, and all the social media outlets to promote your big accomplishment.

This is where astonishment swoops in to override all else: "Holy cannoli! Everybody else wrote a book, too! How do I make mine stand out among the 253,000 romance eBooks available on Amazon?"

When I first started writing, I buckled to any and all outside writing influences. I subscribed to several writer's magazines and bought dozens of texts on the mechanics of novel writing. Read them all. And subsequently, learned that everyone has a different opinion on what works in a novel. So, who's right? Hard to say -- matter of opinion.  *grin*

For me, the greatest advice was to read -- a lot. So I did. And reading the fiction masters -- an eclectic mix of James Patterson, Michael Connelly, Suzanne Brockman, Jane Anne Krentz, Grisham, and others -- taught me more than all the writing texts combined. That's not to say the texts aren't valuable. They are. But, I learned so much more by studying the techniques of the bestsellers.

The priceless influence comes from the support of family and friends. I have several spectacular friends who kept me going in the years before publication. Rejection hurts and can make a new, or not-so-new author want to quit, but you just have to "author up" and keep going.

My family always tells me they're proud when I have a new release, and there's a whole lot of them. Six brothers and sisters, sixteen nieces and nephew. My sister Katy has been my biggest support therapy from the very beginning. She was the first to find out I was writing novels, and she never, ever let me give up. There were at least a half dozen times I really tried to quit. She'd hound me right back to writing again.

I also have to give a shout-out to my brother-in-law Tom who -- believe it or not -- has read every one of my romance novels. He says, "They're a little girly, but I like them." Is that a great brother-in-law or what?

I love to play golf. I stink at golf, but who cares? My sweetheart loves golf, and believe me, you can get in some great quality time snuggled together in a small golf cart for three or four hours, especially in the winter when it's cold. Did I say I loved golf?

I've started work on a second series: The Cinderella Romances -- fall in love with the fairy tale all over again. Not a true series with returning characters, but a series of love-at-first-sight tales, each with a different Cinderella and Prince Charming.

The first story -- Cinderella Busted -- is complete. The romantic fairy tale moves to present-day Jupiter Island, Florida where a beautiful gardener is mistaken for a wealthy socialite by a billionaire resort developer. Anxious for one fabulous date with her handsome prince, the gardener cultivates her inadvertent masquerade. Love at first sight controls their mutual attraction, and feelings run deep before her deception is inevitably discovered. This story is presently under review for publication.

My present WIP is something completely different, a regency time-travel romance. In Duke Du Jour, the fourteenth Duke of Reston falls into a fountain in an overgrown section of his ancestral estate and wakes up in regency England in 1816 where he is mistaken for his namesake and great-great-and-so-on grandfather, the seventh Duke of Reston, who has been missing since the battle of Waterloo. I haven't had this much fun writing a story since Catch of the Day.

Thank you for allowing me to spend time on Romance Reviews Today. Readers can check out the first two chapters of each of my books on my website at http://www.petiemccarty.com and also find me at the following social media links:

Petie earned a zoology degree from the University of Central Florida and received many unique assignments during her career as an aquatic biologist, including performing aquatic plant surveys in Florida lakes and streams by every type of floatable craft - including airboats. She even spent a few years collecting and identifying aquatic macroinvertebrates, aka "water bugs."

Petie spent the bulk of her career as a biologist at Walt Disney World,"The Most Magical Place on Earth." She had the fun of working in the land of fairy tales by day and creating her own romantic fairy tales by night. She eventually said good-bye to her wonderful "day" job to write her stories full-time.

She is proud to be a member of the Florida Aquatic Plant Management Society as well as a member of Romance Writers of America and an author with Desert Breeze Publishing Inc.

Petie shares homes in Tennessee and Florida with her horticulturist husband, a spoiled-rotten English springer spaniel addicted to green olives stuffed with pimento, and a talkative Nanday conure named Sassy who makes a cameo appearance in Angel to the Rescue. She loves golf, running, and reads voraciously. That's Petie, not the conure.

Got any questions or comments for Petie? Post them and you'll be entered in a chance for a download copy of her release!

You are a new to me author! I love finding them and their books. This one sounds really good, I will be checking them out and adding to the wish list! Thanks for the chance.

Your books sound like fantastic reads. You will be a new author for me, I look forward to exploring your books.

nice your family supports you