Q & A with Kirsten S. Blacketer! 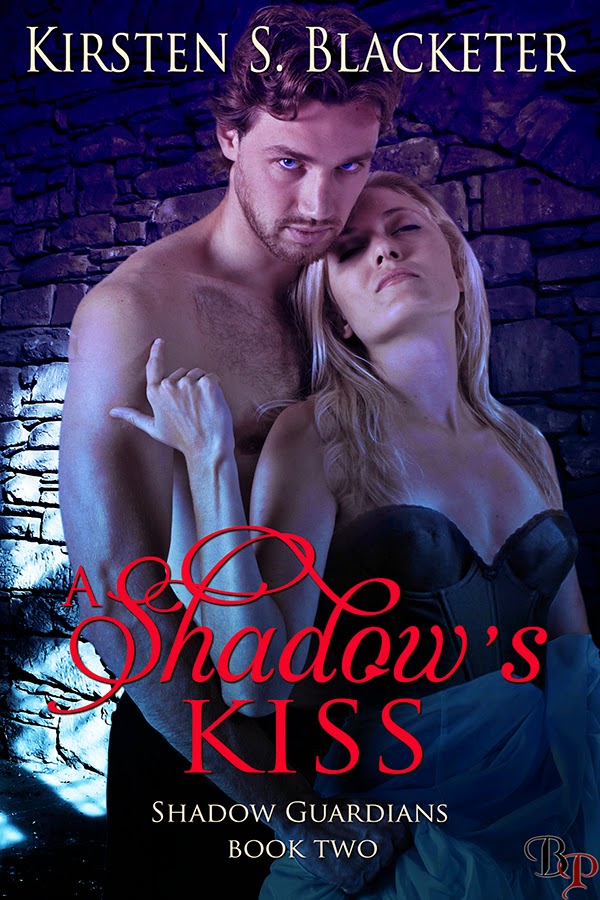 1.  Tell us about your newest release.
My latest release is for the print version of A Shadow's Kiss. It's the story of Madeline and Alexander. I introduced these two characters in the first Shadow Guardian book, An Irresistible Shadow. This follows their journey into Scotland and shows the obstacles each of them must overcome to be together. Being an English knight does not endear Alexander to Madeline's Scottish father, who happens to be the laird of Clan Campbell. If the highland clans discover Alexander isn't the Scottish lowlander he claims to be, it could cost him more than just his life...it could tear him away from woman he loves forever.

2.  What was one of the most surprising things you learned in creating your story?
Whenever I write a historical romance, I always discover something new and exciting because I'm constantly researching the time period. For Alexander's story, I think my research on the highland games was the most interesting. Before the 19th century, the highland games as we know them today did not exist. However, they did have medieval style tournaments complete with sword fights, jousting, and archery. I included a foot race in the novel as part of the highland tournament because it was a common contest during that time period. I always discover some of the oddest things doing research, but it was surprising to me that the highland games as we know them did not exist back then. Makes me wonder where they came from...hmmm, more research perhaps?

3.  Do you have any interesting or quirks or rituals?
I must have two things to write. Coffee and music. It helps keep me focused on my work. I also can't write when my family is home. My husband, bless his heart, thinks that if I'm in my office I can be interrupted any time. With children, interruptions are a given, but with husbands, sometimes they just don't quite get the fact that when I'm in the zone and the words are coming easily, you shouldn't interrupt. *shrugs* This is what coffee shops and libraries are for, right?

4.  What authors or friends influenced you in helping you become a writer?
My friends and family have always been supportive of my writing career. I have some great friends who are also authors, and they are more precious to me than chocolate. (That's saying something, right? I'd die without chocolate.) I don't have a specific author who inspired me or influenced me. I think the romance genre in general pushed me to do that. I think I read 200 romance novels in a year once, and after that I knew I had to write my own. It became the push I needed to finish the story that had been hounding me for years.

5.  What does your family think about your career as a published author?
My family supports my career as a writer, even though most of them don't read romance, or in my husband's case, don't read in general. It's never easy to be a writer. The time spent in front of the computer or scribbling away in a notebook. Nope, we always have a story brewing in our brains. So there are many times where family time gets neglected. I always try to make it up to them later when deadlines aren't looming and edits aren't due the next day. I think it's safe to say that my family is proud of me taking the leap into this career as an author although sometimes I wonder if I'm really a masochist.

6.  Besides writing, what other interests do you have?
I love horseback riding, hiking, photography, riding roller coasters, and being on stage. I volunteer with the local community theatre and also serve as the Cubmaster for my son's Cub Scout Pack. So when I'm not writing, I'm busy with family projects and the arts. We're also a military family, so we travel a lot. Exploring new places has become a hobby the whole family enjoys together.

7.  Can you tell us what is coming up next for you?
I'm currently working on a trilogy of novellas set in the late 1890s in Victorian England. My heroes are quite scandalous being that they moonlight as thieves. Each of the stories will be self-contained in regards to the hero/heroine's romantic relationship, but the overall plot will weave together throughout all three books. Once they're all out in ebook format, I will be publishing them as a single print volume. The inspiration for this series came from a Japanese Otome Game I fell in love with last fall. I adore the bad boys. *wink wink*

I am always online somewhere. These are the easiest places to contact me and keep up to date on any new releases or contests.

Thank you so much for having me. I hope you enjoy my Shadow Guardian Series. *hugs*

Madeline Campbell has been whisked away from her uncle's barony to be reunited with her family in the Scottish Highlands. Her happy reunion quickly sours when she realizes her father intends to present as a bride to the winner of the Highland Tournament. With no one to turn to for comfort or guidance, Madeline chooses to do her duty to her clan as well as her father and marry the winner.
An English knight has no place on Scottish soil, but Alexander must complete the mission with which he was tasked.  Find Madeline and ensure her safety. When he finds her, he must decide between his honorable duty and his love for Madeline.
No one can deny their attraction and their desire for one another, but when it sparks jealousy in the other clansmen, they have no alternative but to run. Secrets emerge from the shadows of the past and threaten to tear their happiness apart. How can one choose between their duty and their heart?

"I am merely a possession to be bartered and traded." She sighed. "Evelyn was right. Tis not fair." She wiggled against him, trying to find a more comfortable seat.
"Madeline," he groaned. "Do not do that."
"What?" she asked innocently, glancing at his face. He had drawn his lower lip between his teeth, his eyes had drifted closed. She released his shirt and touched his unshaven cheek. The rough prickle of new beard scratched her palm.
"Cease your torture, lass," he said, his voice hoarse and breaking.
"Am I hurting you?" she shifted again, bracing her hand on his thigh. His hand tightened, gripping her waist tightly.
"Stop. Moving." He grounded out the words.
"I do not mean to hurt you," she said sympathetic. She truly had no idea what she was doing to cause him pain.
"If you would stop your wiggling," he rasped out.
She pulled away from him in an effort to give him some space. Madeline slipped, nearly tumbling from his arms when he caught her, his palm cradling her breast. She felt the heat of his hand through the fabric of her gown. A knot formed in the pit of her stomach, twisting and pulling, threatening to tear her apart. She gasped, grasping his plaid to steady herself again. As soon as she settled, his hand released her, resuming its grip on her side.
"My apologies, my lady," he said as their mount climbed the hill toward the keep. Madeline could see Angus and Heather ahead of them, but far enough their words were a whisper on the breeze.
"Twas my fault I nearly fell," she said, the heat rising in her cheeks.
"I meant for..." He coughed, unable to finish the sentence.
"Oh, that, well," she stammered, her face enflamed. The darkness hid her embarrassment, but it also emboldened her. "I must admit, I liked it."
Alexander said nothing, but his fingertips digging into her side belied his reaction. She felt daring in the moonlight.
"Did you like it as well?" she whispered, her gaze fixed on his face. He bit his lip again. A familiar tingle shot down her spine, landing in the pit of her stomach.
"My lady, twas naught but an accident," he replied stiffly. "It will not happen again."
She leaned closer to him, curling against his warm body. "Your touch warms me the way strong wine does. Making me feel weak and helpless and happy, all at once. I cannot help but want more." She reached her hand up to caress his face again. "Would you kiss me again, Alexander?"
She felt his breathing quicken. His heart beat louder beneath her cheek, and his jaw twitched beneath her touch. "You want it as much as I do," she said, feeling wicked and wanton. She had wanted him for so long, to have him so close now and not take a chance seemed wrong.
"I do," he whispered so softly she almost missed his confession.
"Then I am yours." Her breath hitched when he glanced at her, his eyes as dark as the skies above them.
"I cannot," he replied, regret evident in his tone.
"You can," she pleaded. Her body ached for his touch, her lips burned for his kiss. For two years she pined for him, forcing herself to be content for the chance of seeing him around the keep. Ever since he kissed her, she knew he wanted her with as much passion as she desired him. Her fingertips journeyed into the soft curls at the nape of his neck, twisting them. "Please, Alexander."

Stick her in the middle of a chaotic home with two children, a hyperactive dog, and a camouflage wearing husband, and she can cook and clean with the best of them.  But when the sun goes down and the children are nestled in bed fast asleep, she tucks away her pots and broom and like Cinderella she transforms.
Her characters creep forth from the dark recesses of her mind taking their places in the castles and forests built from her words. No simpering heroines linger there with forlorn gazes turned to the horizon, waiting for their Prince Charming. They straighten their spine, arming themselves with blade and bow, prepared to do their part in defense of their honor and destiny. She breathes life into the women she believes our ancestors to be, showing how they lived and loved with passion and grace.
Never bored by the tales still left to tell, she battles the ever sarcastic muse in her quest for romance.
at April 14, 2015