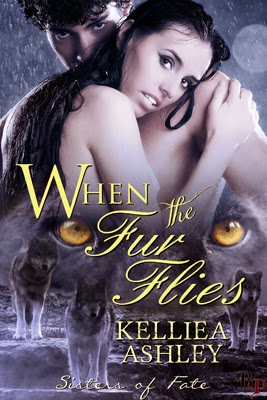 Hello, thanks for having me here on Romance Reviews. When the Fur Flies was my second e-book to be published by Breathless Press. This is the first time it will be in print and I can't wait to hold it in my hands. It is a paranormal romance involving characters with completely different personalities.


When I was creating my characters I learned how hard it is to make them keep a straight line. They tend to wander wherever their hearts desire.


Surprisingly, I don't have any rituals when I write. I'm sporadic with where, when, and how I write. Like my characters, I write when the mood hits me.


My childhood friend, Amy used to share in my love of writing and reading. She really made me feel confident in the stories I created.

My family is very proud of me, but I bet they are silently wondering where I get my ideas. I'm very quiet and blush easily.

I love Pathfinder. For three years my hubby and I host game night once a week an play with friends.I'm a geeky nerd, but I love it.

Along with the print release of When the Fur Flies I have Roots of Love coming out as an e-book. I'm going to finish two more stories and I hope I'll have Holding the Beta, number three in the Sisters of Fate series done by the end of summer.

Allison Carver is a Witch fighting to survive a Vampire Elder's lust for revenge, a High Priest's evil plan, and an Alpha Wolf, whose touch she craves more than air. A cat has only so many lives…

Allison Carver is a Witch on a mission to save humanity from the two species of immortals who prey upon them. She finds herself in deep trouble when she steals the Vampire Elder's intended bride and the blame for the abduction lands right at Alpha Reginald Leclair's feet. A love bite from the big alpha lands Allison in more trouble when she suddenly finds herself mated to him. A Witch accused of abduction, mated to a Wolf, and the focus of a High Priest's revenge, Allison can only pray she has enough cat lives left to get her through.
Wolven Alpha, Reginald Leclair didn't intend on letting his pack members force him to take a mate, but when a sexy Witch stepped into his path for the second time, he couldn't help appreciate the way an awkward teen turned into a siren. His Wolf didn't care that the Witch turned into a Kitten with claws. A Kitten whose innate curiosity and knack for getting into trouble, just might be the straw that broke the Wolf's back.
The Tri-Species Treaty is a set of rules and guidelines regulating the social interactions of the three main species of immortals. Survival of the three depends on keeping peace to co-exist in the shadows of humanity. All possible conflicts were covered with contingency plans to keep order. All but one. The idea of interspecies mating wasn't so much ignored by the writers, but seemed unfathomable. In a world where immortals are bound by the Tri-Species Treaty, there is little hope for a happy ending between a Wolven and a Witch, unless the Sisters of Fate take a stand.

"Where are we going? Reginald?" He didn't as much as look back at her. Her legs hurt as he didn't even slow his steps to accommodate her shorter stride. When they were far from the sounds of the pack readying themselves for the hunt, he stopped to turn toward her. Allison bit her lip nervously as he continued to stare at her. His thoughts were weirdly guarded from her, but she could feel the waves of anger and frustration coming off his body.
"I won't apologize for what I did." She knew it was the wrong thing to say the instant his eyes dilated and he moved. The hard bark of the tree bit into her back and shoulders as he shoved her up against it with a violence that was barely controlled.
"Do you even know what you did, Allison?" The way his white teeth flashed and his voice growled at her should have scared her, but it was the use of her name that terrified her. A shiver ran up her spine as she looked up into the face of rage. "I could change right now. My Wolf wants out. He wants to dominate you so hard you won't ever question me again."
She flinched as his fist hit the tree beside her head. Bark flew off the tree at the impact, telling her exactly how much anger he was holding back. It should have made her want to run as far from his animal as she could get, but instead her body was humming and hot, leaning toward his hardness like it was drawn to him. And it was because the mating heat was returning in full force, stronger than before in the urge to be one with her mate. She needed him, but not like this. Not with his anger standing between them.
"Change, then." She stared up at him defiantly. "Let him have me, because this is who I am, Reginald. I'm strong headed and willful. I won't be a weak little bitch who follows your every word. I make my own choices for my life."
"You are my mate! I can't lose you."
"You don't own me!" she screamed back at him. She clenched her teeth, fighting the need to release the build-up of energy within her. Thunder cracked across the dark sky above them.
"That's where you're wrong, Allison. You are mine!" His mouth came down on hers with a bruising force. He sank his fingers into her hair, holding her head immovable as he ravaged her mouth.
She was burning alive and loving every minute of it. Allison made short work of the buttons on the white shirt he'd pulled on after his fight. One hard pull and they popped off in all directions to land in the scattered clumps of grass and dirt on the forest floor. His head snapped back as her nails dug into his biceps.
"That's right, Alpha. You're not the only one who likes to leave your mark on your property." She dropped her hands to the button on his pants, but he quickly captured her wrists, pulling them up next to her head on the tree.
"Like it rough, do you, mate? Well, you've got the right Wolf for the job." He grinned as he quickly turned her. Allison gasped as she was pushed up against the tree. "Who do you belong to? Who is responsible for you? Who will you obey from now on? Say it, Kitten." His words were at her ear, his breath warm against her neck as he moved her hair with his chin to lick over the mark he'd given her.

Kelliea Ashley lives near the Canadian Border in upstate New York with her husband, a cat named Copperkitty, a dog named Sammy, and several fish, who do not have names and are very lucky her husband feeds them.
Kelliea grew up an only child with a devoted single mother. She looked at books as companions and writing as a favorite escape. She has always been a bookworm who steadfastly refused to give up her paperbacks until her loving hubby bought her a Kindle for Christmas. Secretly she still adores the smell of a well-read book, but sh…don’t tell her husband.
She has a habit in the form of chocolate and loves a glass of sweet red wine. Romance has always been her favorite genre because she sees the miracle and magic in finding ones’ true love. Her first release, Winter Gifts was released on May 10th, 2013 by Breathless Press.
Kelliea can be contacted at:
kellieaashley@AshleyKelliea on Twitter
http://kellieaashley.wordpress.com/ Kelliea's Quips Blog
http://www.facebook.com/kelliea.ashley.5
at April 11, 2015