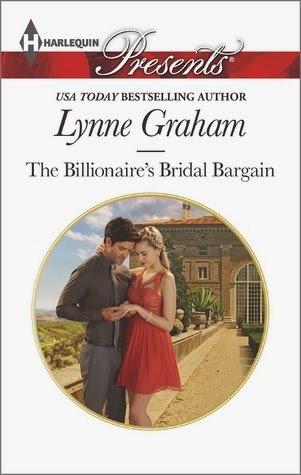 Lizzie Whitaker’s life has little joy as she works from sunup to sundown toiling the land of her family’s farm. Her mother abandoned Lizzie and her younger sister, Chrissie, to their father, who has become cynical about life in general as the farm income has dried up and his health has failed. After their mother’s death, the sisters were left an island in the Mediterranean ocean, but due to restrictions against selling it, they can’t dispose of it and get the money needed for the farm. One day, an Italian billionaire, Cesare Sabatino, shows up and offers Lizzie a way to help her family. However, it involves marrying him and providing him with an heir.

The island Lizzie and her sister own was once part of Cesare’s family, but now he wants it back so he can take his beloved ailing grandmother on one last visit there. The stipulation of the restrictions on the land is that a Sabatino cannot set foot on the property or buy it unless there’s a marriage between his family and Lizzie’s. He offers Lizzie a deal: marry him, get pregnant with his heir, and then he will buy the island so she can pay off the farm’s debts and pay her sister’s way through college. She reluctantly accepts, and he whisks her off to Italy where he provides her with a makeover and a fashionable wardrobe. The transformation of Lizzie has Cesare transfixed. Maybe marrying her won’t be so bad after all.

A marriage of convenience is the only way Cesare can keep his promise to his grandmother for her to visit an island she fondly remembers from her childhood. Back then the island belonged to their family, but after a failed engagement, it was given to Lizzie’s mother’s family as retribution. Lizzie and her sister inherited it upon the death of their mother, but it is useless as it cannot be sold due to some tight wording in the property deed. However, marriage to a Sabatino and providing an heir is one way to get around the clause. Lizzie refuses at first, mainly because Cesare is so out of her world and because after one failed engagement in her past she’d rather be on the farm with her favorite canine as her only companion than a man.

In THE BILLIONAIRE’S BRIDAL BARGAIN, Cesare thought he’d never marry but will do anything for his grandmother, even marry someone he doesn’t love. Underneath the grime of farming, Lizzie appears plain, and though she intrigues him, he doesn’t expect a spectacular marriage and has even lined up a mistress to amuse his time after the wedding ceremony. But the transformation of Lizzie has Cesare finding himself very attracted to her. A few hot kisses and he can’t wait for the wedding night. Can they turn a business relationship into a passionate one?

Against the odds, Cesare and Lizzie discover the passion and desire they thought they would never have in THE BILLIONAIRE’S BRIDAL BARGAIN. For a compelling romance of opposites attracting, grab a copy of this sizzling tale today.