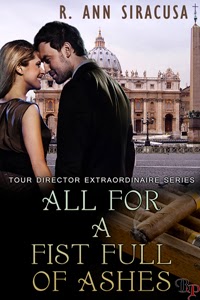 Blurb – All For A Fist Full of Ashes

A fast-paced romp through Italy with tour director, Harriet Ruby, and handsome spy, Will Talbot, in hot pursuit of a lost grave and an assassin.

I’m Harriet Ruby: Tour Director Extraordinaire.  At least, I thought I was worthy of that title, until…

My first mistake: Agreeing to conduct a private tour of Italy. Fourteen Italian-Americans from New Jersey? All family, for three weeks, with four teenagers? What was I thinking? Fate responds to my engraved invitation by placing one of the family under surveillance as a suspect in an assassination plot, and who is assigned to the case?  None other than my favorite drop-dead-gorgeous spy, Will Talbot.

My second mistake: Allowing Will to coax an invitation from the family matriarch to join the tour.

And that was just the beginning. The matriarch, searching for the unknown location of her mother's grave so she can bury her brother’s cremated ashes (which have been smuggled into Italy wrapped in Cuban cigars), and her quirky family members sweep through Italy leaving chaos, hilarity, and danger in their wake.


I’m a California girl who earned her Bachelor of Architecture degree from UC Berkeley, then went immediately to Rome, Italy. On my first day there, I met an Italian policeman at the Fountain of Love, and the rest is history. Instead of a degree from the University of Rome, I got a husband, and we’ve been married going on fifty years. In Rome, I worked for as an architect and planner for a land development company for several years until we moved to the United States. I’m now retired from a 35+ year career in architecture and urban land use planning, and spend my time travelling the world and writing. I love to hear from my readers.