Anne has worked for her sexy, ex-surfer, businessman boss for seven years, and she’s been in love with him for two. Jake doesn’t think about her as anything but his ever-efficient assistant, though. She’s been trying to get over her feelings by dating other men and interviewing for other jobs—which doesn’t make Jake very happy. But Anne is determined not to put her life on hold for him.

When she gets a new job offer, Jake will do anything he can to keep her, but he still only seems to want her as an employee. Anne might find him irresistible, but she’s learned to resist. There are lines that he’ll just never cross. 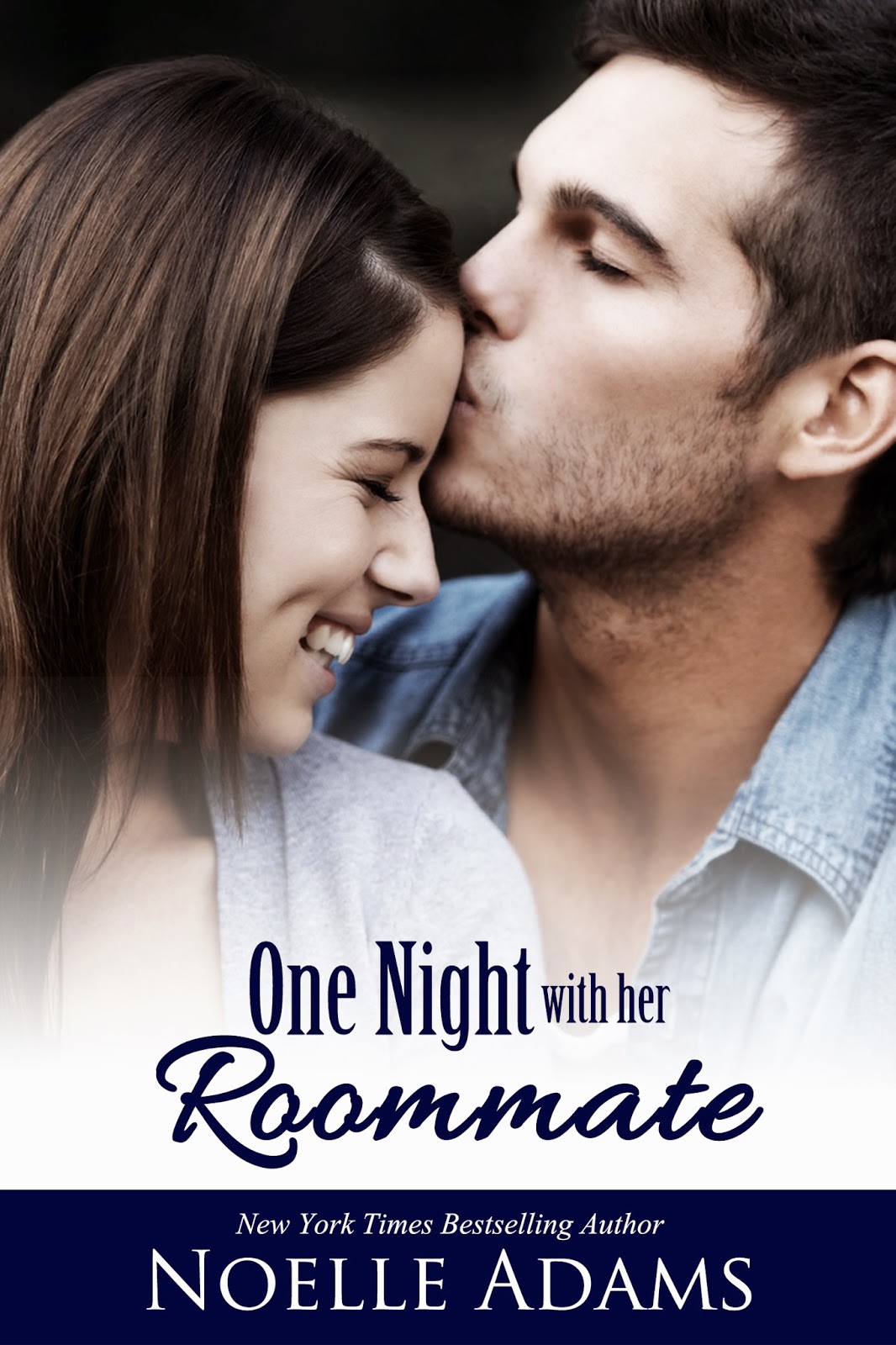 Ever since her former roommates deserted her, Meg has had to share an apartment with a lazy, obnoxious ass. He won’t pick up after himself, and he refuses to get a good job. Plus, he doesn’t always wear enough clothes—which is really a problem, because he’s hot.

Maybe he’s occasionally funny. And every now and then he can be sweet. But mostly he’s just annoying. It doesn’t matter how much he’s starting to flirt with her—Meg is going to resist. She’s way too smart to fall for a guy who never takes anything seriously.

Raney wants to enjoy being a bridesmaid at her friend’s wedding, but the best man, Justin Woodward, keeps putting a damper on her mood. He’s brilliant and kind of geeky—not at all the kind of guy she’s used to—but she’s always been nice to him, so she can’t figure out why he acts so cool and obnoxious with her.

It shouldn’t matter what he feels about her, but she can’t stop thinking about him. So her mission for the weekend is to get Justin to like her. Her attempts don’t seem to work at all.

One Night with her Boss:

She leaned down to open the correct drawer and rifled through files quickly until she found the right one.
Jake had followed her over, and she could feel him bristling behind her as she turned around to hand him the file.
He stared down at it. “Why aren’t the receipts in the February drawer?”
“Because the receipts are all over here. If you would let me keep the records electronically, we wouldn’t have this argument every other week.”
“Do you really think I’m going to trust the last ten years of my life to a computer? You’ve got to be crazy. I could lose everything with a key stroke.”
He’d always been kind of a Luddite. A lot of the time she found it adorable.
Not today.
It bothered her unreasonably that he evidently thought the last ten years of his life were only about building this company. As if he was nothing but his work.
She cleared her throat. “Keeping paper records means you could lose everything to a fire.”
“The cabinets are fire proof.”
She shook her head. “Fine. It’s your business. Your files. You can keep ancient paper records if you want. But you aren’t allowed in here. If you want something, ask me.”
He stepped a little closer and braced his arm on the cabinet next to her shoulder. “Who’s the boss here anyway?”
She could tell his mood had changed. He wasn’t angry. He was still bristling, but also almost dryly amused. The transformation of his expression left her breathless, as did his proximity.
Her eyes were right at his chin level, so she had to tilt her head up to meet his eyes. “I’m not trying to be the boss.”
His mouth twitched almost imperceptibly. “You’re pretty bossy, to not be trying to be the boss.”
She swallowed hard, clenching her fists to keep herself from putting her hands on his chest. When he was like this—clever, dry, focused on her—she always seemed to want him the most. “Well, I’m the boss of this room. You’re the boss of everything else.”
“Is that how it works?” He braced his other hand on the cabinet, trapping her between his arms.
“Yes.” She was flushed all over and suddenly conscious of the ache of arousal between her thighs. She had no idea when that had happened. “That’s how it works.”
She could see that he was breathing quickly too, and he looked as hot as she felt. Something new had blazed up in his eyes, and for a moment she was sure he would kiss her.
But he didn’t.
Of course, he didn’t.
She was his assistant. Not his girlfriend.
“Okay then,” he muttered, dropping his arms and stepping back.
“Okay.” She was almost shaking, her body primed and ready for something to happen. When clearly nothing was going to happen.

One Night with her Roommate:

“What’s the matter?” East asked in a different tone. He was still studying her face, and he seemed to see a lot more than he should, despite his lazy insouciance.
“Nothing,” she snapped, annoyed mostly at herself for being bothered so much at the thought of moving out. Her eyes dipped down again to discover that he was a little more erect than he’d been before. In response to the hot flash she felt, she added, “Would you mind putting that thing away?” She waved in the general direction of his groin, carefully keeping her gaze from settling there again.
He glanced down, as if surprised. Then he gave her a hot grin. “Where would you like me to put it?”
“Put it behind a towel or something.”
“And have a little respect. He’s not an ‘it’, you know.”
She had to choke back a laugh at his exaggeratedly aggrieved tone. “It’s a ‘he,’ is it? Does he have a name?”
“Of course.” East glanced down at himself and then back up to her face. “His name is South.”
There was no way Meg could hide the ripple of laughter at this ironic tone. She could see that East was smiling, as if he was pleased he’d amused her so much.
“Well, would you please put South away? Normal people don’t parade around naked, you know.”
“You’re the one who barged in here.” He was still smiling, but he wrapped his towel around his waist, hiding the part in question.
“And I don’t even want to know what you were doing in here on your own with a hard-on.” To hide her embarrassment as it hit home that she was with East naked, she made her voice even dryer than normal.
He chuckled again. “I was thinking about you, of course. And then you came in wearing nothing but my t-shirt and messy hair, looking like a wet dream, so it’s like my fantasies came to life.”

One Night with the Best Man:

“It’s a wedding,” she said. “I have my bridesmaid dress and my dress for tonight and something for tomorrow morning and something for Sunday—plus shoes and all the other stuff I need to get ready. Did you expect me to fit it all in my purse?”
Justin seemed to be hiding a smile now—and it made him surprisingly attractive. His mobile mouth, finely drawn features, and intelligent eyes seemed to convey a lot more than was actually reflected on his face. “Of course not. Didn’t I just say I knew you’d bring a lot?”
She huffed and was about to snap at him for being patronizing when she remembered her mission to get him to like her this weekend. So she made herself smile instead. “Well, I guess you were right.”
He looked briefly surprised, but she kept smiling at him as he closed the trunk.
He was peering at her as they got back in the car. “Is everything all right?” he asked.
“Of course,” she said, beaming at him. “Why wouldn’t it be?”
“I don’t know. Something seems strange.”
“Nothing is strange. We better get going, since we’re already running late. Thanks so much for picking me up.”
“Sure. Any time.” He was still observing her in quick looks as he started the car. “I’m surprised you don’t have a boyfriend to pick you up.”
Yet again, it sounded like he was judging her and finding her wanting. “Why are you surprised by that?”
“You seem like the kind of girl who would always have a boyfriend.”
The truth was she normally did have a boyfriend. She’d have one relationship after another. Each one, she thought would work out up until the moment it apart—either when the guy lost interest or when Raney discovered he just wasn’t what she’d thought. She was constantly getting crushed by how her romantic dreams weren’t coming true.
But there was no reason for Justin to know that.
“Well, I don’t always have a boyfriend. I could have gotten a date, but it would be awkward since I’ll be busy with bridesmaid stuff. I see you don’t have a girlfriend to bring either.”
“No, I don’t have a girlfriend.”
For some reason, she was glad to hear that. It put them more on an equal playing field. But remembering she hadn’t been particularly nice so far, she added, “Well, I’m sure you could get one if you wanted.”
“Is that a joke?”
She blinked. “No. Of course, it’s not a joke. Why would you assume it’s a joke?”
He peered at her again and didn’t say anything.
Be nice. Be nice. Be extra nice.
“Thanks again for picking me up,” she said.
He frowned, looking both surprised and displeased. “You don’t have to thank me again.”
“Well, I appreciate it. You had to go out of your way, and it would have been a real pain for me if I’d had to find another way to get there.” She smiled at him. Usually, her smile was enough to disarm anyone’s bad mood. She’d always been able to get people to return it, even if they were in a bad mood.
But Justin just frowned even deeper. Glancing over from the road, he scanned her face. “Why are you acting that way?”
“What way?”
“I don’t know. Did you take something before I picked you up?”
She gave a little gasp and stopped smiling.
Her mission this weekend was going to be harder than she thought. 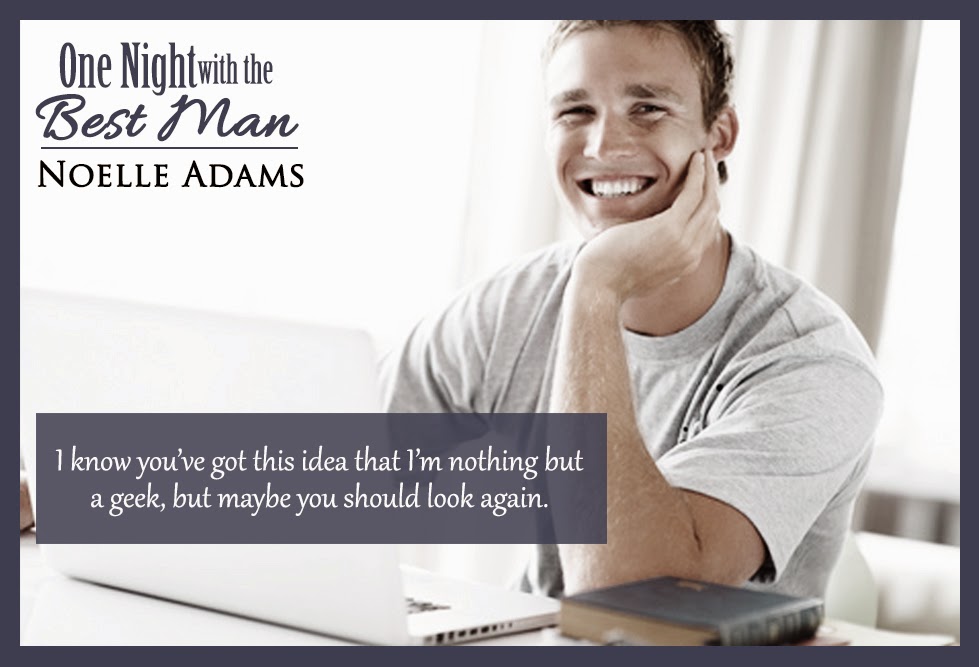 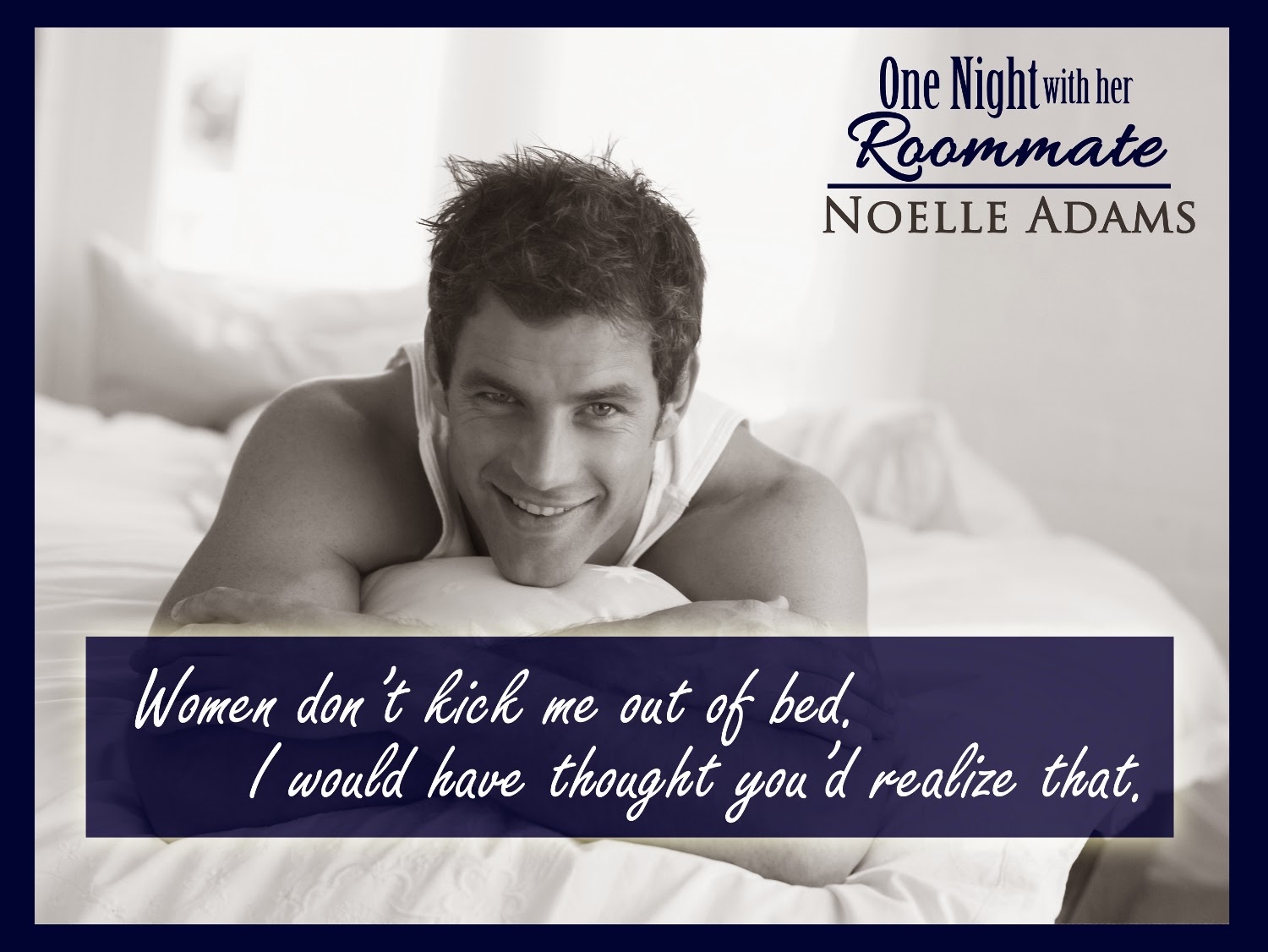 Noelle handwrote her first romance novel in a spiral-bound notebook when she was twelve, and she hasn’t stopped writing since. She has lived in eight different states and currently resides in Virginia, where she teaches English, reads any book she can get her hands on, and offers tribute to a very spoiled cocker spaniel.