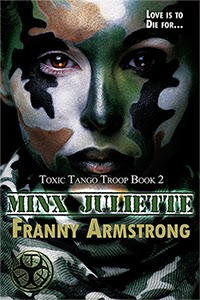 Certainly! Minx Juliette is book two in the Toxic Tango Troop series. Julie is a hardened soldier and first officer to Tab (Toxic) McTavish, of an elite team of undercover soldiers. She's feisty, bad assed, a smart-mouthed woman who doesn't put up with anything from the villains. I like her so much! She's a woman on a mission, who never gives up. She doesn't need anyone to save her, but she appreciates the help from the hero.

Lope (Wolf)is a rebel, who lost his wife and child to a group of crooked cops. He wants revenge, but plays the game, acting like a drunk. He's searching for his kidnapped son, who has a strong psychic ability that is in high demand. The drug lord uses him for his supernatural skills.

With both Julie and Wolf having their own psychic abilities, together, they can be deadly.

I do a lot of research when I write. I learned a lot about Mexico, as well as the rainforest. Sometimes I can actually envision myself living in that environment.

Chocolate! I tend to lean toward sweets when I write. A nice glass of wine is good too. As for other rituals, I turn the TV off, sitting in silence while my muses take control. It's a ritual, though a boring one for most people.

I read almost every book author Christine Feehan wrote. She inspired me to write about psychics. Her tales are filled with a fast pace, exciting characters, and plots that won't let you put the books down until you've read every word. I want mine to be just like that.

They love it. My husband says, 'Missouri'. When I asked him what he meant, he said, 'It means, show me the money!'. lol My mother is the only family member who reads my books. My daughter said she's afraid to know what goes on in my mind. What can I say?

I do stained glass, I'm an artist, I knit, sew, and do a number of other crafty things. My favorite pastime is reading, of course.

When Minx Juliette comes out on March 17th in PRINT, I will continue to finish book 3, BLAQUE RUSSIAN. It's so exciting, that I can't wait to finish it.

I'd love to hear from my readers. Let me know what you think of the stories!

Thanks for having me on your blog. I appreciate it.

Franny Armstrong is a mother of three and a grandmother of four. Her husband supports her imagination and has the patience of a saint. She’s been writing since she was a child, creating plays to act out in front of the neighborhood children. She charged them five cents admission to join her in the family garage for the play.
Since 2002, after a serious breakdown, Franny had to express herself on the computer since she couldn’t speak, everything coming out gibberish at that time. She’s slowly healed to the point that she can function fairly well. Writing was the best medicine for her and still is.
Franny loves to write about rainforests and Caribbean islands rather than about cities. Her characters are well rounded and share her wacky sense of humor.
Franny Armstrong