Promo Spotlight on... M.J. Rose's THE WITCH OF PAINTED SORROWS 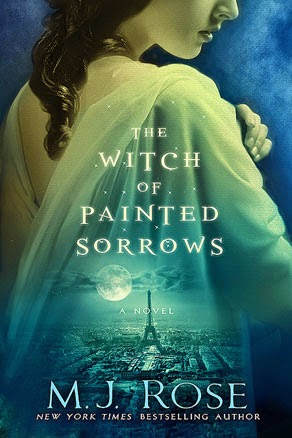 New York socialite Sandrine Salome flees an abusive husband for her grandmother's Paris mansion, but what she finds there is even more menacing. The house, famous for its lavish art collection and elegant salons, is closed and under renovation. Her grandmother insists it's too dangerous to visit but Sandrine defies her — an unexplainable force is drawing her home.

There she meets Julien Duplessi, a mesmerizing architect, who introduces her to the City of Lights — its art world, forbidden occult underground, nightclubs — and to her own untapped desires.

Then more ominous influences threaten — her husband is tracking her down and something insidious is taking hold, changing Sandrine, altering her. She's overcome by the spirit of La Lune, a witch, a legendary sixteenth-century courtesan, and an unsung artist in her own right, who exposes Sandrine to a darkness that could be a gift or a curse.

This is Sandrine's "wild night of the soul," her odyssey in the magnificent city of Paris, of art, love and witchery, and not until she resolves a tragic love story and family curse will she be free of the ghost's possession.

Effortlessly absorbing and richly imagined, with sumptuous detail and spellbinding suspense, The Witch of Painted Sorrows conjures the brilliance and intrigue of Belle Époque Paris and illuminates the fine line between explosive passion, and complete ruination.

Paris, France April 1894
I did not cause the madness, the deaths, or the rest of the tragedies any more than I painted the paintings. I had help, her help. Or perhaps I should say she forced her help on me. And so this story—which began with me fleeing my home in order to escape my husband and might very well end tomorrow, in a duel, in the Bois de Boulogne at dawn—is as much hers as mine. Or in fact more hers than mine. For she is the fountainhead. The fascination. She is La Lune. Woman of moon dreams, of legends and of nightmares. Who took me from the light and into the darkness. Who imprisoned me and set me free.
Or is it the other way around?
“Your questions,” my father always said to me, “will be your saving grace. A curious mind is the most important attribute any man or woman can possess. Now if you can just temper your impulsiveness . . .”
If I had a curious mind, I’d inherited it from him. And he’d nurtured it. Philippe Salome was on the board of New York City’s Metropolitan Museum of Art and helped found the American Museum of Natural History, whose cornerstone was laid on my fifth birthday.
I remember sitting atop my father’s shoulders that day, watching the groundbreaking ceremony and thinking the whole celebration was for me. He called it “our museum,” didn’t he? And for much of my life I thought it actually did belong to us, along with our man- sion on Fifth Avenue and our summerhouse in Newport. Until it was gone, I understood so little about wealth and the price you pay for it. But isn’t that always the way?
Our museum’s vast halls and endless exhibit rooms fascinated me as much as they did my father—which pleased him, I could tell. We’d meander through exhibits, my small hand in his large one, and he’d keep me spellbound with stories about items on display. I’d ask for more, always just one more, and he’d laugh and tease: “My Sandrine, does your capacity for stories know no bounds?”
But it pleased him, and he’d always tell me another.
I especially loved the stories he told me about the gems and fate and destiny always ending them by saying: “You will make your own fate, Sandrine, I’m sure of it.”
Was my father right? Do we make our own destiny? I think back now to the stepping-stones that I’ve walked to reach this moment in time.
Were the incidents of my making? Or were they my fate?
The most difficult steps I took were after certain people died. No deaths were caused by me, but at the same time, none would have occurred were it not for me.
So many deaths. The first was on the morning of my fifteenth birthday, when I saw a boy beaten and tragically die because of our harmless kisses. The next was the night almost ten years later, when I heard the prelude to my father’s death and learned the truth about Benjamin, my husband. And then there were more. Each was an end-ing that, ironically, became a new beginning for me.
The one thing I am now sure of is that if there is such a thing as destiny, it is a result of our passion, be that for money, power, or love. Passion, for better or worse. It can keep a soul alive even if all that survives is a shimmering. I’ve even seen it. I’ve been bathed in it. I’ve been changed by it.