Promo Spotlight on THE FALL by Christie Meierz 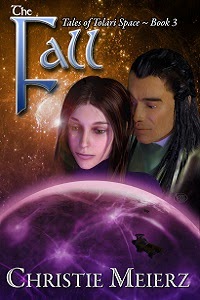 
As bitter enemies scheme against each other with the fate of Tolar in the balance, Laura Howard, made a powerful empath by the Jorann's gift, loses everything—again. Now she must recover and find her place, and herself, while fighting against the ghosts of her past and the expectations of everyone around her.
Loss after tragic loss shakes the Paran to his very soul. With his allies vying for control of the planet and his own province caught in the middle, he must risk his life as well as that of the woman he loves to take the one action he never thought he would: fight for leadership of the ruling caste.
Purchase a copy
Excerpt from The Fall by Christie Meierz

No one had mentioned bonding’s drawbacks to Laura. When the Paran told her, she got up from the divan to stare into the gray gloom of the garden. The full moon hung low in the sky; they had talked most of the night.
“They die together?” she asked.
“Very often,” he replied. He joined her at the window, snaking his hands around her waist to pull her back against him. She fit perfectly under his chin. “The shock of the bond rupture itself can kill a sensitive.”
“No wonder some of you prefer not to bond.” She covered his hands with her own. “So, I wouldn’t survive losing you, but you might survive losing me.”
“Not happily, but yes, I might.”
An image flitted across her mind of John turning to dust before her eyes. “Not an experience I would wish on anyone,” she murmured.
“We might live to become ancients and walk into the dark together in each other’s arms. Would you prevent such a joy by avoiding all risk?”
She sucked her lower lip between her teeth. “Would you?” she asked out the side of her mouth.
“No.”
“Well, that’s a fair answer.”
He chuckled and kissed her hair.
“And to think I used to believe all you Tolari were cold and emotionless.”
“You cannot ever have thought that of me.”
“Oh no, I knew better by the time I met you.” She pivoted in his arms to face him. “But we all thought it, up on the Alexander. Tolari don’t have feelings, not like humans do. I still believed it when I landed.”
The Paran snorted.
“I’ve seen enough human feelings for one lifetime. When Marianne took me in—when the Sural rescued me from that horrible man—” She shuddered at the memory of the cold-eyed Central Command operative who would have murdered her and abducted Marianne, if the Sural, ruthless savage that he was, hadn’t killed the man first. With his bare hands. She shuddered again and buried her face in the Paran’s robe. Maybe Tolari rulers were more violent than she wanted to believe.
The Paran rested his chin in her hair, heart open, and his love settled around her, warm and comforting. She stood on the threshold of a commitment the likes of which she’d never imagined. At that thought, her heart leapt into her throat. Seize the day, her late husband would have said, though he would have said it with Latin words she could never remember. Carp… Carpie… something. She took the Paran’s face in her hands and searched his deep, dark eyes. His lips curved upward. He curled long fingers around her hands, placing a gentle kiss in each palm before pulling them away from his face to fold them over his heart.
“Laura Johnson Howard,” he said. “Will you bond with me?”

Award-winning writer Christie Meierz writes space opera and science fiction romance set in a civilization of empaths on the edge of a dystopic Earth empire. Her published works include her bestselling debut novel, The Marann, and its sequel, Daughters of Suralia, and two prequel short stories published in Into Tolari Space ~ The First Contact Stories.


Christie has spent a night and/or eaten a meal in all 50 U.S. states, plus Puerto Rico and the U.S. Virgin Islands. Currently, she lives in Pittsburgh, Pennsylvania with her mathematician husband and an assortment of stuffies. When she’s not writing, she writes about writing on her blog, Meierz Musings (christiemeierz.blogspot.com), and Facebook (facebook/christie.meierz and facebook/tolarispace), where she welcomes comments and friend requests.