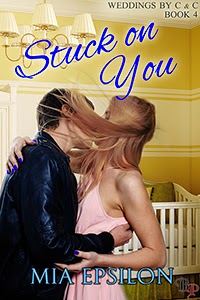 1.  Tell us about your newest release.
Stuck on You tells what happens after 'happily ever after'. Anna and Robin from Wedding Belle Blues are happily married and settled into domestic life with twins. Then two life changing events shake up their quiet life, changing them forever.

2.  What was one of the most surprising things you learned in creating your story?
I had to research post pregnancy recovery and also giving birth to twins. I've birthed four children but never two at a time! there's a whole different dynamic to being pregnant with and giving birth to multiples.

3.  Do you have any interesting or quirks or rituals?
Oh lord, I have way too many to name. I have to have water at hand when I write. There must be some sort of white noise in the background, music or television. But when I edit, it must be absolutely quiet. I also never submit anything on the day thirteen.

4.  What authors or friends influenced you in helping you become a writer?
Nora Roberts influenced me as a beginning writer, because her stories are always so emotional and true to life. She's also an amazing lady to meet in person.

Right now, my former editor and friend Jen Bradlee influences me most by pointing out what I need to cut from the story and what I need to keep. She's ruthless and absolutely right (just never tell her I said that) with her editing comments.

My current editor Jenn Harrington makes me see past the 'action' to the emotion of the characters. She's been a God send in helping me create 'live' people every reader can identify with and hopefully, grow to love.

5.  What does your family think about your career as a published author?
My daughter thinks it's "ult cool". My sons scoff about me writing romance and claim they don't read it…then ask me questions about the story to prove they have indeed read it. My Hubby also writes, though in sci-fi, and is extremely supportive and patient.

6.  Besides writing, what other interests do you have?
I'm an endless reader. I adore books. Drop me in a bookstore with a café and I could happily live there. Some women by clothes, make up or jewelry. I binge spent on books, lots and lots of books.

7.  Can you tell us what is coming up next for you?
I just submitted Book 5 of the Weddings by C & C series to my editor and am busy at work editing Book 6, and trying my hardest to control my drama diva heroine.

Once you marry True Love, then what?

Robin and Anna are back. The wedding is over, they are happily married, and living in Anna's beloved hometown. Plus they have the blessed new challenge of twins. Sure, each has annoying bad habits, they're seriously sleep deprived, and a few cracks have appeared in their unblemished marriage. After all, this is the real world not a fairy tale. Nothing will destroy this idiotic existence.
Then Robin is offered the promotion of his career. It's perfect except it means a big move away from their family, friends, and home. With neither willing to budge on the issue, the first major fight of their marriage shakes it to its foundations.
Then a tragic accident changes everything. Can this couple find their way back to each other and stay Stuck on You?

The smell of chili filled the air and eased his irritation. Mmm, he did love that slow cooker homemade stuff Anna made. Had she created the old family recipe of cornbread as well? Robin sniffed the air with a growing sense of hope and anticipation, but smelled only tomatoes and peppers. "Anna?"
Robby's wails increased in volume. Funny, I know exactly which twin it is. Robin gave a small chuckle as the father love surged through him and replaced the irritation. He dropped his bag and the application folder on the oak kitchen table and rushed toward the den. Robby lay on his back on a fluffy blanket on the floor. His little face had turned deep red from his cries. His arms and legs pumped the air with fury clad in small jeans and T-shirt proclaiming, "If You Think I'm Cute You Should See My Twin." River lay nearby on her tummy, similarly clad but calm. Her small hand grasped a corner of the blanket and tugged as if she wanted to pull it over her head and drown out her brother. Her face lifted to stare at him as he ran into the room. Robin would have sworn she rolled her eyes as if to say, Yeah, it's him again. Can you please make him stop? He's disturbing my peace.
"Anna?" Robin gathered Robby up into his arms and patted River's tiny back. "Shh, it's all right. Daddy's here." Okay, Robby desperately needed a change. Whew, the smell! As his arm slipped around to hold his son more securely, Robin felt the wetness from a soaking diaper seep into his shirt. Robby hiccupped and continued to sob. His small body shuddered as if he'd been crying so long he couldn't cease. Robin felt an identical wetness as his hand drifted lower on River and the dark stain beneath her body.
"Anna!" Icy cold fingers of rising panic trailed up and down Robin's spine. Something wasn't right. Anna would never, ever leave the twins soaked or alone for so long. She jumped to respond to their needs the minute one of them uttered a distressed sound. Robin continued to try to soothe his son as his gaze searched the room for some sign of what might be happening. The phone lay on the table beside the twins. Piles of laundry were stacked in neat rows on the sofa. A half empty bottle of water sat on the floor. Nothing unusual or out of the ordinary.
Except Anna wasn't there. She hadn't answered the phone. Plus the twins, her pride and joy, had been left without her care. "Anna!"
Where was she? His heart nearly burst from his chest. His skin chilled. Panting breath ripped at his lungs and throat. He jerked to his feet and startled Robby who began to cry in earnest again. "Anna!"
"Anna!" Robby continued to wail though thankfully River had stopped and now gazed at him with an expression of patient tolerance. Heart pounding like the fastest speed on his motorcycle, Robin tried to remain composed for the sake of the twins. He climbed the stairs to the bedrooms, each lift of his foot like trudging through thick, dragging mud. He murmured a soothing sound to Robby as his screams echoed off the walls and mirrored Robin's own ever rising fear twisting his stomach and souring his throat. "Anna?"
At the top of the stairs, his gaze darted around the small space. His heart, his breath, his mind simply halted as his whole body shook.


BIO:
Mia Epsilon lives with her ever patient and tolerant soul mate hubby in the gorgeous Blue Ridge Appalachian Mountains of North Carolina, USA. She's an avid reader of almost anything but particularly romance with too many favorite authors to name. Mia is a huge Doctor Who fan and adores the new Doctor with his Scottish accent. She also happily suffers a chocolate addiction which causes her to visit her favorite chocolate store, The Chocolate Fetish an abnormally high number of times.
Mia can most often be found at her computer spinning new tales or in a quiet padded nook (a nook, she swears, not a padded room) with her e reader engrossed in a new story. She's currently hard at work on her series 'Weddings by C & C' and trying to build its reputation from 'just another wedding story' to 'OMG you have GOT to read this book!' She appreciates all reader input and comments on her Face Book, Twitter, Amazon and Good Reads pages. Her released titles include: 'Wedding Belle Blues', 'Take a Chance on Me', 'When You Believe', 'That Night', 'Stuck on You' along with a short story in The Wonderland Tales 'Leave Your Hat On'.
CONNECT WITH:
Blog: Authors, Books & Chocolate: The True ABC's of Life  miaepsilon.blogspot.com
Face Book: MiaEwrites (Mia Epsilon Author)
Twitter: Mia Epsilon @MiaEpsilon
Breathless Press home page: www.breathlesspress.com: Mia Epsilon
http://www.breathlesspress.com/index.php?main_page=product_free_shipping_info&cPath=15&products_id=582&zenid=21617d34fb685eb3713c0c23496255b3
Amazon: Amazon.com/author/miaepsilon: http://www.amazon.com/Mia-Epsilon/e/B00DQ61FRM
Good Reads: Mia Epsilon https://www.goodreads.com/user/show/14292463-mia-epsilon
Bookstrand: http://www.bookstrand.com/mia-epsilon
All Romance ebooks: https://www.allromanceebooks.com/storeSearch.html
Shelfari: http://www.shelfari.com  (search Mia Epsilon)
at February 13, 2015