Promo and Q&A with Vivian Probst! 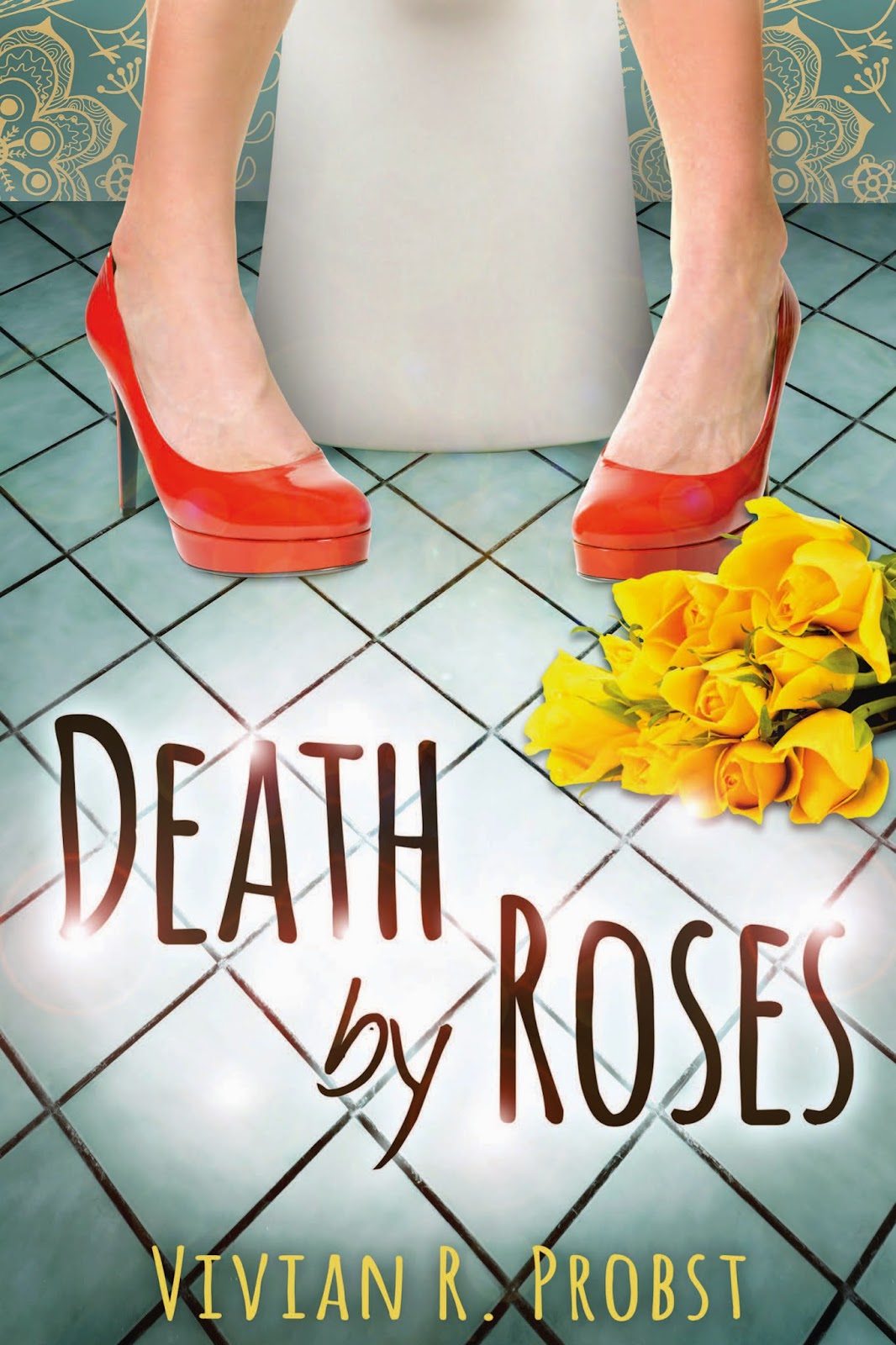 1. What inspired you to write Death By Roses?

It had something to do with my older sister's death from Lou Gehrig's disease, which had occurred six months before the story began.  I had grown up deeply introverted with an intense fear of death that never relented until I wrote this story.  Somehow, I think my sister's passing started this story, as if she was telling me to relax, enjoy my life, and not take death so seriously. My older sister had always watched out for me. Perhaps, even now, from her heightened perspective, she knew how to help.

2. Mae Rose's pride and joy is her antique VW Beetle. Are you a fan of antique cars? What are your top three favorite models?

I am not a fan of antique cars-furniture, yes; cars no. I want maximum protection like airbags; navigation that tells me where I am and how to get where I'm going; full warranties, and many windows. A chauffeur would also be nice.

Our family, however, spent a lot of time inside VW Beetles as I grew up.  As a child in a family of six people, riding around the country in a VW Beetle was NOT my idea of a good time.  But the affection for VWs was prevalent and in tribute to my sister, who eventually owned a yellow VW Beetle, I couldn't help but include one in the story. I didn't understand the important role the VW would play until the story developed.

3. Mary Lee Broadmoor, the screenwriter known as Scary Mary, interacts with her daughter in the complete opposite way that Mae Rose treats her own children. Do you think that Mary Lee has any regrets in how she treated her daughter Allie?

Mary Lee has masked any possible regrets inside her caustic personality.  Years of brutality toward her daughter and massive doses of narcissism make regret virtually impossible until Mae Rose's energy "moves in." My guess is that Mary Lee's upbringing was pretty brutal and that her self-absorption was longstanding. After Mae Rose begins to notice Allie and admire her, Mary Lee appears to soften.  But I don't believe she is able to face her regret until she passes into her next life and has an opportunity to explore her attitude toward her daughter.


4. What was the biggest challenge while writing Death By Roses?

Keeping up with the story. Once it started, DBR wanted to take over my time in a more aggressive way than I could handle in time/space reality. I own my own national consulting business and life kept giving me this amazing work to do in the affordable housing industry so I could not always just "give in and write." But I got the time I needed over the course of the five years that the story developed. I also believe that life knew I was not ready to be a published author back then-I had a lot of growing to do. So life took care of me during this entire time until the story was complete. But it was hard sometimes to share my life between my work, my writing, and my family. I'm still writing and facing that challenge but it helps to know that this story is complete and making its way in the world.

Vivian Probst (born Ruth Theobald) was raised in a small Midwestern town until the age of thirteen when her parents dedicated their lives to religious work. At the age of fourteen, she was convinced that she would be given stories to write but it would be thirty-four years before those stories began.

In the meantime, Vivian (Ruth) followed in her parents’ footsteps and was trained in the studies of culture, anthropology, and linguistics, graduating from a private religious institution in 1977 with a degree in multicultural ministries. After a brief and deeply unhappy time of missionary service, she gave up everything she knew in order to find life outside the restrictive philosophy in which she had been raised.

Completely unprepared for the emotional or financial whiplash of becoming an outcast from the only life she had ever known, Vivian(Ruth) lived in poverty until she was rescued by The Women’s Center in Waukesha, Wisconsin. An opportunity to work at a minimum wage job in real estate property management eventually led her to a career as a national consultant and trainer to the affordable-housing indus­try. And during this time a wonderful second marriage occurred.

On March 10, 2000, the stories Vivian had long ago been told about began to appear—first as dreams, then as remarkable events that materialized into characters and plots as she wrote—without any formal training in writing or any preplanned concept or outline.

Vivian’s first published novel, Death by Roses, began after her older sister died of Lou Gehrig’s disease in 2008. She worked through her grief for five years as she wrote her novel. She then submitted her manuscript to the When Words Count Retreat’s literary competition (whenwordscountretreat.com/pitch-week) and as the first place winner won the prize of having her book published by SelectBooks, Inc.

Vivian and her husband live in Waukesha, Wisconsin, surrounded by their children, step-children, and the most amazing eleven grand­children on planet Earth (or so Vivian claims). She is happily at work, as there are more stories begging to be written.


Excerpt from
DEATH BY ROSES
By Vivian R. Probst

If Mae Rose McElroy had known that by evening she would be dead à la commode after a fit of rage at her husband, she might have made different choices. Of course, if she’d done things differently, she might not have died while sitting on the toilet.
But on that frosty March morning, as she stood by the kitchen window washing breakfast dishes, Mae Rose was preoccupied with the effects of the last night’s storm. Everything glistened in sparkling crystal coats of ice that most would have found beautiful. As she anxiously surveyed the backyard trees, the barn, and the gardens and fields of their farm home, Mae Rose was far from feeling awestruck.
This was because today—of all days—her husband would be driving her meticulously restored 1974 VW Beetle to the mechanic shop where she worked. “Please be very careful, Art,” she said without looking up from the sink, “the roads could be very slippery.”
After thirty years of marriage, Art understood the meaning of Mae Rose’s words. They meant she didn’t trust him and was worrying about her precious car. Her fretting did not dissuade Art from feeling an uncharacteristic joy.
Mae Rose could tell from the noises in the background that he was indeed ecstatic. The hangers clanged merrily as he removed his coat from the closet. Even the zipper sang with an abnormal enthusiasm as he closed his jacket against the cold.
“You know I’ll be careful,” Art replied, planting a dutiful kiss on his wife’s stern cheek. Earlier, while shaving, he had practiced saying “I love you” to Mae Rose. Although her obvious unhappiness made him decide not to attempt it now, nothing—not even his irritation with her remarks—could suppress his buoyant feelings of hope.
It was rare for Art to drive Mae Rose’s car. But once his new client at the shop saw the car’s spectacular restoration, he was certain the man would confirm his intention to pay the large expense of having his own antique Beetle refurbished. And Art hoped for much more—surely his impressive sale would help to renew Mae Rose’s faith in him and their marriage.
Three decades of marriage to Mae Rose had left deep creases across his forehead. Each crease could have been labeled: the upper line for shock at Mae Rose’s intensity, the middle for his resistance to her relentless drive, and the lower for the wavering boundary where Art tried to keep his identity from being discarded as irrelevant.
As he squeezed his tall frame into her car, he put the keys into the ignition and waited patiently for the engine to turn over. It was understandably reluctant, but as if it knew how important the day was, the engine gave in to Art’s persistence. He headed down the long gravel drive, turning left on the two-lane country road with caution.
As the sun melted the icy coating on the asphalt, Art was able to relax and enjoy his drive. Everything glistened in the soft, feathery frost—so breathtaking that Art considered it the best possible omen for a successful day. He couldn’t help that his right hand caressed the leather upholstery he had so lovingly used to recover the seats of Mae Rose’s car; he felt pride, perhaps even a mild flirtation, as he touched the dashboard and turned the radio dial to his favorite oldies rock ‘n’ roll station.
He’d have to remember to turn it back to Mae Rose’s country music station later, but just now he needed to mark his territory. Art loved nothing more than working on old VWs, the only car, he claimed, that possessed a personality all its own, and the possibility of working on another old VW Beetle gave him an unfamiliar sense of exhilaration.
“I’d hammer ‘bout justice!” Peter, Paul, and Mary sang, and Art joined in: “I’d hammer ‘bout freedom! I’d hammer ‘bout the love between,” and Art, who loved to change the words of a song to suit himself, sang, “A man and a Beetle, all over this land!”
As Art brought Mae Rose’s car to an obedient stop at the four-way before proceeding into town, he downshifted through each gear, listening for the purr of pleasure as one cog slid into the next. But today the car growled low and mean as if to remind Art to drive straight through town instead of turning right, as he often had years ago for a cup of coffee and some fornication with Maggie Whitman. Back then, he felt justified in doing this because of Mae Rose’s increasingly insufferable nagging and her proportionately deflated interest in sex.
A trip through Fairview included passing Good Shepherd Presbyterian Church, a cornerstone of the McElroy’s lives. It housed times of great joy: when Art and Mae Rose had married and when they had baptized their son Art Jr., and eight years later, their son John. It radiated with the beauty of Mae Rose at the piano and organ, and more often than not, a flower arrangement she had created adorning the altar. But the church also held their deepest pain in its stone structure as the wounds of Art’s affair had been exposed in quiet confidence to Pastor Frank. The hope of a happy marriage had faded into an ever-sensitive, tender scar.