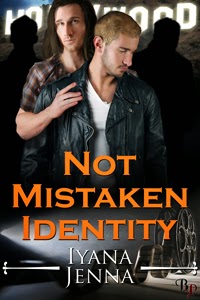 Hi! Thank you, Romance Reviews, for having me Today. ;) My new release, Not Mistaken Identity, is a story about an actor who gets kidnapped because the kidnapper wants to see for himself how the actor acts and suffers like the character he plays on a TV show.

That I could be that mean to my characters. Wait. That’s not true. *evil laughs* Well, no, I don’t think there were surprising things at that time.

Well, I write more smoothly when I do it into my cell phone. I wonder if it’s interesting. ;)

Not as much as I remember. I first wrote something because I wanted to read something that no one seemed to write it.

I think they are quite excited. I always share with them when my stories get accepted or when I get new covers. They are also always happy when I tell them about the ranks my stories get.

Reading and watching TV shows or movies. I’m just boring like that.

I will have a story out from another publishing company. It’s about a guitarist who falls in love with a pianist but the latter doesn’t take that seriously.

Here are some links where you and the readers can connect with me. I always love to hear from everybody!

Author Bio:
Iyana writes M/M short stories and novellas. Her works have been published by Evernight Publishing, JMS Books, Books to Go Now, Torquere Press, Bitten Press, Leap of Faith Publishing, Breathless Press, and Alfie Dog Fiction.
Iyana lives in Jakarta, a city famous for its traffic jams, a lot of cars and motorcycles, and people selling stuff on the roads. You can spend two hours on the road going to a place you can reach in half an hour in a normal situation. Thanks to the traffic jams, though, Iyana can come up with a lot of stories, mostly shorties, as she prefers to spend the time during her trips writing into her cell phone rather than sleeping.

Another thing Iyana loves is kitties. Right now she has three of them. Their names are Cil, Horus, and Betsy, and one kitten. When she doesn’t write, she plays with them, or they would play with her when she writes.

Actor Chase Riley is road tripping his way home when he is abducted. A delusional fan is convinced that Chase is really Elliot, the character he plays in a popular cop series. In order to survive, Chase must channel all his TV character's smarts, while trying to convince his abductor that he really is just a very good actor.

Chase's boyfriend, co-star Aidan Buffett, is on a trip with his sister when he gets news of Chase's disappearance. Trapped in an airport in Mexico trying to get home, Aidan is both terrified he will never see Chase again and tortured with guilt for allowing his lover to travel alone.

When Chase makes a desperate attempt to escape, the consequences are serious. And though Aidan will get to see his Chase again, it is with no guarantee that his boyfriend will survive to tell the tale.

This wasn't the first time Chase had stopped at this place. The food wasn't bad and, besides, he was famished. He hadn't eaten anything since dinner last night and had only coffee this morning.
"I'll take today's special and the grilled chicken and garlic."
"Right away, sir."
There weren't many customers. Chase swept a glance around the room from his bar stool. The quieter, the better. He really didn't want anyone to recognize him.
"You look familiar."
Great. So much for not being recognized.
Chase turned slowly sideways. A man, fiftyish, had taken the stool right next to him. Chase automatically pulled back.
"You got the wrong man."
"I don't think so." The man grinned widely. "Riley, right? Chase Riley, the actor? I'm Bob Nelson." He seized Chase's hand and shook it hard.
Chase offered a half-hearted smile. Who is this man? A journalist?
"My son is a big fan of your show."
Ah. Chase smiled.
"He worships Elliot Smith. He thinks he’s a real hero."
Elliot Smith was the character he played on a TV show.
"Yeah, I think so too," Chase said carefully.
"He tries to do whatever Elliot does, but it frustrates him sometimes when he can't. He wants Elliot to be there with him, to show him the ropes."
Chase paused. This didn't sound right.
And when his food came, Chase could only look at it, his appetite slipping away.
"Uh, you mind if I ask this to be wrapped?" he asked, somewhat hesitant, but the waiter was a truly nice man.
"Definitely not a problem."
Chase nodded, and he grimaced toward the old man.
"That's awesome that your son enjoys our series. We really appreciate your support." Chase didn't want to think that it might look embarrassing that he then dashed to the cashier. He wasn't afraid of the man. No, he wasn't.
Chase was relieved that his order was ready to go by the time he'd finished paying. He hurried across the parking lot toward his car and tossed the food onto the passenger seat. Only when he sank into his seat behind the wheel did Chase take a deep breath of relief. He closed his eyes.
Chase, you're pathetic, he scolded himself. No wonder Aidan keeps worrying about you.
Chase glanced in the rear-view mirror as he put on his sunglasses, tensing when suddenly he saw a movement behind him. Before he had a chance to look again, something sharp thrust into his side through layers of his shirt and jacket.
"Not a word, no sudden movement. I don't want to harm you but—"
"You have a knife!" Chase said.
"No talking!"
The man shoved the knife deeper and Chase breathed hard as he felt it pierce his skin. His ears were ringing as he tried to make sense of what was happening.
"Drive," urged the man.
Chase tried to catch a glimpse of him in the mirror, but the guy was crouching low behind his seat.
"No—"
"Go!"