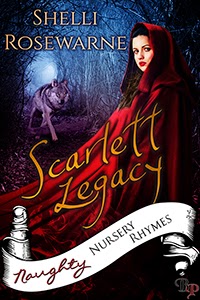 My new release, Scarlett Legacy, is a paranormal romance, with a bit of a Red Riding Hood inspiration behind it. I've always loved fairy tales and it was great fun to be able to do my own take on a story I've loved since I was a child. Though, trust me, this is definitely not a kid's story anymore!

I really love the characters in this story and they have constantly been surprising me throughout. Some of their banter had me laughing out loud, while some of their sex scenes - well, let's say cold showers may have been needed! While Damian has quickly become one of my favourite heroes, he has also been one of the most frustrating ones. He takes strong and silent to a whole other level, and dragging his thoughts and emotions out of him has been a hard slough at times. I also had no idea on this one how it was going to end until I was right there, and they definitely threw me a few curveballs!

I don't think I really do. That makes me sound very boring. Perhaps I should start some? I could only write facing due north, wearing my pyjamas and with a large whisky - being in Scotland and all :) In all honesty though, I tend to need to fit my writing around other things, so it's whenever and wherever I get the chance.

I don't think I could say any one in particular. I've always loved reading, it was my escape and my relaxation. While I was hugely inspired by the authors and books I loved then in an odd way I was also intimidated by them, as I thought how could I ever produce anything that good. Now I just try and tell myself that while it may never be, no one else can write your stories - we can all offer something unique.

They have been extremely supportive. When my first book came out, my dad would go up to random strangers in the street who had kindles out and give them a link to my book :) Poor guys didn't know what hit them!

Like most writers, I love reading. I'm also in photography, as well as being a bit of a geek - love chilling out with video games, movies or graphic novels.

Well, Scarlett Legacy is the first in a new series for me, so I'm just starting on books two and three, which will be running along a similar timeline so I haven't entirely decided in which order they'll be coming out yet. We'll see which characters start shouting at me loudest!


What if the fairy tales were not only real, but had it all wrong? Come meet a Big Bad Wolf like you've never seen before.

Who’s afraid of the Big Bad Wolf?
When Natalia rents a holiday cottage she is looking for peace and quiet. A place to reassess her life and recover from her failed relationship. Instead, she finds a man who turns her world upside down.
However, people and things are not as they seem, and Natalia begins to discover that legends are real and fairy tales have a basis in reality. As she grows closer to the enigmatic Damian, she finds herself tested as danger and passion go in hand in hand, and everything she thought she knew about the world will be questioned.
After years of waiting Damian had given up hope that he would ever meet his destined mate, and he certainly never expected her to be a sassy American who had no idea that his world even existed. Can he convince Natalia to believe in the impossible, and more importantly, can he protect her from those who seek to destroy his people?


Natalia eyed the shining water with fresh appreciation. She had to admit it would be nice to do something to take her mind away from all the crap.
"I didn't bring a suit," she murmured, a bit regretfully.
His grin turned wicked. "You don't need one. There's no one around."
She glared at him. "You're around!"
"I won't look." His eyes were teasing.
Yeah, right! She snorted. "I don't believe you!"
"Okay, how about this. I may look, but I promise I won't touch. Unless you ask me to, of course."
Natalia burst out laughing, surprising herself. Ten minutes ago, she'd been sobbing her eyes out.
His gaze softened. "Come on, you could do with it."
The water did look calm, she thought as she eyed it up. "You're sure it's safe for swimming?"
"Sure, I used to come here as a kid."
She shot him a quick glance at that. It was hard to imagine him as an innocent child. He grinned back at her as though he knew exactly what she thinking—which, quite frankly, shouldn't surprise her after today, but she wasn't going to go there right now.
"Look, if you're that bothered leave your underwear on. It's such a warm day you'll dry out afterward."
Really, it wasn't much different than a bikini, was it? She found herself nodding before she thought better of it and he reached a hand down to tug her to her feet. A half smile tugged at her lips. It might be a bit old-fashioned, but she liked the little gestures he made like that. Then he pulled his shirt over his head and she stopped breathing.
His body was like something out of a magazine, or like the Greek statues at the museums she'd been to for tedious fundraisers. Bronzed skin covered sculpted muscles with a dusting of hair leading down into his pants—which, oh Christ, were coming off as well! She closed her eyes a moment, and then couldn't help herself and had to peek. So much for wondering whether he was going to keep on his underwear as he wasn't wearing any. He seemed completely comfortable in his nakedness, and when he bent over to neatly place his clothes on the rock she had to clench her hands to restrain from reaching out to that tight ass. Jeez, you could market that! He turned back to meet her gaze and her cheeks flamed at the knowing amusement in his eyes. Before her fuddled brain could even start to think of something to say, he leaned forward and brushed a quick, hard kiss across her lips.
"Don't worry. You have the exact same effect on me," he whispered to her and then stepped back.
"See you in there," he told her with a grin, before turning and jumping off the rock straight into the shining water.

Shelli Rosewarne had always had a dream in the back of her head about wanting to be a writer. However, like with so many things, life and paying the bills got in the way and she worked in various jobs from call centers, to shops, to offices. She eventually realized that life is too short not to try and follow your dreams, and has since had two stand alone novellas published with Breathless Press, along with several submissions in anthologies, and various works in progress in the pipeline. Yup, she's having to pinch herself as well! She's currently lucky enough to live in Edinburgh, where she can be constantly inspired by Scottish folklore and see castles every day. When not writing she loves reading, music and photography.