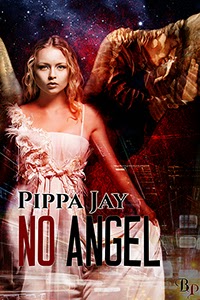 No Angel is a futuristic urban fantasy short with a sexy, conflicted incubus and the lost angel he’s sent to find.

How far would you fall for love?

Centuries ago, guardian angel Lucien committed a terrible sin. He gave into his own desires and revealed himself to the mortal woman he'd been charged to protect. By kissing her, he condemned himself. Torn of his wings and his angelic powers, thrown down into the City Below, Lucien now serves Satan as an incubus who claims souls for his master from the City Above, and who feeds on the energy stolen from his mortal lovers. Dark, sexy and charming, he's been top of his league for decades uncounted.

Until His Infernal Highness decides to send Lucien looking for a lost angel. Lucien has no idea what he did to deserve such a punishment, and the touch of an angel could destroy him. Yet the challenge and the potential kudos of seducing one of his former heavenly kin leads him on.

But when he finds the angel, he learns he still has more to lose than his already forsaken soul.

That I have some very strange ideas about Hell and who Satan might be. I also used a body part word that I’d shied away from so far, but it fitted the style and content of the scene. ;)

I don’t know that anyone would describe them as interesting. I have a thing about numbers, so I like to have matching, round or even numbers for things like reviews or likes. I won’t even get out of bed or do anything without my glasses on - I hate not being able to see properly. I don’t like to step on cracks in the pavement.

Oh, the list is waaaay too long to mention! My top author influences just now are Neal Asher, Jaine Fenn, and Isaac Marion.

They’ve finally stopped calling me crazy and consider it fairly cool, especially my kids because their teachers take interest in it.

Watching and reading scifi, sewing (particularly making cosplay outfits), drawing, creating graphics and mock covers for my books, dancing to keep fit, and I have a pet leopard gecko and five bantam chickens to care for.

I’m working on edits to re-release my debut novel, the rights for which reverted to me earlier in the year. I also have a YA dystopian romance releasing in April 2015.

A new burning consumed his body. He wanted to reach out and hold her. Wrap his arms around her, and drown in her kiss. But even as he took one shaky step toward her, the light and goodness within her scorched him and he staggered back a step, one arm thrown up to shield himself.
"Lucien." Her voice washed over him like a sweetly scented summer breeze. He dared to drop his arm and look at her again.
"Miranda." Her name came out as a growl, and he cursed himself for it.
Her frown deepened. "Lucien, what's happened to you?" She took a step closer and he shied away. No matter how she'd come to him, welcomed him, her angelic powers could still be deadly. "Oh, my love, what have you become?"
My love. The words cut him as deeply as the priest's forgiveness. The pain stirred his resentment. She had been the cause of his fall. The reason for his torment. And now she was scolding him for it?
"What I am is what you helped turn me in to." He raised his head, glared at her. "What I am is because of you."
She shook her head. "Is that really what you think? That it's all my fault?" Tears glimmered in her eyes. "I've watched you for a long time now. Waiting for the right time to come to you. I've seen how your existence has come to trouble you more in the last decades. How the tasks set to you have crushed what remains of your soul."
Lucien snorted. "My soul? I lost that with my heart. And my wings."
"No. You didn't. You hate what you do. You sealed your heart in stone to protect yourself, but you can't bring yourself to fully give into the darkness, no matter what."
Lucien shuddered. "You're wrong."
"You know I'm not." She took another step toward him, and though he tried to back away he found himself trapped against the brick wall. She put up her hand, palm outward, as if to touch him. His breath stalled in his chest and his whole body might just as well have become stone. He couldn't move. 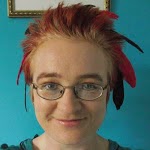 After spending twelve years working as an Analytical Chemist in a Metals and Minerals laboratory, Pippa Jay is now a stay-at-home mum who writes scifi and the supernatural. Somewhere along the way a touch of romance crept into her work and refused to leave. In between torturing her plethora of characters, she spends the odd free moment playing guitar very badly, punishing herself with freestyle street dance, and studying the Dark Side of the Force. Although happily settled in the historical town of Colchester in the UK with her husband of 21 years and three little monsters, she continues to roam the rest of the Universe in her head.

Pippa Jay is a dedicated member of the Science Fiction Romance Brigade, blogging at Spacefreighters Lounge, Adventures in Scifi, and Romancing the Genres. Her works include YA and adult stories crossing a multitude of subgenres from scifi to the paranormal, often with romance, and she’s one of eight authors included in a science fiction romance anthology—Tales from the SFR Brigade. She’s also a double SFR Galaxy Award winner, been a finalist in the Heart of Denver RWA Aspen Gold Contest (3rd place), and the GCC RWA Silken Sands Star Awards (2nd place).

You can stalk her at her website, or at her blog, but without doubt her favorite place to hang around and chat is on Twitter as @pippajaygreen.
You can also find her on Facebook, Pinterest, Google+, and Wattpad

Thanks for hosting me.