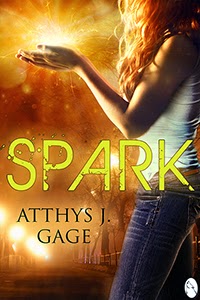 It's called a YA title called Spark, a frolicsome romantic teen comedy about the end of the world as we know it.  All right, I'll be honest: it does feature a ridiculously charming teen romance and it has a lot of funny moments, but mostly it's about what happens when a fleck of sentient, self-aware stardust befriends a 15-year-old high school girl. The world as we know it may or may not be ending, but that's pretty much always the way high school feels, right?

PURCHASE A COPY OF THIS BOOK

Most important lesson:  when some character you thought was just going to be a walk-on extra grabs the spotlight and starts stealing all the best lines, get out of her way!

Generally, I write everything out in a series of spiral bound notebooks before editing the second draft directly into the word processor. In this way, I can work while waiting for mechanics and doctors and eyeglass repair people. And kids. I spend an ungodly amount of time waiting for my kids.

I pretty much kept the whole writing thing a secret, at least until I had finished my first book. I needed to see if I could actually write a whole book before I told anybody I was even trying. My influences are far too many to start naming here, but among current writers, Ann Patchett and Markus Zuzak quietly knock my socks off. Polly Horvath is great, too.

They've been great. I'm inexplicably fond of them. They especially like the "published" part, but they were always supportive, even when writing was just a convoluted, Rube Goldberg pipe dream.

I like strong coffee, black and white movies and ancient rural blues recordings, but I'll dabble in almost anything. Basically, there is no end to the number of things I'll use to distract myself from cleaning the chicken coop and balancing the checkbook.

I've recently written a paranormal thriller called Whisper Blue, about a man who invents an internet ghost, only to have it come to life. I discovered after writing it that I had inadvertently created a sort of mirror image version of Mary Shelley' Frankenstein.

I'm on Facebook at https://www.facebook.com/atthys.gage and Twitter at https://twitter.com/AtthysGage and doing some guest-blogging. I shouldn't be too hard to find.

People are dying downtown, their bodies shriveled away to almost nothing. The police are mystified and outrageous rumors are flying. Fifteen year-old Francy Macmillan listens, but says nothing. It isn't a comfort knowing that no matter how far-fetched the theories, the truth is even stranger.
For Francy, the truth wasn't very hard to find. It followed her home from basketball practice one night, a floating bauble of light that speaks inside her mind and shares her thoughts and her feelings. Is it an alien wanderer fallen from some distant star? Or a shard of some divine entity? Whatever it is, Spark seems to like her.
But as their friendship grows, a disturbing fact emerges: Spark knows who is responsible for those deaths. With Spark's help, it is up to Francy to stop them. Spark leads Francy into a strange alternate reality, along with her friends: beautiful Echo with the dragon tattoo; moody Brooke with the wicked jaw; and Owen Owens, the boy with the fascinating eyes who may just get around to kissing her one of these days—assuming the world doesn't end first.

Snap! The air cracked like a cap pistol. Something bright flew across the room.
I wheeled around with my hand still full of hair.
"What the…?"
It flared orange—then red—a bright floating fleck of light. I watched it swirl, slowly stirring the air, rising like an ember from a campfire.
Fire!
I dropped my hairbrush. My hair was on fire! I grabbed my head with both hands, pawing through my hair. "No, no, no...!"
But I couldn't feel anything burning. I checked in the mirror. Nope. Not on fire. Not even a little.
I turned around again. The fleck hovered at eye-level now. It wasn't orange any more. It was blue. I leaned in a little closer. It blinked white, then blue again.
"Okay, this is..."
But really, I couldn't think of a word that fit. I circled it in slow, careful steps. It stayed still, dangling in the air. I reached out a finger. The fleck flashed silver and spiraled upward, before settling at eye level again. Reflected in the dresser mirror, a second fleck performed the same maneuver.
"What are you?" My voice quavered a little. I wasn't scared—not exactly—but I could feel my heart beating pretty fast. I leaned in closer.
"What were you doing in my hair?" It made a tight vertical loop, pulsing green, blue, then green again.
"Why are you doing that?" I don't know why I kept asking it questions like I thought it could answer. I guess I was really talking to myself. I pushed my lips out and blew, just gently. The fleck flickered in the tiny draft, but it didn't blow away. If anything, it drew a little closer. I had the sudden impulse to run downstairs and get a jar from the kitchen and see if I could catch it, but I didn't do that. Instead, I put my hand out. The fleck danced in until it was barely an inch above my open palm. I braced myself and watched it settle into my hand. It was cool and tiny on my skin.
"Hey," I whispered. "What are you?"
It glowed and I heard a sound, low and metallic: bonk.
"Was that you?"
There was a chirp, and then a low warbling hoot like when you blow air over the top of a bottle. None of these sounds came in through my ears. They were just there, sounding inside my head.
Again, it went bonk. That seemed to be its favorite. A click, a whistle, a little wooden pop. Far-off thunder rumbled. Quiet at first, it rose up inside me, getting bigger and louder. The sound swooped up into a squeal, then dropped even faster to a sub-woofer grumble and faded to silence.
"Is this supposed to mean something?"
It made a soft chugging noise, like a little toy train. The whole time, the thing just sat there glowing in my palm.
"I don't think we're getting anywhere."
It rose into the air until it hung just a few inches from my nose. I stared. It glowed blue, flashed silver, then paled to dull violet.
"It's okay," I said, and this time I was totally talking to myself. "This isn't really happening. It's a dream. I'm dreaming. A dream about a little fleck of light that floats around, making strange noises..."
Then, it flared bright crimson and flew straight into my head.

Atthys Gage is a writer and musician with a lifelong love for myth, magic, and books. His second real job was in a bookstore. As was his third, fourth, fifth and sixth. Eventually, he stopped trying to sell books and started writing them. After studying classics at Haverford College, he developed an interest in the ways that ancient stories influence modern story-telling, and has always had a fascination for that cloudy borderline between the normal and the paranormal. He lives on the coast of Northern California with his long-suffering wife, strong-willed children, and several indifferent chickens.