Spotlight on... HORSE OF BELLS by Pelaam! 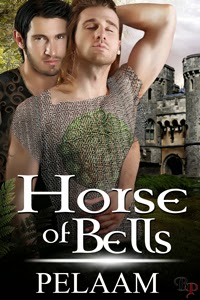 Blurb
A legendary horse, magic, and a man shrouded in mystery. Who can he trust? Caolan risks both his heart and his life to uncover the truth.

When his life is saved by a stranger, Prince Caolan feels an immediate connection to the man, and promises to meet him again. Forced to break that promise to protect his brother Donal, Caolan waits for the day he can return to the forest.
On their trip home, almost a year later, he and Donal are tricked by their step-mother into attempting to steal the legendary Horse of Bells from the infamous Dark Prince Tuathal. Honor-bound to accept the geis she set them, the brothers leave their castle to complete the quest.
During their journey, they meet the enigmatic Traveler. Caolan is confused and troubled by his reaction to the man. Is he a friend, or are his intentions darker and more deadly?

BUY A COPY
Excerpt
The morning came without further event, and Caolan consigned his fear to simple nervousness regarding his brother's challenge. They rebuilt the fire and set some water to boil while they washed at the stream. Laughing together, they returned to their camp and stopped abruptly. A stranger sat at their fire, roasting a couple of skinned rabbits as if he had been expected for breakfast.
Caolan stared at him. He felt as if he should know the man, and yet he knew no one with such unruly sandy-brown hair. The newcomer's beard seemed better maintained; it was but a light coating of slightly redder hair. He couldn't stop his blush as the man's gaze locked with his as if he had been caught. They were the same frigid blue-grey the sea had been the day they had left for the Isles—cold, uninviting, and daunting.
"If I were a spy for the dark prince, I would by now be on my way there, laughing at how two young idiots were going to walk straight into the arms of waiting soldiers the minute they set foot in Prince Tuathal's kingdom. It would probably be the only thing that would save you from his wrath, to know that you sat and openly discussed an attempt to steal the Horse of Bells."
"Then you are clearly not a spy." Caolan observed.
"Bravo. You have a modicum of brains to offset your beauty," the stranger retorted.
The words, cold as the look in the man's eyes, would normally have made Caolan bristle with anger. However he found himself inexplicably wishing the stranger was less hostile toward him.
"What do you want?" Donal asked. Caolan recognized the brusque, assertive tones as his brother sought to take control of the situation.
"I would travel with you. These are lonely and dangerous parts. I gain company and you gain someone well-versed in the treacherous swampland through which you must pass."The stranger spoke as if his offer was the most natural thing in the world.
"I cannot believe you would do so out of generosity." Caolan felt unable to resist the jibe.
"That surprises me not," the stranger countered. "Perhaps our hearts are alike. For payment..." He paused as if considering what would be suitable, yet Caolan was certain the man already knew exactly what he wanted. "Payment will be my asking the truth of you on your honor at a time of my own choosing."
Caolan stood and stared with his mouth open but unable to formulate a reply. As if from a distance he heard Donal answer for him.
"It's agreed." Donal winked at him, but Caolan was certain there would be no way of telling a falsehood to this man.
"Good. Then let us break our fast. I already know your names. You may call me Traveler," he said.
With a sinking heart Caolan sat next to Donal and accepted a plate holding a generous piece of roasted rabbit.
While his brother sat and ate his serving with gusto, Caolan's attention was more focused on the man who now sat with his head bowed. He knew he'd never seen Traveler before, and yet there was a familiarity that made Caolan ill at ease. A niggling feeling, that Traveler was more than he seemed, made Caolan's stomach twist into knots. Who are you really, and why do you make me feel I should know you?
Bio
Pelaam lives in clean, green New Zealand. She is a multi-published author of gay male romance and erotica across time and space. When not writing, she indulges in her other passionsof cookery and wine appreciation. She can be found on Facebook, and a full list of her published works are on Lazy Beagle Entertainment.
at November 20, 2014