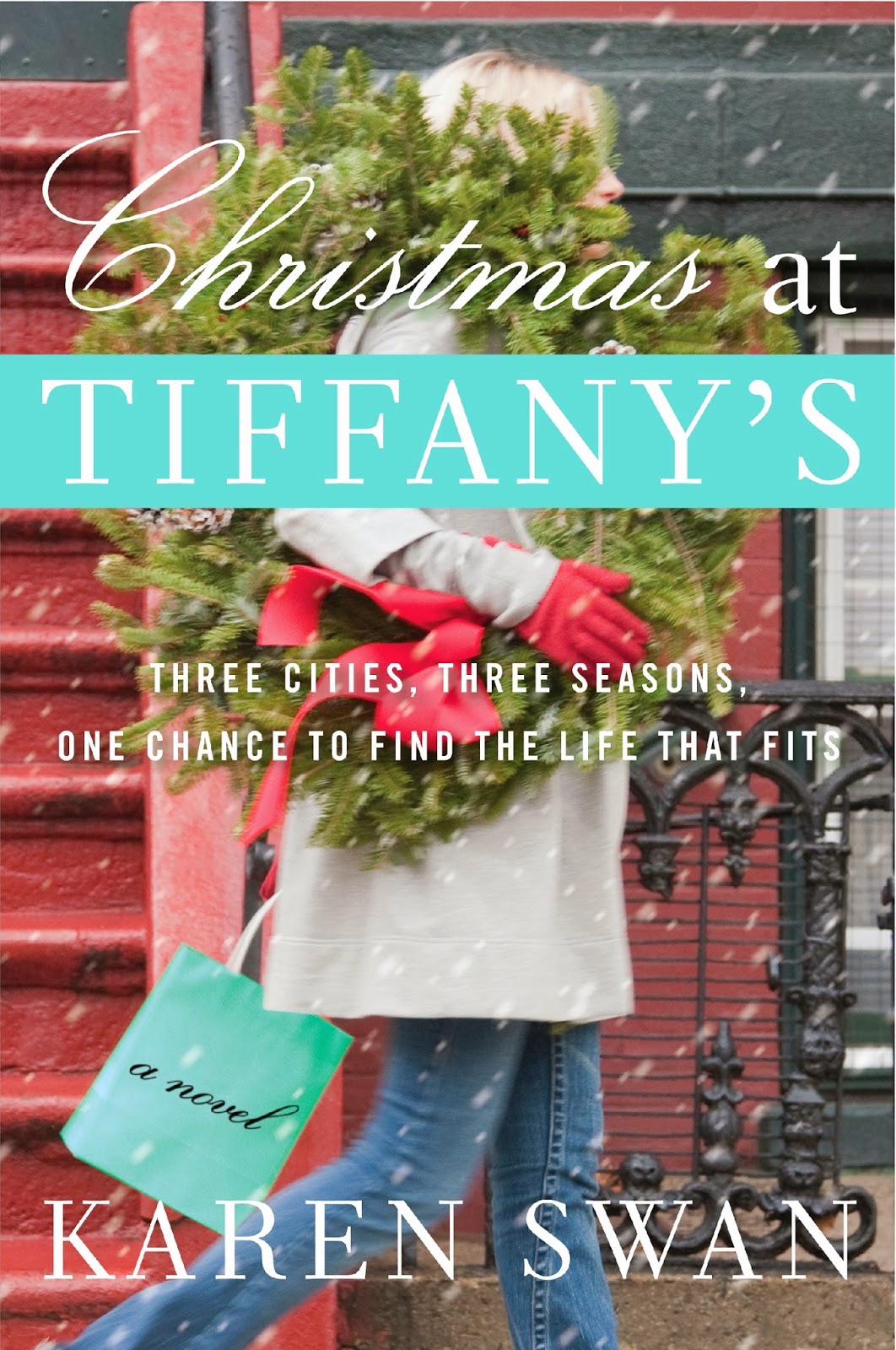 Christmas At Tiffanys is a story that picks up on the night of Cassie and Gil’s tenth wedding anniversary. They are throwing a huge party at their shooting estate in Scotland, but when Cassie discovers a secret her husband’s been keeping from her, it stops the marriage dead in its tracks. Having married young, she suddenly finds herself with no home, no career, no money, no identity of her own.
Her best friends, who have flown in for the party from London, New York and Paris, immediately close ranks around her but they can’t agree on what would be best for her – whose urban lifestyle would work for the girl who’s never worked and has spent the past decade in wellies? Eventually, they reach a compromise – Cassie will spend a season with each of them, allowing each friend to mould her to their vision of who she should be and so she  embarks on a year travelling from New York to Paris to London, trying on different lives, looking for the one that fits.

It’s the Christmas Eve scene in the Tiffanys store in New York. I had been struggling to work out exactly what to do with it and I knew I was waffling. I left Cassie standing by the Christmas tree whilst I went off to make a cup of tea; when I came back, the idea for what should happen next was a sudden little eureka moment. There it was, perfectly formed, ready in my mind to type. I was so delighted with it, I couldn’t believe I hadn’t thought of it earlier. In my opinion, nothing more perfect could happen in that store than what happens in that scene. You’d think my husband would have taken the hint…

Internationally I get to ‘see’ them although I don’t tend to interfere as every foreign market has a different flavour and I would never presume to be an expert on such things. However, for my ‘home’ covers, I do work closely with the Art department, mainly checking that the vibe and body language of the model corresponds with my heroine’s. The model doesn’t have to be matched to the heroine exactly but when readers pick up the book, the cover suggests a certain tone and energy and I like to be sure there’s no misrepresentation there.

I was lucky with this story. I grew up in London, so that was home for me then and I had visited Paris and New York frequently for the fashion collections when I was a fashion writer. I knew it was a world that people were interested in – the blogging phenomenon wasn’t around when I was a journalist (so ancient!) – so I was able to tap into my memories and use the parties and launches I used to go to as a spring board.
I had also happened to take my two sons to Paris for a couple of days, before I started writing. At that point I hadn’t pinpointed what my next book would be or where it would be set, but when I saw all the love padlocks on the bridge, Pont Des Arts, it gave me a seed of an idea…
I took my daughter to Paris this Easter and would you believe it, the love locks are now so out of control, they’re having to clear the bridges as they’re at risk of collapse. Funnily enough, I was writing the sequel to Christmas At Tiffanys at the time, so I was able to use that update too!

The afternoon I took my laptop down to the library and wrote a scene about two young mothers in a London garden, discussing their marriages. I had no further vision than that one scene - no bigger story idea, no plot or character path. But when I read it through, I realized it actually read well and that this was something I could do. It was a lot harder having to think up an entire story to wrap around that scene but I did it and it became my first book, Players.

I do have a distinct writing style that’s very recognisable to my readers but I would have to say my most pertinent writing quirk is giving my characters really quite offbeat names. I don’t do it deliberately but if a name isn’t right on a character, it really blocks me from seeing them properly. I have to go with whichever name suggests itself for the character I want to write. Sometimes I tell myself that I’ll simply change the name to something more pedestrian once I’ve finished writing, but I never do – by then, they’re as real to me as my children.

That you don’t need to know where you’re going with it, you just need to feel it. I know there are other writers who can micro-plot before they begin to write, but I prefer the more organic (for which read, chaotic) approach of getting to know the characters over a period of time and being led by them. Of course, I know roughly what’s going to happen and when, but all my very best ideas have been unknown to me, even seconds before I wrote them. There’s a sort of alchemy involved in writing a book – I never consciously know where I’m going with it all but at some very, very, very deep level in my mind, I must do, because the threads that I unwittingly lay down seem to miraculously plait together. Naturally, this brings with it a lot of unnecessary panicking that ‘it’ won’t work this time. My husband just hands me a glass of wine and nods a lot until I’ve finished fretting.

8.       What authors or friends influenced you in helping you become a writer?

So many people in my life told me I’d be a writer before I ever believed them – my teachers at school, my parents, my friends… but actually, it was my agent for a non-fiction book I’d written who really not so much encouraged as pushed me into giving fiction a go. I kept protesting saying I’d never done any creative writing courses, I’d never even written a short story, but the second I actually tried writing a scene pulled from my head, I absolutely knew it was what I was supposed to do. You could say I was the last person invited to that party!

9.       Does anything stand out for you during your career as an author, such as your first book signing, reader response, etc?

Going on live breakfast TV in Canada, for the first time, was a daunting experience but I’m not sure I’ll ever top standing in the spotlit ruins of the Colosseum, reading my work to 4000 people on a starry June night in Rome. My Italian publishers took me for dinner afterwards to the most incredible private courtyard restaurant where the most chic Romans you could ever imagine were dining. Woody Allen would have died on the spot. It wasn’t just one of the best nights of my career, it was one of the best nights of my life.

I am mad about skiing and dance and can’t imagine not having both of them in my life. I do pilates weekly and love walking my dogs on the forest where I live. It’s actually the same forest where AA Milne wrote Winnie The Pooh so I technically live in that literary wonderland – Hundred Aker Wood. I also read obsessively – to the point where I have to ration myself. When I read, my life stops and I completely inhabit the characters’, meaning I don’t do the shopping, no-one in my family gets fed, I don’t wash my hair…!

My latest book, Christmas In The Snow, is coming out in the UK, Commonwealth and Canada in November. Its set in Zermatt, in the Swiss Alps, and as the title suggests, it’s gloriously snowy and festive with lots of adventurous ski scenes and some hedonistic apres too. The story pivots round the discovery of a mountain hut, lost in an avalanche sixty years before and burying with it, a devastating secret.

I am also doing the final edits to my book for next summer which is called Tiffany Blue and is a sequel to Christmas At Tiffanys. It’s my first sequel in eight books and it was wonderful to go back and play with some of my favourite characters.

12.   How can readers connect with you online?

About the Book
In the wake of a heartbreaking betrayal, a young woman leaves the Scottish countryside to find her destiny in three of the most exciting cities in the world—New York, Paris, and London—in this funny and triumphant tale of fulfillment, friendship, and love.
Ten years ago, a young and naïve Cassie married her first serious boyfriend, believing he would be with her forever. Now, her marriage is in tatters and Cassie has no career or home of her own. Though she feels betrayed and confused, Cassie isn’t giving up. She’s going to take control of her life. But first she has to find out where she belongs . . . and who she wants to be.
Over the course of one year, Cassie leaves her sheltered life in rural Scotland to stay with her best friends living in the most glamorous cities in the world: New York, Paris, and London. Exchanging comfort food and mousy hair for a low-carb diet and a gorgeous new look, Cassie tries each city on for size as she searches for the life she’s meant to have . . . and the man she’s meant to love.

Karen Swan began her career in fashion journalism before giving it all up to raise her three children and an ADHD puppy, and to pursue her ambition of becoming a writer. She lives in the forest in Sussex, writing her books in a treehouse overlooking the Downs. Her first novel, Players, was published in 2010, followed by Prima Donna and Christmas at Tiffany's in 2011.