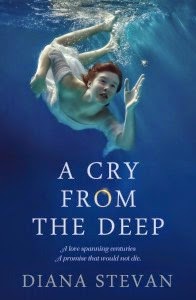 1.  Tell us about your release.
My debut novel, A CRY FROM THE DEEP,  a romantic mystery/adventure was released on Oct. 15th, 2014. I officially launched it at the Vancouver Island Regional Library, Campbell River branch on Vancouver Island, British Columbia, on Oct. 21st with a book reading and signing.
Purchase a copy from Amazon


2.  What makes your story special to you?
What's special about A CRY FROM THE DEEP is that this romance is genre bending, something uber agent, Donald Maass, says is what writing is about in the 21st century.
Not only is my novel about Catherine Fitzgerald's struggle to find true love as a single parent with child, it's also about her assignment as an underwater photographer to cover a hunt for one of the lost ships of the Spanish Armada. And if that adventure isn't enough, there's also the mystery about the antique Claddagh ring that Catherine buys before she leaves for the hunt. The ring seems to trigger nightmares and visions about a woman caught in a storm on an old sailing ship.
When I look back on my journey of writing this book, I'm not surprised it took over 6 years to write. There were so many elements that required extensive research.
I guess I could've written a simpler story, and written four books instead of one, but that's not who I am.


3.  When did you first realize you wanted to be a writer?
I first realized I wanted to be a writer when I was in my early twenties. I was married then, and had two small children. I joined the Manitoba Authors Association and tried writing a short story. I did publish a few newspaper articles on fitness and travel for major city newspapers, but being a practical person, I couldn’t see how I could help support the family by being a writer. So, I put my dream of writing on a back burner, got my Master of Social Work degree and worked as a family therapist for over 25 years. Over time, my writing filled dozens of journals, but publication waited until now.
4. What is a typical writing day like?
I don’t have a typical writing day. What is typical though is the fact I hit the computer first thing in the morning armed with a cup of freshly brewed coffee. I’ll check my social media accounts and my mail and then, if I have time, I’ll write something fresh or do revisions on something I’ve been working on. Because of family responsibilities over the years, I’ve learned to grab time when I can, so no day is typical.
5. Do you have an interesting writing quirk or habit?
As for any interesting writing quirk, I seem to be constantly writing notes to myself and filing them in piles which I review from time to time, often forgetting why I wrote the note in the first place. I guess that’s pretty quirky.
6. What was one of the most surprising things you learned as a published author?

One of the most surprising things I learned as a published author, is the fact that I got some great reviews. What I had hoped to achieve in the telling of my story actually worked. One of my reviewers is a professional with Kindle Book Review, and he totally got it. And he was a male, which was another lovely surprise. I had hoped that my story would appeal to both sexes and it seems it does.
7. What authors or friends influenced you in helping you become a writer?
I’ve been helped immeasurably by my writers’ critique group. Published authors—Kristin Butcher, Jocelyn Reekie, Shari Green, and Janet Smith—have read my bimonthly submissions and their comments have helped me become a better writer.
8. What does your family think about your career as a published author?
My family is thrilled about my career as a published author. Even my teen grandkids have said they are proud of me. What more can I ask for?
9. Besides writing, what other interests do you have?
Besides writing, I love painting in watercolors, acrylic and oil. I’m also an avid gardener and find much solace in my plants. I am fortunate that I live in a beautiful part of the world, where I have access to hiking trails, which my husband and I both enjoy. To take breaks from the computer, I also go swimming, play pickle ball and cycle. And a few times a year, my husband and I travel to see family and to places we’ve never been.
10. Can you tell us about what’s coming up next for you writing wise?
Next, is a long short story, which I hope to publish in January. It’s called THE BLUE NIGHTGOWN. I’m also looking for a publisher for a historical fiction I wrote, NO TIME FOR TEARS, a story inspired by my grandmother’s time in what is now Ukraine, during the Czar’s rule, WWI, the Bolshevik revolution and the Polish occupation between 1915 and 1929.
11. How can readers connect with you online?
Readers can connect with me at http://www.dianastevan.com and my Facebook author page at https://www.facebook.com/dianastevan.author
at November 21, 2014

Thanks, Shari, I also wanted mention that I can be reached on Twitter as well. @DianaStevan And thanks again, Patti, for the opportunity to talk about my book.