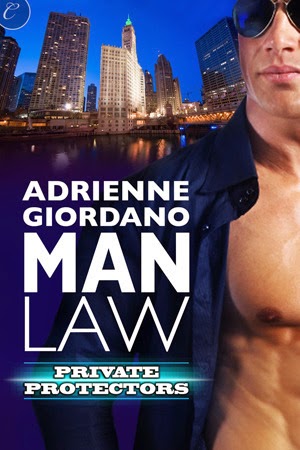 But he can't deny his irresistible attraction to Gina Delgado, a young widow with three kids and plenty of strings attached. Even so, having a physical relationship doesn't mean they're "in a relationship."
Gina lost her husband to tragedy; she is not getting emotionally involved with another man in a dangerous profession. Sleeping with Vic is just stress relief.

Until one of Vic's assignments goes wrong and the target selects Gina and her kids for revenge. There's nothing Vic won't do to protect Gina and the children--the family he realizes, too late, he wants. He'll accomplish his mission but will he have lost his only chance at true love?

Where to buy a copy:  http://adriennegiordano.com/book/2/Man%20Law 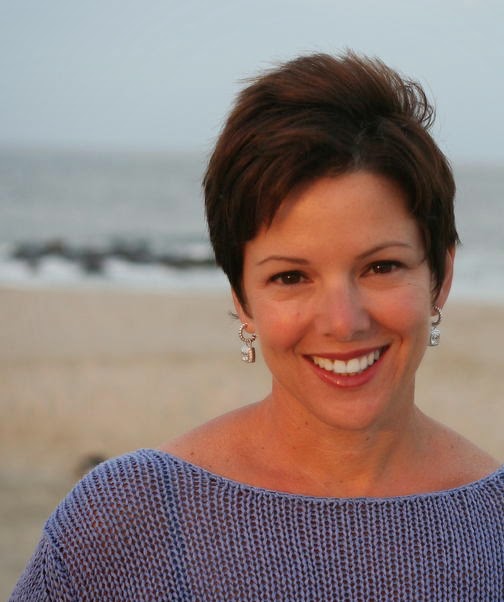 “Ah, shit.” Vic Andrews, butthead supreme, listened to the churn of the ocean’s waves. Or was it his life skittering off its axis?
Gina laughed that belly laugh of hers and he couldn’t help smiling. He extracted himself from her lush little body and rolled off. The St. Barth sand stuck to his back. Yep, they’d worked up a sweat. Salty sea air invaded his nostrils and he inhaled, letting the moisture flood his system.
Jesus Hotel Christ.
What had he been thinking? He’d been heading back to his room after closing down the resort’s bar and there she was, the girl—er, woman—of his dreams, crying on the beach. No condition for her to be in after witnessing her brother’s marriage to the love of his life.
Vic didn’t mention the fact it was 3:00 a.m. and she was alone on a secluded beach where any drunken asshole, like him, could have at her. Although technically he wasn’t drunk. Buzzed maybe. Big difference. Besides, they’d been at a wedding. Buzzed was allowed.
Gina moved and he finally turned toward her. “I’m—”
“No, absolutely not,” she said. She swiped at her curly mane of dark hair. Her face gave away nothing, but that meant squat. Gina knew how to hide bad moods.
The whoosh of the ocean lapping against the shore distracted him and he stared into the blackness.
“What did I say?” he asked.
“You were going to apologize. I don’t want to hear it.”
Apologize? Him? “I’m not sorry.” He touched her arm. “Are you?”
Please don’t say you’re sorry. Please.
That would be all he needed. He’d just freakin’ obliterated the sister rule Mike had invoked nearly a million—maybe two million—times. The sister rule was Man Law, and Man Laws were about the only rules Vic followed.
He only wanted to check on her, and before he knew it, voila, the clothes were off, the condom was on and they were humping like bunnies right there on the beach. At least no one saw them. All the well-meaning people were asleep.
Gina brushed sand from her legs and stood to straighten the sliplike dress he’d shoved up over her hips. The silky fabric glided over her curves, and the activity in Vic’s lower region made him groan. A thirty-five year-old mother of three, and she was killing him. He should be ashamed.
Screw that.
She was right there. Right there. And, because he’d probably never get the opportunity again, he should grab her and—
“I’m not sorry,” Gina said. “Not about the sex. I’m sorry about other things, but this, I loved.”
Vic retrieved his pants and stood. Gina and her honesty. Good or bad, she just put it out there and didn’t worry about the repercussions. He guessed it came from losing her husband at the age of thirty-one. She had nothing to lose.
“I need to go,” she said, watching him with her big brown eyes as the moonlight drenched her face. He put his shirt on. Did she have to look at him that way? Particularly when he wanted a replay.
“Aren’t the kids bunking with your folks?”
“They are, but you know how Matthew is. He might search for me.”
Fifteen-year-old Matt, her eldest son, took his job as man of the family seriously.
“Right. Okay.” Vic motioned toward the resort. “I’ll walk you.”
Gina held up a hand. “I’ll be fine.”
Nuh-uh. No way. “I am going to walk you. It’s late and you shouldn’t go by yourself.”
Hell, she shouldn’t have been out here alone in the first place, but he knew she’d tear him a few new ones if he said it.
She stood there, peering up at him and—God—she was fantastic. She had a classic oval face with high cheekbones and a nose he knew she hated. For over two years now he’d imagined running his finger over the little bump in it, but never dared. Every inch of her seemed perfectly imperfect.
Blown sister rule.
Gina shoved her fingers through her curls. “We screwed up. I can’t believe it. We’ve been so good.”
“We didn’t screw up. We had a simultaneous brain fart. Again.”
She laughed and shook her head.
“Anyway, walk me to the edge of the beach. You can see my room from there and can watch me go up.”
“Gina, what’s the big deal? Nobody will know we just—” he waved his hand, “—you know.”
“It’ll be better if you don’t walk me. With his mental radar, Michael is probably waiting by the door. On his damned wedding night. I swear he’s a freak. He should stay out of it.”
Oh, boy. She was getting fired up. Maintenance mode. His friend needed protection. They were both ex-special ops, but they didn’t stand a chance against all five foot three of Gina.
“Mike loves you. He’s trying to protect you.”
“From you? You’re his best friend.”
Vic ran his hands over her shoulders. “Yeah, but I’m not right for you.”
“The circumstances aren’t right. That’s true, but he doesn’t have to keep reminding me.”
“He does it to me too.”
They strolled to the edge of the beach, and he squeezed her hand. Don’t go. Just stay for a while. All he wanted was more time with her. Not a lot to ask.
On tiptoes, she brushed a kiss over his lips. A little hum escaped his throat. What the hell was that?
“I had a great time,” she said. “You were just what I needed.”
“I think a ‘but’ is coming.”
“We can’t do this again.”
Yep. Not good. “I know.”
She pulled her hand from his and hauled ass toward her room. Away from him.
He waited while she went up the stairs and she stopped in front of the window of the room next to hers. A minute later the door opened and Matt came out. He turned and, apparently using his Spidey sense, looked straight at Vic.
And we’re busted.