HEATING IT UP, ONE HERO AT A TIME...with Lane McFarland! 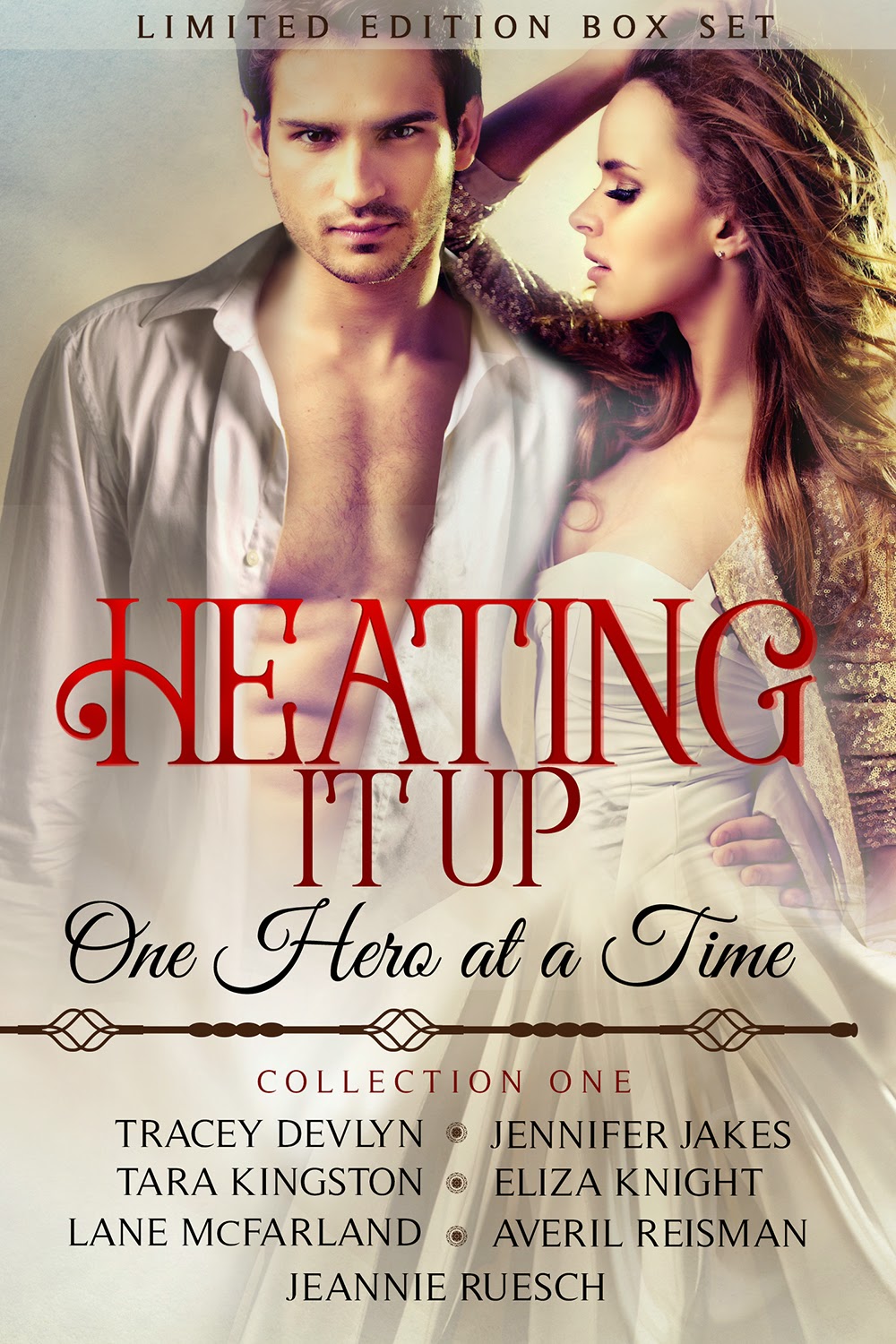 NIGHT STORM by Tracey Devlyn
A promising young apothecary picks up the pieces of her life, only to collide with the ruthless thief-taker who once shattered her dreams and her heart.

RAFE'S REDEMPTION by Jennifer Jakes
He rode into town to buy supplies, not a woman…

SECRETS, SPIES & SWEET LITTLE LIES by Tara Kingston
A heart's destiny cannot be denied when a daring Union spy abducts a beautiful runaway bride he suspects of being a traitor.

THE HIGHLANDER'S TEMPTATION by Eliza Knight
A warrior on a mission is tempted by an alluring lass, and though she's been forbidden she'll break every rule for the pleasure of his
intoxicating kiss.

THE CAPTAIN'S TEMPTRESS by Averil Reisman
Blackmailing her way onto a ship of gunrunners bound for the Caribbean, Samantha Etheridge proves to be more than a mere opportunistic reporter to Captain Sean Nolan--perhaps even a first mate.

A ROGUE'S DEADLY REDEMPTION by Jeannie Ruesch
Proving his worth to the woman he loves might cost them both their lives. 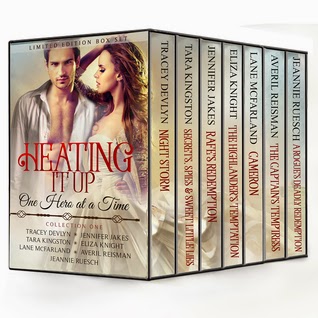 While gathering herbs, Cameron manages to become stuck in a tree.
That’s when she meets Robert…

Several men on horseback rode in her direction.
The man in front sported the Graham’s crest on his saddle. She inhaled sharply. Oh, Lord. Did they return for more trouble? What would they do if they spotted her? Vulnerable and unprotected, her pulse hammered, her body trembling. Perhaps, if she remained quiet, they would pass without noticing her perched high in the tree.
As if he heard her thoughts, the leader of the group turned his head and met her eyes. He held up a hand, and the men stopped. His brows drew together. He nudged his mount toward her and cocked his head to the side, puzzlement reflected in his brown eyes.
Her heart thumped wildly at his brazen inspection. His gaze raked her from head to toe, before coming to rest on her breasts. Her back straightened. How dare he examine her with such boldness.
Dark, shaggy hair hung to his broad shoulders with a single braid on either side of his face. Black stubble lined his cheeks and strong chin. The opening of his tan tunic revealed dark, curling chest hair, and the grey trews hugging his thighs disappeared inside his worn boots. A black and blue plaid draped his shoulder and rested under his leather belt. He crossed his hands on the saddle and raised his brow, as if he expected an explanation.
Cameron swallowed hard. Could this be Robert Graham? Why was he here? Given his outrageous stunt with Da’s bull, what more could he want? The Grahams had severely wounded Fergus over that beast. Her ire rose, and she looked down her nose at the men. She would do her best to regain her composure; however, it wasn’t easy to remain dignified while stuck in a tree.
His gaze dropped to the fallen ladder. A grin spread across his handsome face. To her horror, he threw a leg over his saddle and slid to the ground. The twinkle in his eyes clearly displayed his delight in her predicament.
Her back straightened. “What do ye want? To cause more mayhem like yer dim-witted stunt of stealing my da’s bull? Do ye know what harm ye did? Do ye even care?”
One of the men scoffed. “Mayhem? Did ye hear that, Robert?”
So he was Robert Graham.
He advanced toward her. “Aye, I heard. But yer da was the clever fool who caused the bedlam, mistress. He had no reason to strap on his sword.”
Her breathing quickened, and her nostrils flared. “Da tried to recover his property. Ye were the ones who instigated the attack.”
He shook his head. “I see ye think like the rest of yer clan. So it’s fine for yer da to smear pig-slop over our new smokehouse and not suffer the consequences?”
“Consequences? That is what ye call yer senseless act?”
“Well, aren’t ye the bold one?” the other man behind Robert jeered.
Robert paused, his hands firmly affixed to his hips. “Do ye think it wise to insult and berate someone who can help ye out of that tree?”
He did have a point. “I don’t need yer help. I can get down whenever I want.”
“Can ye now?” The man peered at the fallen ladder, the basket of scattered elder leaves and then back at her.
She lifted her head a notch higher, bobbing slightly with confidence she didn’t feel. “When I’m ready to be down.”
He propped the ladder against the tree.
She clutched her chest. “I’m fine, truly.”
He climbed the first couple of rungs, and the corners of his mouth tugged up, dimples pressing into his rugged face. “Aye, ye are that, but ye need my help, lass.”

While I write historical romance, spanning the early Middle Ages through the American Civil War, my heart has always been drawn to the medieval period, particularly in Scotland, Ireland, and England. Escaping into a world of brawny Highland warriors and feisty lasses as they fight for independence and stories of daring pirates, raiding Vikings, and valiant knights, transport me to an era filled with strife and hardships only to be overcome by everlasting love.

Independent, feisty heroines matched with courageous, fearless heroes and passion that flares between them. 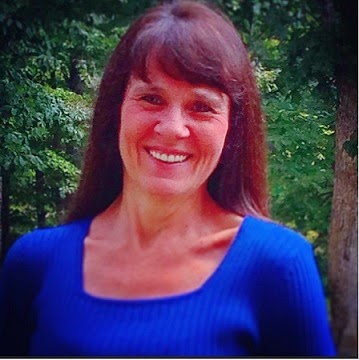 Starting out as an accountant in line with the rest of the corporate echelons struggling up the proverbial ladder, I soon realized the long nights and numerous weekends of closing books and reporting financial results no longer appealed. So, I decided to hit the road selling financial software. Jumping from one high-pressured frying pan into the other, the stress of the road- warrior life and constant deadlines took its toll. I needed a release and found that with my face buried in historical romance books, I could escape to worlds of intrigue with timeless love and happily-ever-after endings. Today, I am fortunate to have found my true passion in writing of spirited heroines and to-die-for-heroes and the romantic love stories between them.

I am a southern girl living on top of a mountain in North Georgia, and I’m most happy when surrounded by family and friends. If I am not writing, you can find me hiking with my husband, or fiddling around in my flower and vegetable gardens, feeding the birds and watching black bears and deer. I am blessed to have a wonderful son—my pride and joy, my buddy who, along with my husband, have made my life complete.

Thanks, Lane, for participating in this Heating It Up Blog Hop. What a great array of authors and stories..."right up my alley"! It's wonderful it's just before the holiday season begins too. Thanks for the post. jdh2690@gmail.com

Liked the excerpt Lane, one of my favorite romance eras. Looks like a box set for me, some authors I know and more new ones to meet. Happy Holidays!