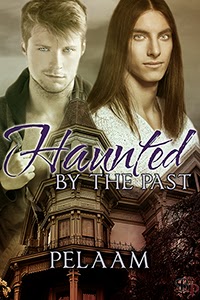 Blurb for HAUNTED BY THE PAST:


Jared didn't believe in ghosts or love, until he moved into his new house and found both.
Finding a house that suits him, Jared makes the move to reclaim his independence.  However, he doesn't expect to find himself both attracted to and concerned for the almost-reclusive gardener, Evander.
Jared believes Evander is hiding an eating disorder. But the appearance of old photographs and love letters in the house cause him to wonder about the stoic man. As their friendship becomes more, he wants to help and uncover the secrets he knows Evander is hiding. Each of them are haunted by something, and it's not the house.
When a ghost from Jared's past appears, they must fight for their own happiness, even if it means exposing themselves and the truth.

Excerpt:
A couple of hours later, Jared returned. Hands on his hips, he glared at the thick, muddy mess on his boots. No matter, the hose is right there. I'll switch on the tap, rinse the worst of the mess off, and carry them into the house to clean properly. Blindly, Jared reached around the corner with one hand as he crouched down to snag a hold of the hose with the other.
With a surprised grunt, he fell back onto his butt. His hand hadn't come into contact with cold metal but cool flesh. He stared up at the man who stepped into view. His dark hair was pulled back into a pony tail, and from this angle the man looked like he towered over six feet.
For someone who worked outdoors, his skin was remarkably fair, and the expanse of pale, smooth skin temporarily robbed Jared of his wits. His eyes seemed determined to focus on either caramel colored nipples or the 'v' lines disappearing into well-worn denim. The man stared down at him, and Jared wondered what kind of impression he was making sitting open-mouthed in a mud puddle.
"I...you startled me." Great opening line. Real smooth, Jared.
"I was about to clean the equipment. You were out."
The stranger's voice was soft, his expression morose, and he tilted his head as if Jared's appearance was a shock to him too. His eyes were a shade of gray Jared had never seen before, and they reflected concern and intelligence.
"Ah, yes, I did go out, but I wandered off the track, got stuck in mud, and since my boots were covered in the stuff, I decided to come back. When I saw the hose, I thought I'd rinse them off before going back into the house."
"Oh. Well. I can wait if you want."
Jared blinked. That's it? He isn't even going to help me?  "Um, could you help me up?" Considering he'd spent the best part of the last six months not wanting anyone to look twice at him, he couldn't understand why it was suddenly so important that this man did.
"I guess so." The man held out his hand and pulled Jared upright with an ease his slender frame belied.
Now standing up, the difference in their height diminished rapidly. In fact, they stood almost shoulder to shoulder, the stranger was maybe an inch or so taller than Jared's modest five foot ten inches. "I'm Jared, the new tenant here. Obviously, you're the gardener, but I wasn't told your name."
"Evander. My name's Evander."
Neither man released the hand of the other. Jared wasn't sure he wanted to be the first to let go, but Evander seemed to realize he still held Jared's hand and released him. He took a couple of steps back.
"I have other things to do. You can use the hose."
Bio:

Pelaam lives in clean, green New Zealand. She is a multi-published author of gay male romance and erotica across time and space. When not writing, she indulges in her other passions of cookery and wine appreciation. She can be found on Facebook, and a full list of her published works are on Lazy Beagle Entertainment.